For more than five hours on Wednesday, the House Judiciary committee indulged itself in questioning Big Tech’s marquee executives over anticompetitive practices. But the biggest question still hangs in the balance: What will Congress do to address these issues? The last time the U.S. public saw something like this was […]

For more than five hours on Wednesday, the House Judiciary committee indulged itself in questioning Big Tech’s marquee executives over anticompetitive practices. But the biggest question still hangs in the balance: What will Congress do to address these issues?

The last time the U.S. public saw something like this was more than two decades ago, when Congress looked into Microsoft’s software business. At the time, the company wound up negotiating its way out of any overt monopoly-busting measures.

With a collective market capitalization in the neighborhood of $5 trillion, the big four that are under the microscope now — Alphabet, Amazon, Apple and Facebook — will likely evade a Ma Bell-type break-up. Their online platforms have been left alone for so long now that they’ve become far too complex, widespread and fundamental to modern life that they can’t be easily carved up into regional operators.

None of that is surprising. What might be is that House representatives, after an investigation that stretched back more than a year, finally seem to realize this, too.

After all, Amazon is not just a marketplace or an electronics maker. And Google’s not just a search engine or mobile platform maker. Neither is Facebook a mere social network, nor Apple solely an iPhone creator.

They are also powerful data companies, putting the scrutiny on how they use that data — in other words, whether they wield it to create unfair advantages, squash competitors or compromise privacy for the sake of revenue.

House Judiciary chairman Rep. David Cicilline (D., R.I.) summed it up at the top of the hearing:

“Apple is a dominant provider of smartphones, with more than 100 million iPhone users in the United States alone. In addition to hardware, Apple sells services and apps, including financial services, media and games.

“Lastly, Google is the world’s largest online search engine, capturing more than 90 percent of searches online. It controls key technologies and digital ad markets and enjoys more than a billion users across six products, including browsers smartphones and digital maps.”

And Cicilline noted that their already massive successes and power likely ballooned during the coronavirus pandemic, all while mom-and-pop businesses faced an unprecedented crisis.

Some of the ceo’s tried to argue that they still face steep competition. In Jeff Bezos’ opening statement, he pointedly listed Amazon’s market competitors, and when it came to Walmart, he noted that it’s “more than twice Amazon’s size” with first-quarter online sales that jumped 74 percent.

He also enthusiastically talked about how Amazon opened the gates for third-party sellers, but not everyone was sold. Under questioning, Bezos said the company prohibits the use of third-party seller data to inform Amazon’s own private-label business, but couldn’t guarantee that it enforces the policy.

Rep. Kelly Armstrong (R., N.D.) specifically asked about aggregate seller data and whether Amazon uses it to inform its own products, even if it comes from just two or three sellers. In a surprisingly candid moment, Bezos responded, “Yes, sir,” acknowledging that it does.

Facebook founder and chief executive officer Mark Zuckerberg took up the competition argument as well, explaining that “our services are about connecting people and our business model is advertising, and we face intense competition in both.”

What complicates matters is that there are more than just four platforms in the crosshairs here.

For instance, on mobile, Facebook and its family of apps rely on distribution through Google Play and Apple’s App Store, whose owners also run most of their key rivals. “The most popular messaging service in the U.S. is iMessage,” Zuckerberg said, referring to Apple’s Messages app. “The fastest-growing app is TikTock, the most popular app for video is YouTube, the fastest-growing ads platform is Amazon, the largest ads platform is Google. And for every dollar spent on advertising in the U.S., less than 10 cents is spent with us.”

But that position hardly addresses the fact that, in document after document referenced by the committee, Facebook executives detail how they look to either copy or buy emerging challengers to stave off competition. Again, this is not a shocking revelation, especially to anyone who knows the giant’s reputation among Silicon Valley insiders.

The heat pointed at Alphabet’s ceo Sundar Pichai seemed lukewarm by comparison. But it did address some of the biggest questions swirling around Google — including whether it allows political bias, or the decidedly liberal preferences of his employees, to play into the company’s platform and business decisions. Meanwhile, Apple got by mostly unscathed, though ceo Tim Cook finally had to face questions over whether it treats developers fairly or rejects third-party apps that compete with its own software. Naturally, he believes Apple acts in the best interest of its users, as well as developers.

Still, watching elected officials poke these executives must have been vindicating for critics who have been making the same complaints for years in places like message boards and social media posts. Now it’s up to Congress to figure out what to do about them.

Strangely enough, these executives want some sort of guardrails for the tech sector. They’ve all issued statements on this front: Bezos and Cook want more scrutiny, while Zuckerberg and Pichai asked for more regulation. In some ways, such action might let them off the hook from having to make hard decisions. In other cases, they might see value in creating headaches for fellow tech giants.

The rivals also agreed on a few other matters. Under oath, they promised not to stand for forced labor among their vendors, and they all committed to improving the heavily white, male composition of their executive leadership.

It’s no guarantee these companies will become completely fair or just. But at least it’s a start.

How to Buy Your First New or Used Car

Thu Jul 30 , 2020
Consumer Reports has no financial relationship with advertisers on this site. Teens might love the freedom a first car can bring, but it also brings a lot of responsibility. They need to be ready for significant expenses even after figuring out how to pay for the car. There’s fuel, maintenance, […] 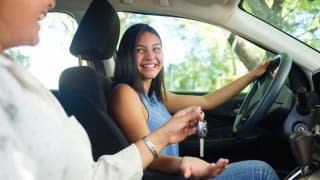