The Calgary Police Service has set up checkstops during the month of September to crack down on improperly maintained vehicles — and it has prompted a strong reaction from Calgarians on social media. The Safer Vehicles Initiative is intended to ensure that vehicles meet safety standards and comply with the Traffic Safety Act, according to CPS. […]

The Calgary Police Service has set up checkstops during the month of September to crack down on improperly maintained vehicles — and it has prompted a strong reaction from Calgarians on social media.

The Safer Vehicles Initiative is intended to ensure that vehicles meet safety standards and comply with the Traffic Safety Act, according to CPS.

It involves inspecting cars at checkstops for issues such as bald tires, windshield cracks, improperly tinted windows and burned-out tail lights and headlights. About 1,000 vehicles have been stopped so far.

“We have a responsibility to ensure vehicles meet safety standards and … we will be educating motorists and enforcing infractions when appropriate,” CPS said about the initiative on Facebook.

However, some fines have led to Calgarians crying foul — including a $162 ticket shared on Twitter that people said was for low washer fluid.

“People are barely [scraping] by right now and this is the CPS’s priorities … [this is a] cash grab,” another user replied.

Acting Sgt. Chris Agren, who is with the traffic section, spoke to CBC News about tickets like these.

He said the ticket in question was posted without context, and that there were other issues with the vehicle.

“I believe that ticket was for ‘failed to maintain equipment,’ which is kind of a catch-all. It was because there were multiple things occurring, and not just that. And so, unfortunately, that was taken out of context,” Agren said.

“There was a couple other vehicle equipment regulations, things that were not quite in line.”

So if tickets for “failure to maintain equipment” is a catch-all, what exactly does it entail?

According to Agren, police are checking for issues drivers should be able to notice themselves, or alterations that make vehicles unsafe.

“We’re basically looking [at] the obvious condition of a vehicle. We’re just looking to see what is occurring on a vehicle that basically any person walking around a vehicle would notice,” Agren said.

“We’re looking for vehicles that have been altered — are their wheels sticking way out, are they missing mud flaps … and just basically overall condition.”

While motorists can always be stopped in Calgary for a burned-out tail light, Agren said that the police have decided to set up the checkstops in order to talk to as many motorists as they can at one time to alert them to safety issues.

“Our goal here is to work with the motoring public and the citizens of Calgary. We’re not nickel and diming everybody,” Agren said.

“We’re just trying to have a conversation about what should be repaired, and perhaps some people with multiple things that are occurring need to be reminded a little bit more.”

Majority of drivers get warnings, not tickets, police say

As for the criticism that introducing the likelihood of tickets and fines when many Calgarians are struggling, both financially and emotionally, in the midst of a pandemic, Agren said the police are not trying to inconvenience anyone.

The majority of drivers are let off with warnings, not tickets, Agren said.

He noted those who do receive tickets can challenge them if they believe it is unfair, or explain their circumstances.

“Generally, if people have any sort of concerns with that, that’s why our court systems exist … so that people can ask for time to pay, they can ask for reductions in whatever the amount is, and they can plead their case,” Agren said.

“Having said that, we are … talking to people more and more in regards to warnings than actually fining people for things.”

The Safer Vehicles Initiative will run to the end of September, when it will then be reassessed, Agren said.

Sun Oct 11 , 2020
Jeep has created a driving school called Adventure Academy to show owners how to explore the great outdoors without getting stuck in a rut. It’s open to all motorists who own one of the brand’s four-wheel-drive models, whether it’s a CJ-5 or a Gladiator, and Jeep notes the courses are […] 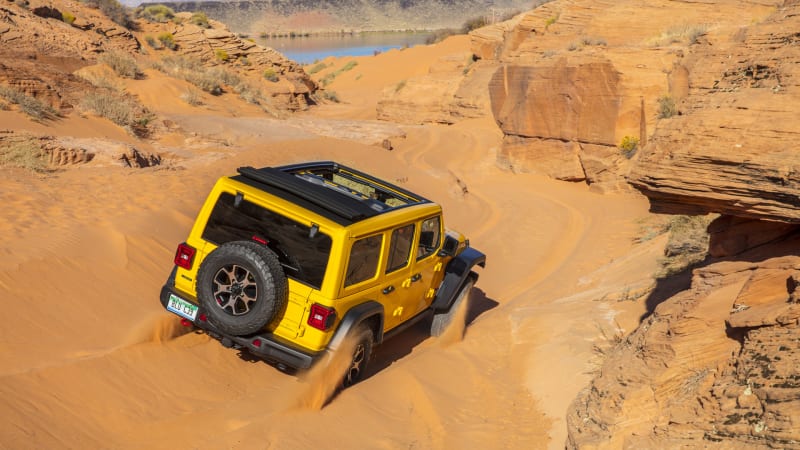