Elon Musk laid out a plan for

to build a cheap electric car using drastically lower-cost batteries to make a $25,000 vehicle and potentially turn the company into the world’s largest auto maker.

The electric-car maker’s chief executive said Tuesday he was targeting eventual annual production of 20 million vehicles, or almost twice as many as

The ambitious production figure, given at a presentation to investors near the company’s Fremont, Calif., assembly plant, came without a precise timeline or budget. It is the kind of shoot-for-the moon goal that has previously excited investors to make Tesla the world’s most-valuable car company despite selling just 367,500 vehicles last year.

Shares in after-hours trading fell more than 6% as Mr. Musk said it could take three years to fully see the large battery cost reductions that he detailed.

Mr. Musk has a long history of making grandiose claims, some of which have been conveniently forgotten, including promises around robot vehicles and missed production goals. But he gained traction and credibility after opening a new factory in China and posting four consecutive quarters of profit after several years of struggle as he worked to deliver the Model 3.

The compact car represented his long-pursued bet that the company could build and sell an electric car for $35,000 to usher in a new age of electric vehicles. But the Model 3 is still too expensive to be considered an everyman’s vehicle. It was briefly priced at $35,000, though on average sold for about $50,000 last year.

“One of the things that troubles me the most is that we don’t yet have a truly affordable car, and that is something that we will make in the future,” Mr. Musk said Tuesday. “But in order to do that, we’ve got to get the cost of batteries down.”

Battery technology is the secret sauce behind the electric-vehicle revolution. As more auto makers compete in the market and try to persuade customers to abandon their gas-powered vehicles, companies are pushing to overcome two hurdles to the mass appeal of electric cars: price and performance.

During the presentation near the Fremont plant, the company said it plans to achieve advances in cell manufacturing and chemistry that will allow it to more than halve battery costs.

So-called Battery Day began soon after Mr. Musk addressed Tesla’s annual shareholders meeting, its first such gathering since the pandemic struck. After Tesla increased deliveries 50% last year, Mr. Musk told shareholders he expected 30% to 40% growth in 2020 even as the pandemic briefly shut down its U.S. plant and, he said, made this “the most difficult year of Tesla’s existence.” Early this year Tesla forecast more than 36% growth.

The gathering, which had been delayed by the Covid-19 outbreak, was open to a limited number of in-person investors who were seated in Tesla cars parked in front of a stage that was framed by the company’s future products.

Mr. Musk called it the “Tesla drive-in movie theater.” He joked, “It’s a little hard to read the room with everyone being in cars,” even as he was received by a chorus of honking horns.

While Mr. Musk didn’t detail the exact cost per kilowatt-hour of battery cells, his projected savings of 56% to be fully realized in around three years would suggest a price far below the $100 per kWh threshold generally accepted for electric cars to reach price parity with gas-powered vehicles. Tesla’s cost of cells for the Model 3 are around $100 per kWh, according to estimates by Benchmark Mineral Intelligence.

The Palo Alto, Calif.-based electric-car company plans to begin building its own battery cells in 2022 at a volume that would be roughly triple the amount of cells it got last year from its giant factory in Nevada.

Seventeen years after betting that common laptop batteries would be the trick to ushering in a new age of electric vehicles, Tesla has steadily worked to reduce costs and improve vehicle range as it has faced competitors with cheaper-to-make, internal-combustion-engine vehicles.

Tesla on Tuesday showed off a new, biscuit-tin-shaped cell that, experts said, could allow the company to save money because they are faster to manufacture and use fewer materials while storing more energy. It would improve vehicle range by 16%, said Drew Baglino, Tesla senior vice president of powertrain and energy engineering. Such cells are still in pilot production near the Fremont assembly plant and, he said, will take a year to reach capacity.

Other changes—from battery chemistry to how the pack is made—will together reduce battery costs per kWh by 56%, according to Tesla, while boosting range by 54%.

Tesla isn’t alone in its appetite for car batteries as rival car makers ramp up their electric-vehicle investments. Global demand for lithium-ion batteries is expected to rise to 800 gigawatt hours in five years from 117 GWh last year, according to Benchmark; the industry average for large contracts of cells was $125 per kWh in 2019.

The performance has spurred huge demand in Tesla’s stock, which has roughly quintupled this year, and made the company the highest-valued car maker, even though its production volume is still far behind the likes of

After Tuesday’s presentation, Mr. Musk took to Twitter, endorsing an estimate made there that Tesla would boost production almost 50% annually this decade. “Maybe a little faster,” he wrote. That would suggest more than 20 million units in 2030.

Mr. Musk’s ambitions for millions of annual car sales have driven him to further expand the company’s production capacity. Tesla is building its first-ever European car assembly plant, outside Berlin, and has begun work on a second U.S. assembly factory, in Texas. The company began production late last year at its first assembly plant outside of the U.S., in China, where Mr. Musk on Tuesday said output could eventually exceed one million vehicles annually.

Though Mr. Musk has struggled, at times, with manufacturing, on Tuesday he sounded a familiar boast. “Eventually every car company will have long-range electric cars,” Mr. Musk said. “But not every company will be great at manufacturing.”

Why halt a classic car event and not a BLM rally?

Fri Sep 25 , 2020
Published: 9/21/2020 10:19:04 AM I read with interest in Sept. 7’s newspaper of a protest about the Kenosha incident of a Black man being shot while resisting arrest. This protest went from Sheldon Field and ended up at the Northampton Police Department. It noted a crowd of hundreds attended. I […] 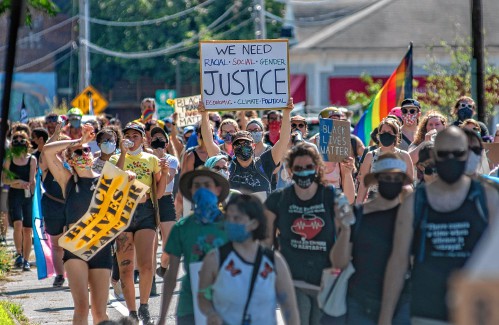