MILWAUKEE – On a Thursday morning in mid-March, Darren Bush was poised to open Canoecopia, the largest event of its kind in the world. Bush, the owner of Rutabaga Paddlesports in Monona, Wis., was nervous about the emerging threat of COVID-19, but safer-at-home had not yet been implemented.  Vendors from […]

MILWAUKEE – On a Thursday morning in mid-March, Darren Bush was poised to open Canoecopia, the largest event of its kind in the world. Bush, the owner of Rutabaga Paddlesports in Monona, Wis., was nervous about the emerging threat of COVID-19, but safer-at-home had not yet been implemented.

Vendors from across North America were setting up 250,000 square feet of canoes, kayaks, paddle boards and other outdoor gear for the three-day trade show scheduled to begin the next day, Friday the 13th, at the Alliant Energy Center in Madison.

Months of work had gone into the planning. About 20,000 people were expected to attend.

Then, Bush got word that Gov. Tony Evers was having a press conference where he declared a public health emergency.

On that Thursday, he needed to step away from the pressure of organizing Canoecopia, where scores of small business owners and sales people counted on his decisions. He needed some time to clear his head and come to terms with this new coronavirus.

He and his wife, Stephanie, sat on their bed and made a “pros and cons” list about whether they should go forward with Canoecopia. Then they prayed.

The sudden decision could have wiped out the family-owned business. However, Bush knew that if he held the show it could worsen the spread of COVID-19 in towns across the country.

“With that many folks coming from all over, we were going to kill some people,” he said. “I told Stephanie, if we go bankrupt then we go bankrupt. It’s only money.”

And, indeed it was very rough for a while. Sales plummeted at Rutabaga, which under safer-at-home was closed during the busiest part of the year. Online sales, then curbside pickup and home delivery kept the family-owned business afloat. Hundreds of customers stepped up to buy gift cards, showing their support for the shop that’s been a fixture on Madison’s south side for decades.

Maybe it was good karma for the rest of the outdoor sporting goods industry as sales of many products have roared back in the last couple of months.

Across the nation, bicycles, kayaks, paddle boards, camping gear, even backyard toys like trampolines and pool floats are in hot demand and short supply.

More: 5 bike trails near rivers that are perfect for a pedal and paddle trip

“We are on this crazy trajectory that we have never seen before. We just don’t know where it’s going,” said Bill Kueper, vice president of Wenonah Canoe, in Winona, Minnesota.

He was in Madison that Thursday when Bush canceled Canoecopia. His booth was already set up and he was excited to get the paddling sports season under way with the massive consumer trade show.

When it was canceled, some vendors broke down in tears. They supported the decision, and even gave Bush a round of applause when he announced it, but they were badly shaken.

“You could not have put more fear into the outdoor industry, or the paddle sports industry specifically, than having to shut down retailers right at Canoecopia. Across the United States and Canada, it’s the event that triggers the start of the season,” Kueper said.

“At that point, we didn’t know how small businesses would survive,” he said.

But now the Wenonah factory is so busy, there are weeks of orders on backlog. Maybe it’s pent-up consumer demand, or people desperately wanting to get outdoors, or the lifting of COVID-19 restrictions, but canoe and kayak makers are breathing a deep sigh of relief.

“We are doing everything we can to save summer,” Kueper said. “May was fantastic. And, June, well I can see it in people’s faces. They’re working hard, and we are having a great month.”

Kueper turned the company conference room into a “war room” stuffed with masks, gloves and other protective gear for employees. He’s been working on the factory floor himself, in addition to his regular job in the offices, but credits everyone else for the rebound in manufacturing.

“I am incredibly proud of this team,” he said. “When we get into the hotter days, wearing a face mask while standing over a 600-degree factory oven is not a comfortable thing.”

Still, the outdoor sporting goods industry isn’t out of the woods just yet as retailers struggle to make up for months of lost sales in a business that’s seasonal by nature.

“There’s a big asterisk by this entire year because we have nothing to compare it to,” Kueper said. “But I think we are in a bull economy. There’s money flowing through it and people are coming back and trying new things. Whether it’s paddling or cycling, we are going to create some new enthusiasts who are going to become evangelists for our activities.”

Coronavirus shut down outdoor-gear factories across the U.S. and Asia for months, and some products remain back ordered until at least fall. The empty bicycle racks in big-box stores are a chilling reminder of the pandemic’s impact on global manufacturing. Smaller specialty stores, some of them selling Wenonah canoes for the last 50 years, have felt it too.

“We are absolutely working as hard and as fast as we can,” Kueper said. “We’re using everybody we can, in any capacity, to meet this crazy, insatiable demand right now.”

Some outdoor equipment stores forced to close during COVID-19 won’t reopen.The harm to their business was too much, for too long, for them to make a comeback.

Others are cautiously optimistic. “The writing isn’t on the wall quite yet for this year. We will have to see how the rest of the summer goes, and what happens with the virus in the fall,” said Nate Scherper, vice president of Sherper’s, a fourth-generation outdoor equipment store in Milwaukee.

“You have to learn to adapt, and adapt quickly, if things don’t work out as planned,” Scherper said. “We haven’t quite dug our way out of the hole we were in after being closed for two months, but I think it’s getting better.”

Product shortages aren’t all bad, said Cris Rosario, owner of Paddleboard Specialists in Oconomowoc, Wis. Before the pandemic, he said, there was a glut of outdoor equipment on the market that put a different kind of pressure on manufacturers and retailers.

“We are so used to instant gratification. It shouldn’t always be that way,” Rosario said.

There have been other unexpected positives from COVID-19 as business owners and consumers have adapted to the changes.

Bush, with Rutabaga, says he’s glad the store is now closed on Sundays so that his employees have a day off to get outdoors and enjoy paddling sports themselves. He hasn’t had to lay off anyone during the pandemic, although for a while his staff was kept busy with things like cleaning the warehouse rather than selling boats.

“Business is just life with accounting. If you treat your staff like family, you will be fine,” he said.

Bush says he plans to continue with some of the practices he’s developed in the pandemic, such as scheduled appointments in the store and thank-you notes to customers. It’s a civil way of doing business and he likes it.

“Gratitude is a pretty powerful thing,” he says. “I have gotten calls from people saying they’d never received a hand-written thank-you note from anybody. I think that sort of thing brings us closer together.”

And he’s continuing home deliveries of boats, sometimes doing it himself, creating personal relationships in the process.

He’s staying positive, even if the business barely breaks even this year, like it did during the Great Recession of 2008.

Mon Jun 29 , 2020
Photo credit: NBC – Getty Images From Delish If you’re a fan of Diners, Drive-Ins, and Dives (and let’s be real, we all are!) you might already know that Guy Fieri has a dream job. He gets to travel the country finding the best food—much of which is fried and […] 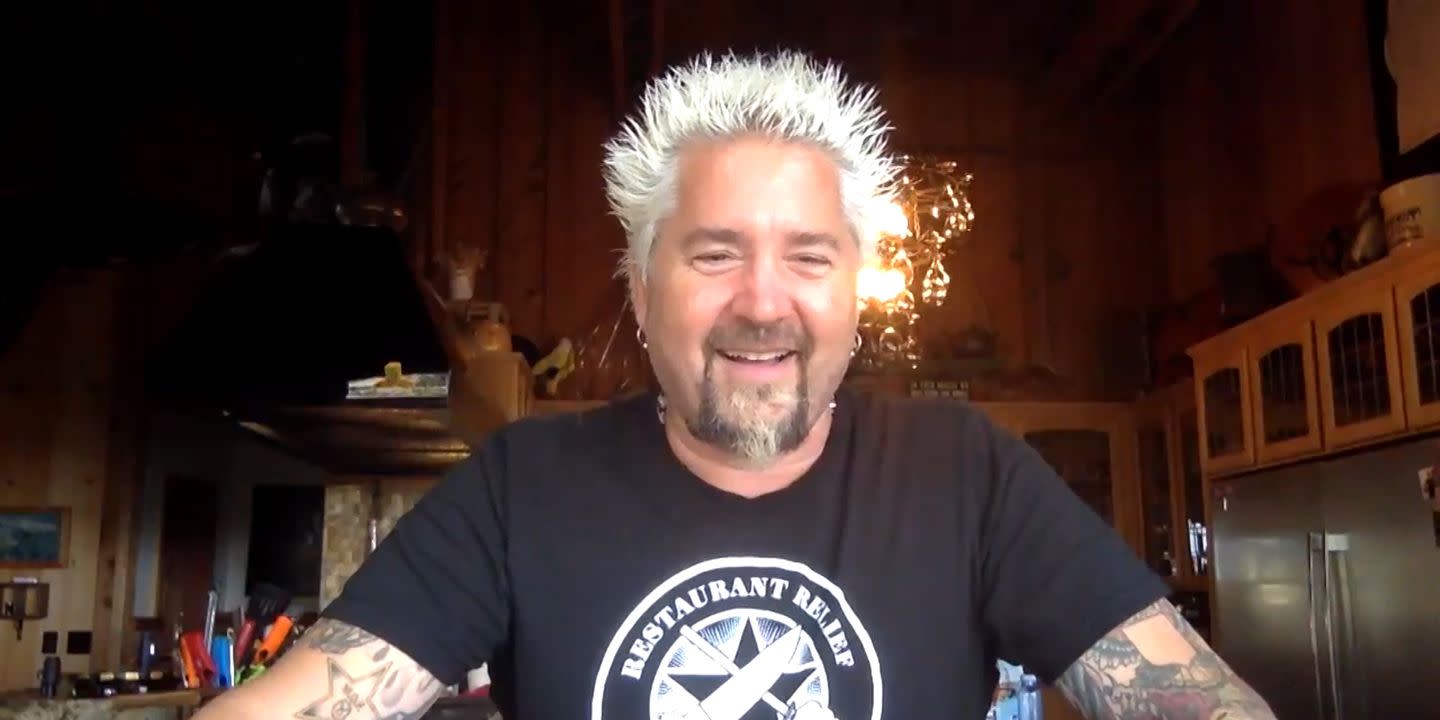