Dr Amit Patel and his vision: Amit Patel The first time Dr Amit Patel saw the girl in his home he was so astonished he fell down the stairs. “She was so vivid,” he remembers today. “I could see the detail on her dress. There was blood smeared on her […]

The first time Dr Amit Patel saw the girl in his home he was so astonished he fell down the stairs.

“She was so vivid,” he remembers today. “I could see the detail on her dress. There was blood smeared on her face.”

A month earlier, in November 2012, the former A&E medic had gone suddenly blind after catastrophic haemorrhaging in both eyes.

As he attempted to negotiate a world without sight, the girl – or rather a crystal-clear vision of one; white dress, black hair, bloodied and bruised – appeared without warning. And she has been doing so ever since.

“I can be working, walking down the street, with the kids, and she’ll suddenly be there,” the 40-year-old father-of-two says. “She once watched me change my daughter’s nappy. She’s always on trains.”

This is Charles Bonnet Syndrome – and an estimated one million partially sighted and blind people in the UK are believed to live with it.

They see – often on a near daily basis – intensely real, hyper-detailed visions. Sometimes these are benign: flowers sprouting, musical notes hanging in the air or rainbows forming.

But for many – for reasons which nobody understands – the scenes come tinged with horror. Tarantulas crawl out of books, gargoyles appear amid friends, zombies turn up in homes. In an online post, one UK sufferer, describes seeing a person crumble to dust in front of them. Dr Patel likens his visitor to the girl in The Ring. “Used to love that film,” he says today. Now, he’s less enamoured.

“Something I hear a lot is it’s like being inside a horror movie,” says Judith Potts, founder of Esme’s Umbrella, the UK’s only charity dedicated to the condition. “People know it’s not real but they can’t switch it off. There is no cure. They cannot escape.”

It is something researchers now hope to begin putting right.

A major study being carried out by neuroscientists at the University of Oxford will this summer begin investigating what might cause CBS. In doing so, they hope to, firstly, destigmatise an illness which many are believed to suffer with silently for fear their sanity may be questioned, and, secondly, lay the groundwork for finding an eventual treatment.

Crucially, while it has long been established that the syndrome is to do with the eye’s interaction with the brain – as opposed to being a form of psychosis or dementia – the research will aim to establish what exactly is happening within that process.

“It is so important,” says Potts. “This affects every part of people’s lives. If you wake up in a morning and see a tiger in your doorway that’s so real you can see the saliva on its teeth – that’s just one example of someone I spoke to recently – if you see that, it is so terrifying that, even though you know it’s not real, the anxiety puts huge stress on your life.

“Some people won’t go out as much because they don’t want to have these visions in public, or they become depressed. They have accidents. You can imagine it’s rather distracting suddenly being confronted by a Victorian family as you walk down the street.”

She herself founded Esme’s Umbrella in 2015 because her mother – the Esme in question – had suffered with the condition but found nowhere to turn: “A wonderful lucid woman who did the cryptic crossword everyday but who also happened to see gargoyles jumping around her kitchen,” notes Potts.

Charles Bonnet Syndrome itself was first identified in 1760 by the Swiss naturalist and philosopher whose grandfather – a sane and cogent man – confided in his grandson that he had started seeing birds he knew could not possibly be there.

Yet, perhaps, because the condition appears to cause no apparent physical or mental deterioration, research has been sparse and wider knowledge of it remains hugely limited.

Despite estimates that half of all visually impaired people in the UK suffer – a figure put forward by the King’s College London neuroscientist Dr Dominic Ffytche – most have never heard of it until they are diagnosed. It was only four years ago, indeed, that the Royal College of Ophthalmologists started advising its doctors they should ask patients as a matter of routine if they experienced hallucinations in a bid to better understand the syndrome.

The fact the visions are so often characterised by something vaguely dreadful is, one expert told The Independent, “beyond the current limit” of scientific understanding.

Stress, isolation and anxiety may spark the visions, some believe. But even this is open to interpretation – because the visions probably increase stress and anxiety levels.

“The first time it happened I thought I was losing my mind,” says Arthur Anston, a 71-year-old retired sales director, as he describes an unknown person suddenly appearing as he travelled in a car with his wife.

“They started very modern-looking, then their appearance went back in time – Victorian, Roman – until I had a prehistoric man looking at me,” he adds.

So scared was he that his son-in-law immediately took him to hospital. “No one ever told me when I started losing my sight this might happen,” the grandfather-of-two from Manchester says. “I’d never heard of CBS. All I knew was I was seeing something that no one else was. It was disturbing.”

It is a word commonly used by many of those diagnosed with the condition.

For Nina Chesworth, the first time she saw visions was just days after suffering the trauma of losing her sight during a home accident in 2018. Kaleidoscopic rainbows and coloured patterns suddenly appeared as she lay in hospital, eventually progressing, over the next few weeks, into unicorns.

“I’m a graphic designer by training,” the 38-year-old mother-of-one says. “So, I was a bit like, ‘Well, this is interesting’. I would observe all these colours and patterns. I found them comforting in a way. I still do sometimes.”

Then, however, came the zombies and snarling dogs.

“I was sat on the sofa at home the first time,” the mother-of-one from Manchester recalls. “I was too scared to move for hours. It’s not like you can shut your eyes and stop seeing it. It stays right there in front of you.”

Now she has got used to the strange mix of visitors she is less concerned – “sometimes I sit studying them” – but they have caused her accidents, led to plans being cancelled and can make the world feel overwhelming.

“As a blind person you rely on all your other senses but when the visions start, they can take over,” she says. “They are incapacitating, even when it’s not bad stuff you’re seeing.”

It is for this exact reason that Esme’s Unbrella and the Fight For Sight charity are now funding the new research.

Pertinently, with 4 million people in the UK set to have some form of visual impairment by 2050 – a number which would result in a possible 2 million people with CBS – experts say it is more crucial than ever to get a grip on the syndrome.

“So much more needs to be done to understand this,” says Sherine Krause, chief executive of Fight For Sight. “With a better understanding of the causes, we will be one step closer to developing a treatment and a cure.”

The study will see some 20 people – 10 with CBS and 10 without – have certain chemicals in their brains measured and monitored over a period of time.

“By looking at that, we can see if there may be an imbalance in chemistry in the visional system that may be a cause of these really weird visions,” says Holly Bridge, a professor of neuroscience leading the study. “If we can establish that, then it can become a possible lead to treatment because you could look to develop ways of changing those chemical balances. In the very long term, it may well be that you could develop an appropriate drug to keep those chemical levels in proportion.”

Early results will come within 12 months and a fully published paper within 18 – but a treatment, of course, might not arrive for years.

All the same, back with Amit in London – flanked by trusty guide dog Kika – he longs for the day when the girl from The Ring is no longer a regular visitor. He would not, it is safe to say, miss her.

“I was thinking the other day,” he says, “she’s been in my life longer than my children. It would be nice now to be rid of her.”

Why Tesla might not be the competition for this particular EV

Sun Aug 9 , 2020
Polestar, the one-time performance brand of Volvo, has now branched out on its own as a fully-fledged automaker. It took a big step forward in its mission to be a real player in the electric vehicle (EV) space, with the introduction of its latest offering, the Polestar 2. Now I […] 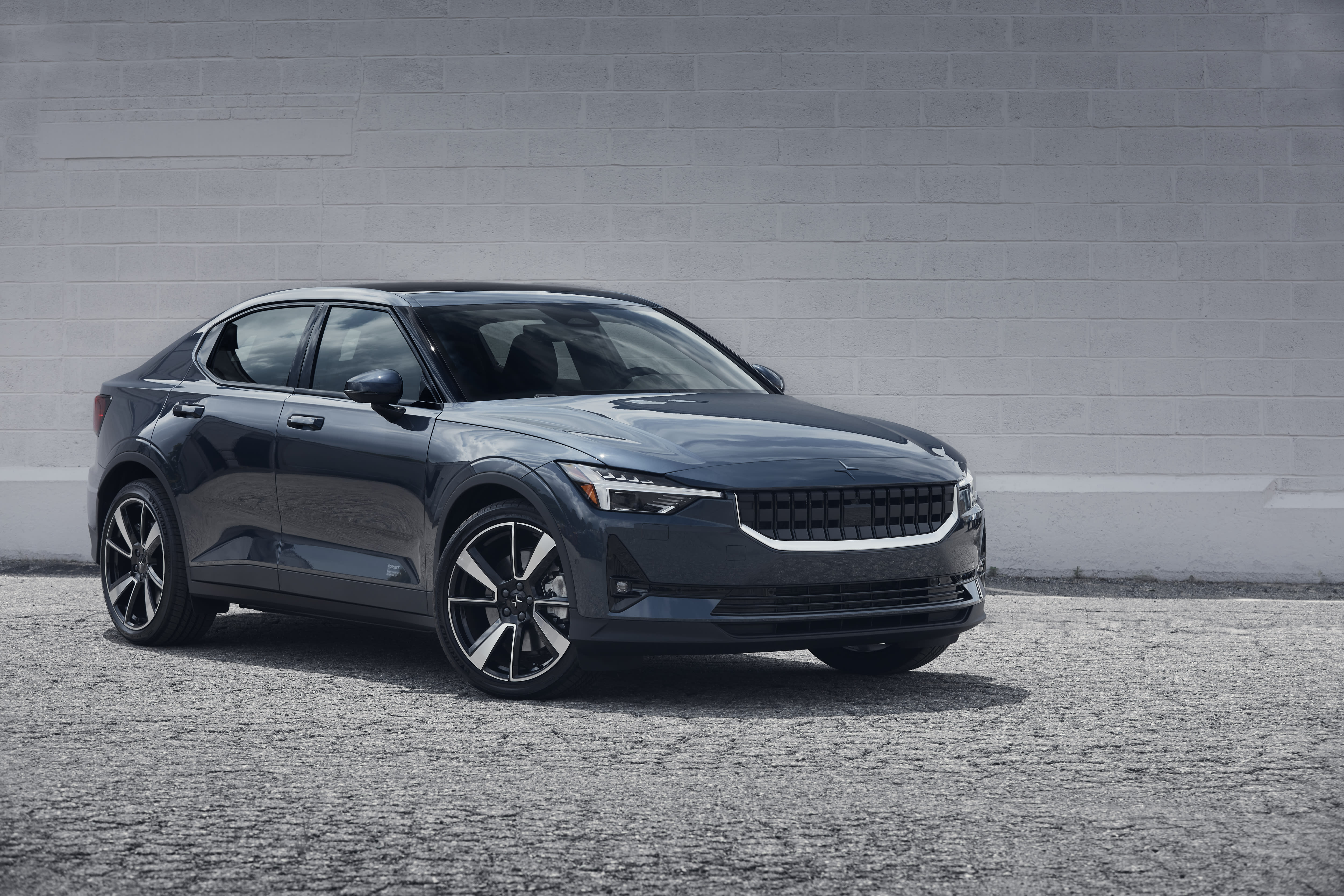