Millions of pickup lovers got their first look at the redesigned version of America’s best-selling vehicle, the F-150, when Ford revealed it online Thursday night. Changes inside and out include everything from a new body, hands-free highway driving and a hybrid model that doubles as a campsite generator to a shifter that tucks away […]

Millions of pickup lovers got their first look at the redesigned version of America’s best-selling vehicle, the F-150, when Ford revealed it online Thursday night.

Changes inside and out include everything from a new body, hands-free highway driving and a hybrid model that doubles as a campsite generator to a shifter that tucks away to turn the front seat and tailgate into workspaces for anything from emailing invoices to cutting planks.

Updated connectivity for phones and online information complete the picture.

New from the ground up, the 2021 F-150 is the first major update since Ford’s franchise vehicle adopted aluminum body panels for the 2015 model year. As with that pickup, the 2021 F-150’s body is made of aluminum. Its frame is fully boxed high-strength steel.

The F-150’s dimensions are virtually unchanged, except for a slightly wider track.

Ford promises best-in-class power and towing capability. Figures, including price, will be available closer to when sales start later this year.

Production will begin shortly at Ford’s sprawling Rouge complex in Michigan, followed by a second plant outside Kansas City, Missouri.

Hybrid model doubles as a generator

A hybrid model that goes on sale later this year will double as a generator that produces 2.4 to 7.2 kilowatts — enough to power a worksite full of tools, a deluxe campsite or your house in a blackout. The generator also can charge tools while you drive.

The hybrid uses a twin-turbo 3.5-liter, 6-cylinder, 35-kilowatt electric motor and a suitcase-sized lithium-ion battery bolted to the frame under the cab. The hybrid will be available on crew cab F-150s in all trim levels.

Ford also will offer a generator option on non-hybrid F-150s.

The F-150 goes Tesla one better with hands-free highway driving, a feature thus far offered only by Cadillac luxury vehicles. Available with an over-the-air software update to properly equipped F-150s next summer, the system will work on more than 100,000 miles of divided highways in the U.S. and Canada. (Tesla’s Autopilot requires the driver’s hands on the steering wheel for safety.)

At least initially, the system will not function while the vehicle is towing a trailer.

The F-150 will offer 11 grille styles, raised front fenders and tucked-in doors for a distinctive stance. Standard active grille shutters will boost fuel efficiency, and an active front air dam will lower at 40 mph, retracting partially at lower speeds and completely for off-roading.

C-clamp-style running lights should make the F-150 easy to recognize.

A 12-inch touch screen will be standard on models accounting for more than 50% of sales, everything above the XLT Lux. Ford says it believes the tablet-size screen’s landscape orientation will be better suited to vehicles than the upright portrait orientation the Ram pickup uses. An 8-inch touch screen will be standard on lower models. The F-150 retains easy-to-use dials — bigger to accommodate work gloves — for volume, tuning, fan and temperature.

A pair of etched-chrome U.S. flags on the side of the instrument panel will greet occupants when the door is open. The XLT model also will have a map of Detroit appliqué on its inner door panels.

A lockable storage bin under the rear seat is available. It stows to create a flat-load floor for large objects.

The tailgate incorporates a few simple, work-friendly changes. Its inner surface has a built-in ruler, pockets for pens and is lighted for paperwork. Other pockets are designed to accommodate C-clamps, while tailgate-mounted cleats can double as bottle openers.

The best bikes you can still buy online right now

Fri Jun 26 , 2020
Cycling is enjoying a boom in popularity. Ever since lockdown, getting on your bike has become one of the most convenient ways to get around the city while social distancing. But with the popularity has come a rush on stock. Finding a good, reasonably priced bike is no mean feat, […] 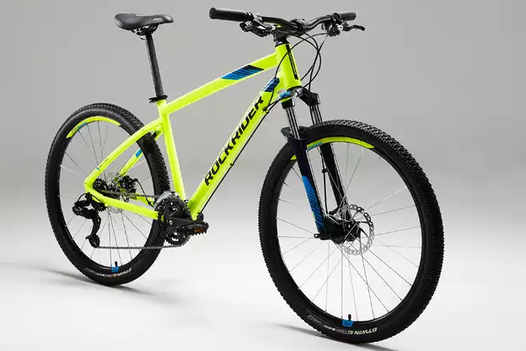