In early July, Kevin Conner hung several large Black Lives Matter flags off the back of his Ford F250 pickup truck and began cruising the main drag of Middleburg, a suburb of Jacksonville, Florida.

Conner’s one-man protest was partly triggered by the arrest of a CNN crew after the May 25 police killing of George Floyd in Minneapolis. It was also prompted by a Facebook video promising to crack down on “lawlessness.” Posted on June 30 by the sheriff’s office in Clay County, the mostly white, mostly Republican area where Conner lives, the video features Sheriff Darryl Daniels, who is Black, sporting a cowboy hat and flanked by more than a dozen deputies.

In a monologue set to a pounding drum beat, Daniels dramatically intones that he will deputize every lawful gun owner in Clay County to respond to protesters “the second” they “step out from up under the protection of the Constitution.”

The video traveled well beyond Clay County, capturing national headlines, inspiring a scathing editorial in a local newspaper, The Florida Times-Union, and generating thousands of comments, many of them supportive. Conner, 43, a former Republican and the founder of an internet marketing firm, said he viewed the video as “a threat of suppression of the First Amendment.”

But Daniels’ effort to win over a corner of the internet is only one example of how law enforcement agencies have increasingly fought a public relations battle through social media amid one of the largest protest movements in recent American history. As the country experienced a large, rapid uptick in public support for the Black Lives Matter movement, the shift in public opinion was accompanied by the mainstreaming of phrases like “abolish” and “defund” the police, and even the cancellation of the influential reality show “Cops,” long viewed as a pro-police platform that often portrayed Black suspects as violent thugs.

In response, police departments and sheriffs have turned to the same social media platforms as Black Lives Matters activists. And the police been using those platforms to directly respond to the movement — and to Floyd’s death — in new and original ways, experts said.

“They all knew George Floyd was going to affect them right here, right now, in their own backyard,” said Lauri Stevens, a former broadcast journalist who in 2005 founded Laws Communications, a company that trains law enforcement agencies to use social media. “There’s no way it couldn’t.”

In some cities, like Seattle and Portland, Oregon, where protests have been held for weeks, police departments have used Twitter like an officer with a megaphone — only their messages reach far beyond their communities. “A riot has been declared outside the Justice Center,” the Portland Police Bureau tweeted last week just after midnight. “Disperse to the north and/or west. Disperse immediately.” On Sunday, the Seattle Police Department tweeted an up-close photo of an officer’s injury that it said was sustained during protests the night before. Readers responded with photos of injuries that they said were caused by police.

Sometimes these efforts appear to spread misinformation, like when New York Police Commissioner Dermot Shea tweeted a widely shared video of an officer picking up bins filled with what looked like rocks last month. “This is what our cops are up against: Organized looters, strategically placing caches of bricks & rocks at locations throughout NYC,” he said. A local official later said it was construction debris, and an NBC News investigation that looked at similar claims in other cities found them to be false. (The NYPD did not respond to requests for comment.)

Other efforts have had dangerous consequences. In Winnipeg, Manitoba, when a woman on Facebook criticized the “excessive harm” of a widely publicized confrontation in which an officer was captured on camera repeatedly kicking a man on the ground, the police department replied to her post with a summary of the incident saying the man was armed and dangerous. “We were trying to stop a narrative based on a less than clear video,” Winnipeg Police Service spokesman Rob Carver said. But it backfired. On her Facebook page, the woman was harassed and told to take her own life, Carver said.

In an interview, she said she also started getting phone calls from people saying they knew where she lived and worked. “The threats I received were the vague kind that make a person feel they must look over their shoulder at night,” said the woman, who asked not to be named for fear of being targeted again. “I’ve never felt that way in my city.”

A different Winnipeg police spokesman initially defended the department’s actions, telling reporters that “this is a good reminder for all people to think hard and long about what they post on social media.” But in an interview Tuesday, Carver said the department never intended to shame the woman. In the future, he added, media officers would be “much more wary” of posting on a private citizen’s page.

Solidarity with the movement?

There is no need to see more video. There no need to wait to see how “it plays out”. There is no need to put a knee on someone’s neck for NINE minutes. There IS a need to DO something. If you wear a badge and you don’t have an issue with this…turn it in. pic.twitter.com/frNCAWCeq6

In some cases, officials have taken the unusual step of publicly criticizing other police officers. Two days after Floyd’s killing, a Tennessee police chief tweeted that there was “no need to see more video. There no need to wait to see how ‘it plays out.’ There is no need to put a knee on someone’s neck for NINE minutes. There IS a need to DO something. If you wear a badge and you don’t have an issue with this … turn it in.”

The tweet has been liked more than half a million times.

Others have sought to show solidarity with protesters in increasingly stylized ways. In Fayetteville, North Carolina, the police department posted a bird’s-eye view video of a line of officers in tactical gear facing protestors as though in a standoff — and then taking a knee as emotive music swells in the background. Labeled “#FayPD Kneels in Solidarity,” many of the responses were positive, with viewers saying that the video prompted tears. Others remained skeptical. “Don’t pretend that this video makes you saints,” wrote one commenter. “You want to be for justice? SHOW IT by implementing change and reform, and advocating for people’s rights.”

In Nashville, Tennessee, Sgt. Henry Particelli and the police department released an elegant, slickly produced country music video. Titled “Your Name,” Particelli sings about George Floyd’s death. “I cry for you today but I don’t know you/I wish that you were here so we could show you/there’s not a soul on earth that thinks that this is fair.” For most of the song a camera slowly swoops around Particelli, he’s sitting on a stool, strumming a guitar in jeans and a black T-shirt. In the final moments he appears in his dress blues with his head down holding a sign. As the camera pulls back, he raises his head and the sign comes into view: “Believe in change.” Back at the microphone we see him, in full uniform, with a final change of the lyrics: “I promise that we’ll honor your name.”

Christopher J. Schneider, a professor of sociology at Brandon University in Manitoba and author of “Policing and Social Media: Social Control in an Era of New Media,” said he was astonished at the sophistication of the Nashville video and at how frequently such posts are being produced. “It has to counter the speed of the videos that show them brutalizing people,” he said.

“The police no longer have a monopoly on the crime narrative,” he added. “They can’t turn our internet off. They can’t turn our phones off.” Videos like Particelli’s and other efforts at “brand management” are among the few responses authorities have in a reality upended by cellphone video, Schneider said.

Schneider said that law enforcement agencies began using social media in the mid-2000s, when the public panicked that MySpace might be used by child predators. Most later migrated to Facebook and Twitter, and some of the larger departments have developed social media strategies.

One of their aims was to “humanize the badge,” said Joe Krupa, a former police officer in Muncie, Indiana, and owner of the Police Social Media Academy, where he trains law enforcement agencies to use online platforms. “Social media has become the virtual cop shop, the virtual precinct house,” he said. “You can have a back and forth.”

Some officers and departments have thrived in this new environment. They went viral with dance videos and goofy clips showing them gobbling donuts. Tommy Norman, a white patrol officer in North Little Rock, Arkansas, which is nearly half Black, earned praise from rappers like “Killer Mike” Render and The Game for his voluminous posts on Instagram, where he has 1 million followers. “This man is out of his patrol car every single day,” Render told CNN in 2015. “He is taking pictures with other peoples’ families that are Black, with white kids in the community, but he’s in the community.”

Other efforts flopped. In 2014, when the New York Police Department asked people to tweet photos of themselves with officers using the hashtag #myNYPD, they did — only not the kind the department intended. One showed an officer yanking a woman’s hair. In another, police are seen hauling a screaming woman into a police vehicle. “If you can’t walk, don’t worry, the NYPD will carry you,” the tweet joked. “How helpful!”

Back in Clay County, Kevin Conner’s protest of Sheriff Darryl Daniels’ video led to in-person confrontations, themselves re-posted to social media. In one, a man is seen shouting expletives at him and saying that President Donald Trump will win re-election. In another, a man grins and flashes a swastika bicep tattoo. Conner ended up in a confrontation with police, too. On July 9, one of Daniels’ deputies arrested him for resisting after a sometimes-heated discussion about where Conner and other protesters could stand with their flags. By then he was out of his car, waving them on a median and on street corners.

Conner documented much of this via cellphone video, and on July 20, when the charge against him was dropped, he wrote that the “experience has peeled another layer off my eyes of what our brothers and sisters of color go through as they are arrested and mistreated every day at highly disproportionate rates by the police. I am now dedicated to this fight to reform policing and eliminate systemic racism from all facets of our country. And it starts here at home.”

Thu Jul 30 , 2020
ICYMI, Nordstrom’s Anniversary Sale is quickly approaching. Get out your calendars and save the date: It’s open to everyone August 19-30 and cardmembers can get in as early as August 4, so get those credit cards ready. In case you haven’t had the pleasure of shopping this much-anticipated yearly sale, […] 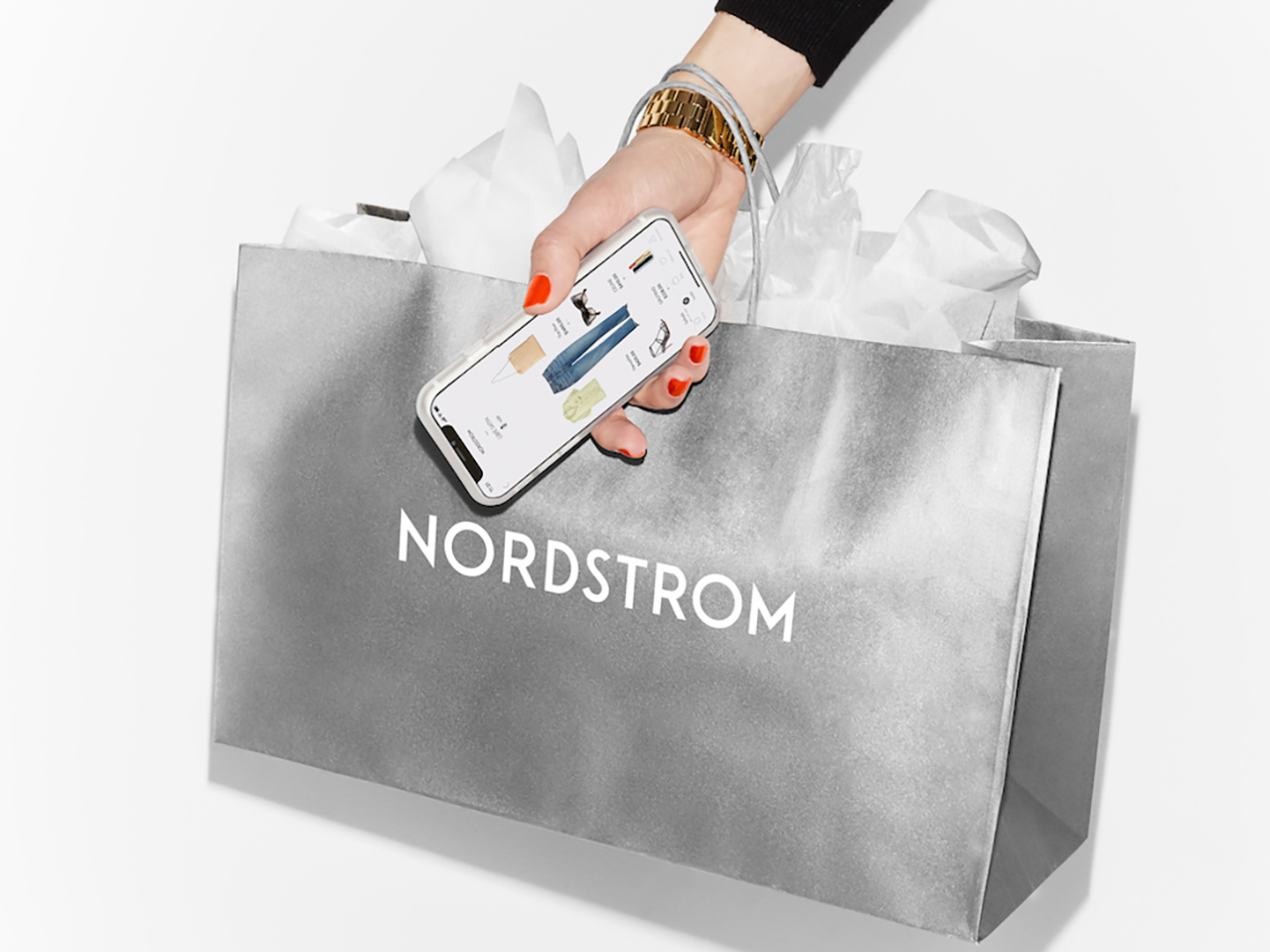