To be more specific, Paul and Julia Cox figure they called the Florida Department of Economic Opportunity 4,480 times between April 19, when Walt Disney World furloughed them, and June 7, when glitches with their state and federal unemployment benefits were finally sorted out.

The Coxes are among the lucky ones. While most people have received one-time stimulus payments from the federal government, UNITE HERE, a union representing 30,000 hospitality workers in the Orlando area, recently said that at least 1,500 of its members had yet to receive any unemployment payments from the state. Florida has been one of the slowest states to process jobless claims, in part because its system was designed to be arduous.

One housekeeper in late May sent UNITE HERE a three-word plea: “Please help me!!!!”

Few areas of the country rely on tourism more than central Florida, which is home to Disney World, SeaWorld, Universal, Gatorland, Legoland and a plethora of smaller attractions. An estimated 250,000 people work in the leisure and hospitality industries, accounting for 25% of jobs in the area, according to the trade organization Visit Orlando.

Most workers whose livelihood depends on Orlando’s ability to attract tourists in large numbers have managed to get by as the amusement economy shut down around them — though for some it has been a struggle.

Recent weeks have brought a new kind of purgatory for tourism workers in the region. Will spiking coronavirus cases in Florida halt the reopening that was beginning to happen? Disney, for instance, has been calling back employees ahead of a limited return to operations on July 11.

“To Disney’s credit, they have done everything in their power to mitigate our safety concerns about returning to work,” said Cox, who also serves as president of Disney World’s stagehand union. “People are mostly terrified that the company is going to stop the recalls. That would be a disaster. People are barely hanging on as it is, and unemployment benefits will end soon.”

Others are worried that going back to work will lead to infection. With the coronavirus now rampaging in Florida, one Disney employee started an online petition asking the company and government officials to reconsider their reopening timelines. It had close to 15,000 signatures on Friday.

Disney World employs roughly 77,000 people. A Disney spokeswoman on Friday reiterated that the resort would begin opening on July 11 and that “several thousand” employees (“cast members” in Disney parlance) had already been called back in preparation.

“Cast members are incredibly eager to return to their jobs at our theme parks,” Disney said in a statement. “The new protocols we have put into place for our phased reopening will help guide our cast and guests to enjoy the parks experience in a responsible way.”

Before the coronavirus halted travel in March, Orlando was booming. The convention center, the second largest in North America, had announced a $605 million addition; billions of dollars’ worth of new theme park attractions and hotels were on the way; and Orlando International Airport was working on a $3 billion expansion.

With local officials estimating that it could take five years for visitation to rebound from the pandemic, many of those growth projects are being scaled back or postponed. Unemployment in the Orlando metropolitan area was 22.6% in May, the highest level since Florida began its current estimating process in 1976. Universal Orlando made sweeping layoffs this past week.

An Economy on Hold

Here is what some Orlando-area workers had to say about the limbo that has decimated central Florida’s tourism industry.

“My hope is if we can get a vaccine or if we can get this under control, that people could come back. The only hope you can have.” — MICHAEL BOYLE, Electrician for Bob Carr Theatre

“Down here, everybody speaks to everybody and talk and all that. Now, nobody does that because everybody’s scared. Nobody wants to come out, nobody wants to talk to anybody. And if you go in these stores right now, people are standoffish, and Southern people are not like that.” — VERONICA “RONNIE” JACKSON, cook at Orlando Airport

“I feel excited, knowing that I will receive my salary every week and will be able to cover my needs without the anguish of wondering when they will pay me unemployment, since that system is very bad and we workers lived desperately.” — KARINA LIRA, Walt Disney World cast member

“I could read everybody’s face, the fear of not knowing what was going to happen, it was tense, it was sad, it was uncertain.” — NANCY LUNA, Convention Center employee

“Paying rent on time. Paying anything on time. Trying to decide … Just really with the funds that I have left, trying to decide if I should pay anything or not.” — SERENA JAMES, a Disney World wig stylist, with GABRIEL AUSTRIE, who works at SeaWorld’s Discovery Cove

“All the theme parks, all those people, all those restaurants. We live from the tourists. When we stop getting money, how are we going to go to support those restaurants or support those stores and the people that have small businesses? That makes me feel worried and make me feel bad about it.” — ESTEFANIA VILLADIEGO, who manages attractions at Disney’s Magic Kingdom, with her daughter, SARA CANCINO, 10

Niu Technologies Stock Is a Perfect Play on Millennial Trends

Sun Jun 28 , 2020
If you’ve followed any technology trends over the last 10 years, you know very well that electric vehicles are all the rage. Thus, it’s no surprise that the space has expanded to include two-wheeled variants. And that’s great news for Niu Technologies (NASDAQ:NIU), which specializes in electric-powered scooters. Perhaps the […] 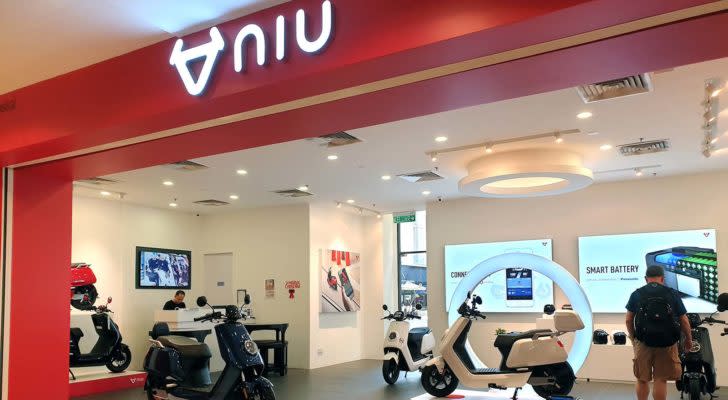