2020 Heavy Mettle Exhibit Courtesy Buffalo Chip It is true the naked face outnumbers the masked face at Sturgis 2020. But wander over to the nondescript building next to the “Rats Hole” bar, though, and there is an oasis set apart from the maskless hordes and their explosive engines. It’s […]

It is true the naked face outnumbers the masked face at Sturgis 2020. But wander over to the nondescript building next to the “Rats Hole” bar, though, and there is an oasis set apart from the maskless hordes and their explosive engines.

“This is a big year for me,” said Michael Lichter, curator and producer of the Buffalo Chip’s Motorcycles as Art exhibit. “It is the 80th anniversary of the Sturgis Motorcycle Rally, the 40th year I have been coming to the rally and the 20th year I’ve been producing motorcycle themed exhibitions during Sturgis. The builders and fellow artists chosen to display bikes in this momentous show not only have the spirit of creativity and entrepreneurship, but the moxie it takes to become noted figures in an industry rife with heavy mettle characters.”

“The builders in this year’s exhibit are the guys with enough persistence to have stuck with it through thick and thin,” said Rod Woodruff, Sturgis Buffalo Chip President. “They’ve produced some of the most amazing machines the world has ever seen. The opportunity is offered for just seven days, and then it’s gone forever.”

In order to secure an invitation to join this show, builders must have completed at least 20 custom builds and been in business for at least 20 years.

Lichter worked every night until 2 AM to prepare the exhibit – and then pulled an all-nighter to finally finish. “I walked out at 5:30 AM,” he said. He also displays some of his high-end photography at the exhibit – some of which go back more than 40 years and give newcomers a chance to see what Sturgis was like when it was a far smaller gathering.

Of the above photo, Lichter says: “I arrived in Sturgis for my first bike week too late to see the lay of the land,” he says. “But just in time for the all night party that happened every night in City Park. This then was my first morning in Sturgis. I woke up not having slept much and assessed the damages, both internally and externally. What sort of toll did the party take? There was drag racing down the narrow pavement between the tents, there were campfires, wildness until all hours of the morning and a dreamlike recollection of police cars with lights flashing, screaming through the park in the middle of the night.”

“Hair flying in the wind, leather and brass, knives and power…” he says of the above photo of Paul Cox, taken in 2003. “Looking back in time to the bandits, pirates, vikings and marauders that crossed the land before.”

Women in Egypt are learning to ride scooters and motorcycles

Sat Aug 15 , 2020
With a population of 104 million, Egypt is a conservative country where it is uncommon for women to be spotted on motorcycles. Wassef learned to ride bikes in 2008, challenging the trend in the North African country that excluded women from doing certain things like publicly riding motorcycles and bicycles. […] 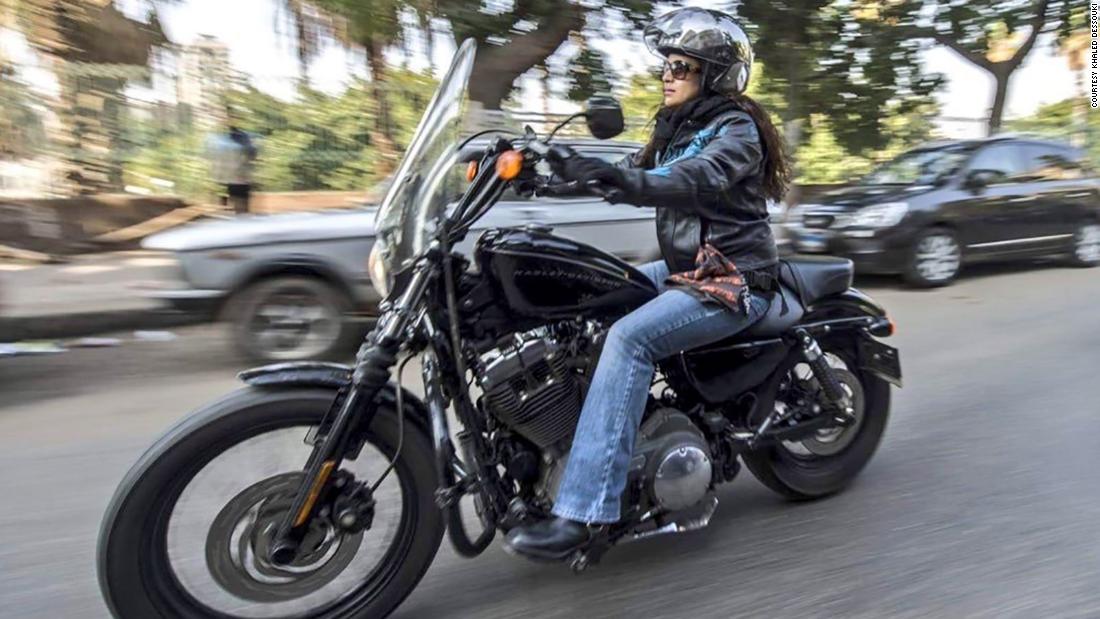