Nicki Hari took up to 20 painkillers a day at the height of her addiction. (Supplied) A mother has revealed how she overcame an addiction to painkillers that spanned a quarter of a century. Nicki Hari, 52, from Hertfordshire, was first prescribed paracetamol and ibuprofen for persistent knee pain when […]

A mother has revealed how she overcame an addiction to painkillers that spanned a quarter of a century.

Nicki Hari, 52, from Hertfordshire, was first prescribed paracetamol and ibuprofen for persistent knee pain when she was 18.

The mother-of-two later developed neuralgic pain, which she now knows to be a symptom of withdrawal, prompting her doctor to dole out the more intense analgesics codeine, co-codamol and tramadol.

Whenever Hari tried to come off the drugs she endured depression, night sweats and pain over her entire body.

Read more: Common painkillers for chronic discomfort may ‘do more harm than good’

During the height of her addiction, Hari took up to 20 painkillers a day, buying them online on top of her repeat prescription.

Having “lost all zest for life”, her friends staged an intervention and drove her to a rehabilitation centre under the pretence they were off for an evening out.

After being an inpatient for 28 days, Hari has never relapsed, but stressed she will “always be in recovery”.

Having come out the other side, Hari supports The National Institute for Health and Care Excellence’s (Nice) recent guidance not to take painkillers for chronic discomfort as they can do “more harm than good”.

‘I didn’t want to engage in anything’

Hari’s mother took the then-teenager to see a specialist after she endured persistent knee discomfort, which medics put down to “growing pain”.

Although the knee pain eased, Hari began experiencing short, severe bursts of discomfort along her nerves, which prompted doctors to prescribe stronger analgesics.

When a course of medication would come to an end, Hari would endure “really awful” symptoms.

“Depression, anxiety, night sweats, pain all over,” she said.

“I distanced myself from my family. I didn’t want to engage in anything.”

Read more: Are branded painkillers more effective than a store’s own?

Unsure what was causing her discomfort, Hari visited her GP.

“They didn’t know what it was,” she said. “I was pooh-poohed really; they sent me away.

“At the time I was in a job I hated so I put the depression down to that.”

With Hari – then in her early thirties – on a repeat prescription, it was not until she was called in for a review with a new GP that a medic suggested she may be addicted.

“The new GP said, ‘I think you’ve become dependent on these and should come off them’.

“I went into complete panic and changed surgeries so that wouldn’t happen. I manipulated the system a bit.”

‘I couldn’t pull myself together’

“When my body built up a tolerance I started buying more over the counter,” she said.

“I found ways of topping up my own medication.

“In the last 10 years of my using, I was Googling the painkillers and it flashed up ‘buy your codeine here’.”

At the height of her addiction, Hari would take two analgesics whenever the tell-tale withdrawal symptoms kicked in.

Read more: Swiss balls could ward off back pain if working from home

“At my absolute worst I was probably popping 15 to 20 times a day,” she said. “I had them in the car, different rooms in the house, at work.”

Hari claims she managed to look after her children throughout the ordeal, but the addiction took its toll on her mental health.

“[My children] went to school and were washed and dressed and fed,” she said.

“But I was too wiped out to make dinner so my husband at the time would have to, or come home early because I couldn’t pull myself together.

‘You take it one day at a time’

In the summer of 2011, Hari’s loved ones intervened when she slept through her children’s sports day.

“Two of my friends climbed on the wheelie ban and were banging on my window, and said ‘you’ve got a problem’,” she said.

“I said: ‘there is no problem because I’m taking what the doctor told me’.”

That October, a group of friends arrived at her house saying they were going out for the evening.

“We all bundled into the car, but I didn’t realise they were driving me to rehab to see a psychiatrist,” said Hari.

“[When we arrived] my parents and then husband were there. I hated them at the time.”

Read more: How to avoid ‘tech neck’ while working from home

Hari spent the next 28 days as an inpatient.

“I was in there with people with ‘real addictions’ – crack, heroin, alcohol – and I didn’t see myself as one of them.

“I was a bit grandiose, thinking I was better than these people. [Thinking] ‘I have a nice job, house, car’. I wasn’t in an alleyway jacking up.”

Despite her reservations, Hari completed the rehabilitation stint and has never looked back.

“You’re never cured, you’re always in recovery,” she said. “You take it one day at a time.”

In 2019, Hari developed gallstones, describing the pain as “horrendous”.

“I was very mindful of what I was taking,” she said. “I knew I could get addicted again but I know where that would take me.”

Painkillers ‘do more harm than good’

Her experience with painkiller addiction has led Hari to support Nice’s recent guidance not to take painkillers for chronic discomfort.

The official health watchdog has warned painkillers can do “more harm than good” due to their addiction risk, and instead encourages patients be prescribed exercise, physical therapy or acupuncture.

Speaking of the somewhat controversial suggestion of acupuncture – which has mixed evidence supporting its effectiveness – Hari said: “Alternative medicine should be available but without a six month waiting list because that pushes people to the internet.”

Hari – who now works for the UK Addiction Treatment Group – is not against painkillers, providing they are prescribed appropriately.

“If someone comes in with acute pain, if they need strong painkillers, that person needs to be aware of the dangers and it should be managed.

“Maybe just give three to seven days’ [worth] at a time.”

Chronic pain, whether a recurrent headache or back discomfort, affected between 13% and 50% of Britons in 2019.

The NHS recommends a combination of exercise, physical therapy and painkillers to ease the debilitating symptom.

In more severe cases, amitriptyline or gabapentin may be prescribed for pain caused by nerve sensitivity or damage, like shingles or sciatica.

The strongest painkillers available are morphine or similar-acting drugs, like opioids.

Wed Aug 5 , 2020
A prototype of SpaceX’s next-generation Starship vehicle has successfully flown to an altitude of 150m (500ft). The uncrewed test vehicle rose up on a plume of exhaust before deploying its landing legs and touching down softly. The flight was carried out at SpaceX’s test site near the village of Boca […] 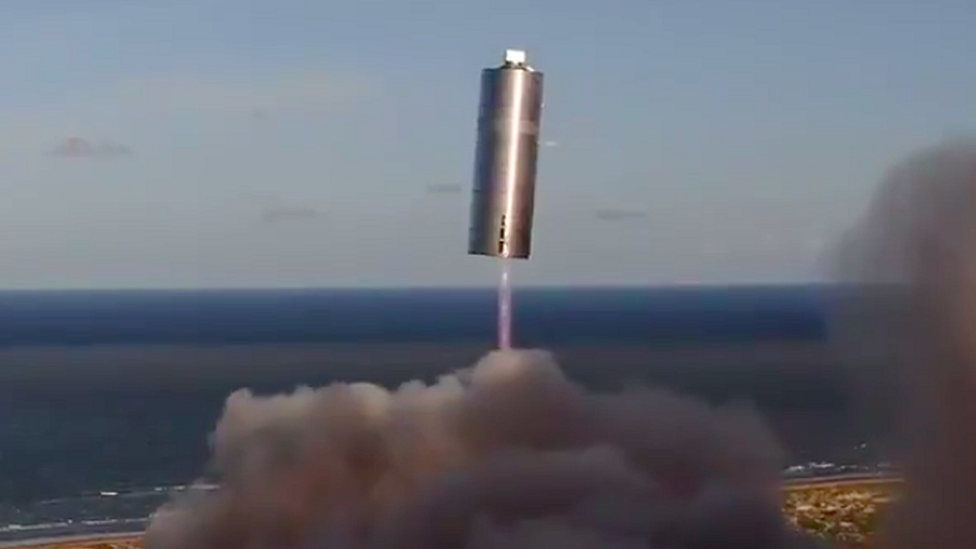