Democrats and many others are determined to defeat a toxic president and win governing power to beat back the pandemic, root out institutional racism, and build a robust, equitable economic recovery. Four months out, this all looks possible. Most Americans have never liked Donald Trump or the Republican agenda, and even […]

Democrats and many others are determined to defeat a toxic president and win governing power to beat back the pandemic, root out institutional racism, and build a robust, equitable economic recovery. Four months out, this all looks possible. Most Americans have never liked Donald Trump or the Republican agenda, and even fewer approve after their bungling efforts to limit damage from the pandemic. But mid-summer polls are not votes.

Nothing matters more right now for presumptive Democratic nominee Joe Biden’s campaign and its party and civic allies than taking specific steps to make sure that disillusioned Americans can actually vote this fall. Unfortunately, there are worrying signs of premature triumphalism. Too many liberals and progressives are debating policy details or diverting into battles about statues and implausible slogans. Even those concerned with ballot access are investing too much in lawsuits, long after conservative Supreme Court Justices (ruling from home) have signaled they will not ensure safe voting for all Americans.

The Trump campaign and the GOP know their chances in November depend on mobilizing and protecting their own voters while obstructing Democratic constituencies. They are deploying tens of thousands of volunteers to do voter contact and guidance through local networks, while supporting legal challenges against mail ballots and urban polling place access. Right-wingers in the Honest Elections Project are ramping up to challenge minority voters at the polls and plant stories about mail-balloting “fraud.”

Most basically, many Americans who tell pollsters they support Biden are not registered to vote. New voter registrations dropped by 70% in 11 states in April 2020 compared with April 2016, according to the Center for Election Innovation and Research. The coronavirus crisis undercut usual registration efforts — at motor vehicle offices, political rallies, religious services, and via community drives by the League of Women Voters and other civic groups.

In Florida, for instance, new registrations at motor vehicle offices fell from over 42,000 in February to less than 4,900 in April. Recently, new registrations have ticked upward, but lost ground cannot be regained unless local party and civic groups make phone calls and help people deal with local rules for online registration, requesting mail-in ballots, or obtaining voter IDs. High-tech solutions are not the answer here; neighborly contacts will work much better.

Much attention has focused on expanding mail-in voting options, without enough attention to risks and alternatives. Fewer than 10% of registered voters in 29 states and Washington, D.C., received mail ballots in 2018, but demand is exploding in 2020. Changes that normally would take years for administrators to fine-tune are being rolled out in literally a few months. GOP officials have too many opportunities to slow-walk applications or fail to count returned ballots. And snafus can happen even when officials intend well. During the primaries in Democratic strongholds that Biden is counting on, about 20,000 ballots were returned as undeliverable in Baltimore and nearly 2,000 suburban Philadelphia voters received the wrong ballots.

Undercutting trust: Trump and Barr are making false claims about mail-in ballots to scare us out of voting

Physical polling places need to be plentiful, safe, and well run this fall. Many older African Americans prefer to drop off ballots in person, and young people frequently procrastinate.

During the primaries, cities like Milwaukee, Atlanta, and Houston had only a few voting locations or experienced equipment breakdowns, because the usual elderly poll workers are threatened by COVID-19 and cannot serve. Right now is the time to recruit and train squads of youthful poll workers to learn rules and technologies — along the lines of the North Carolina State Board of Elections’ “democracy heroes” project. Although Democratic Party poll monitors and lawyers must stand ready to parry obstructions and make sure ballots are properly counted, non-partisan poll workers deserve everyone’s support as well.

During U.S. presidential contests, media outlets and most advocacy groups focus on candidate personalities and policy promises, and advocacy groups mount high tech operations and file lawsuits. But in every election — and all the more in 2020 — delivering actual votes depends on massive ground-level organizational efforts.

Local Democratic Party committees and many of the grassroots anti-Trump citizen groups that sprang to life after November 2016 have been calling neighbors to see how they are doing in the pandemic — and now they are following up to walk people through registration and voting procedures. Such efforts need to be widespread, and are likely to outperform high-tech internet applications (like the one that failed in the Iowa Democratic primary) and deliver more real people to the polls than vast stranger-to-stranger texting campaigns or million-dollar lawsuits.

Will Democrats and others horrified by the Trump GOP meet the practical challenge in this epically crucial year? The answer can be yes, but only if they stick to basics. Up and down the ballot, November outcomes will be won or lost in trench electoral warfare — by struggles over who registers and votes, either by obtaining and returning a mail ballot that is actually counted, or by arriving at a functioning polling place.

America’s near-term democratic future is not going to be determined by candidate gaffes, detailed policy plans or the number of statues removed. Democrats need to keep a basic truth in mind: It’s all about the ballots.

Theda Skocpol is the Victor S. Thomas Professor of Government and Sociology at Harvard. Lawrence Jacobs (@larryrjacobs)  is the Walter F. and Joan Mondale Chair for Political Studies and Director of the Center for the Study of Politics and Governance in the Hubert H. Humphrey Institute and Department of Political Science at the University of Minnesota. Both serve on the Scholars Strategy Network’s Steering Committee.

You can read diverse opinions from our Board of Contributors and other writers on the Opinion front page, on Twitter @usatodayopinion and in our daily Opinion newsletter. To respond to a column, submit a comment to [email protected]

This article originally appeared on USA TODAY: 2020 election: Job one for Democrats is overcoming obstacles to voting

Sun Jul 12 , 2020
Forty-four years after they honeymooned at the Magic Kingdom, Carol and Steve Show donned mouse ears with “44” emblazoned on the iconic headgear and posed for photos in front of Cinderella Castle. The two were among the estimated 16,000 people who descended on Walt Disney World Saturday as the Magic Kingdom and Animal Kingdom […] 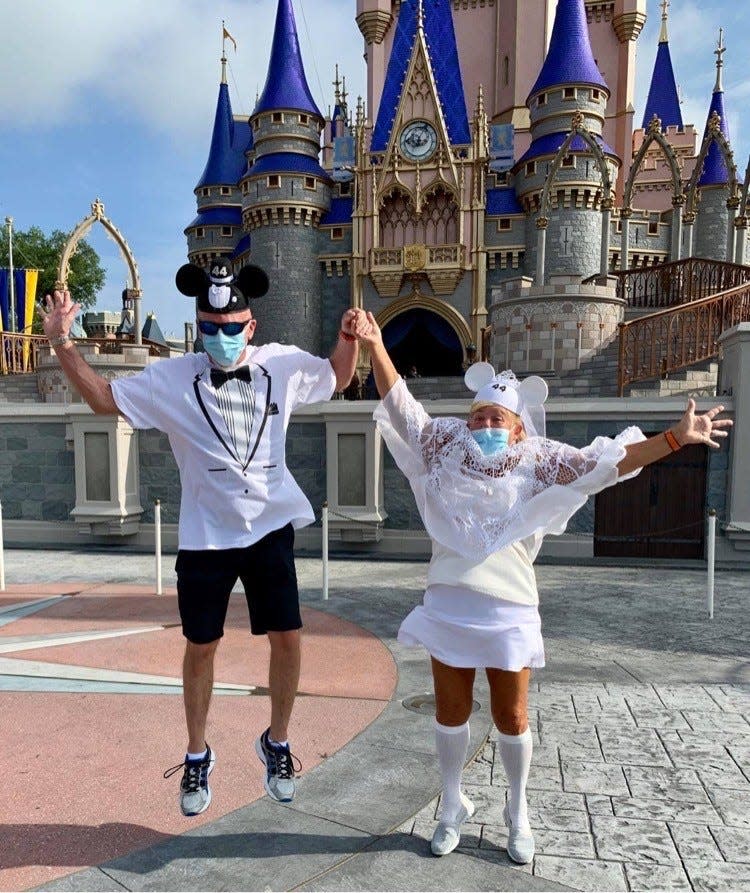