For Jason Brown, the last figure skating season began and ended with some unexpected challenges. On Aug. 22, 2019, the day he arrived for U.S. Figure Skating’s pre-season Champs Camp in Irvine, Calif., Brown was a backseat passenger in a vehicle involved in an accident. He sustained a concussion that […]

For Jason Brown, the last figure skating season began and ended with some unexpected challenges.

On Aug. 22, 2019, the day he arrived for U.S. Figure Skating’s pre-season Champs Camp in Irvine, Calif., Brown was a backseat passenger in a vehicle involved in an accident. He sustained a concussion that compromised his training for several weeks and forced him to withdraw from what was to have been his season debut competition.

On March 16, 2020, the day Brown was to fly from his training base in Toronto to the World Championships in Montreal, he went the other direction, driving home to his family’s home in the Chicago suburbs because the world meet had been cancelled five days earlier over Covid-19 health concerns. His most successful competitive season, with silver medals at nationals, the Four Continents Championships and Skate America, left him feeling both fulfilled and unfinished.

Now Brown, 25, is back in Toronto (finally getting there June 23 brought another unexpected challenge). He is undergoing a Canadian government-mandated 14-day self-quarantine before a planned July 8 return to the ice at the Cricket Club to prepare for a season that may not take place.

None of the other foreign stars who train at the Cricket Club, including 2-time reigning Olympic champion Yuzuru Hanyu of Japan and reigning Olympic silver medalist Yevgenia Medvedeva of Russia, is expected back before the end of July, according to his Brown’s primary coach, Tracy Wilson. (Brown also works with Brian Orser, primary coach to Hanyu and Medvedeva.)

We caught up with Brown, the 2014 Olympic team event bronze medalist, by phone at the end of last week for a wide-ranging conversation:

You had an unexpectedly extended family reunion, with your older sister, Jordan, 27, (and her boyfriend), younger brother, Dylan, 22, and your parents, Marla and Steven, all together longer than a week for the first time in nine years. What was that like?

Brown: It was really awesome, even if the circumstances that led to it obviously weren’t ideal. I got to know my siblings on an entirely different level, as adults. We didn’t miss a single family dinner in three months.

Who cooked for that crowd every night?

Brown: I did! Jordan (in her first year as Major League Sports Dietician for the Chicago Cubs) had a million Zoom meetings, and Dylan was finishing his undergraduate degree at the University of Illinois and studying for the CPA exam. My dad was still working, and my mom never has liked to cook.

What were your go-to dishes?

Brown: We all eat everything, thank goodness, and we all like Asian cooking. The favorites were a shrimp stir-fry with quinoa and a shrimp salad with cold noodles.

When did you learn to cook?

Brown: Over the past two seasons living in Toronto. But doing it for six instead of one is like anything when you get into a position where it’s sink or swim. I was in charge, and sometimes my sister would ask me to try things she was thinking of recommending to the players. And I used some of my unexpected free time to take some online cooking classes.

What other things did you try with the extra time?

Brown: I never had consistently done dance classes, and I took three (virtual) dance classes a week, working on different choreography and styles: hip-hop, contemporary, modern, Latin. I could feel progress in finding my own way of moving.

You are a relentlessly optimistic person. Was there any time when the uncertainty really got you down?

Brown: The only time was when my (paternal) grandmother died on Mother’s Day. She was 89, and it wasn’t related to Covid, but it was hard on our family not to see her at the end, even if it brought us all together even more.

Did you ever hit a low about when and whether skating was going to be able to come out of this?

Brown: As you said, I’m a very optimistic person. As of now, my goal – and I have always said this since moving to Canada – is the 2022 Winter Olympics. I want this season badly, but my focus is on 2022. I’m trying not to look at what this could possibly mean for the future, but if it snowballs toward 2022, I think we will have a different conversation.

Then it would probably be like what a lot of the 2020 (Summer) Olympians and hopefuls are feeling right now. I can’t let myself get down about it, and I can’t imagine what they are going through. I look at how they are adapting and moving forward. My eyes are set on the ’22 Olympic Games, and we’re not in a place where I’m thinking about those being cancelled.

It seems clear from what you just said the that the possibility of no 2021 season has crossed your mind, and you’re taking a mindset of, “I can deal with that.”

How will it affect you personally and the sport in general if there is no 2020-21 season at all or no international events?

Brown: I know how important the pre-Olympic season is for development and experience. It’s a huge opportunity to learn and grow, to try new things and take on risks before the pressure of the Olympic year. And it’s important just to have the chance to compete against some of the people you will be going against for Olympic team sports.

But I’m looking at the positive. As of now, rinks are open, and we can train. We have the time to fine tune some things we don’t have time to focus on when we are getting ready for competitions.

How will you handle it if you can keep training but they cancel the Grand Prix Series and then maybe nationals and worlds?

Brown: That’s a great question. It is something I would have to re-discuss with my coaches. If we can keep training and the season is cancelled, that’s one thing: we’ll start right then working on programs for the Olympic year. If there is a season, depending what it looks like, we will be strategizing to maximize the competitive opportunities we get.

Have you thought about what programs you might use if there are events this season, given the lost preparation time? Last year’s? New ones?

Brown: As of now, my coaches want me to keep expanding and work on new programs. Two weeks before the first time I went to cross the border, I was able to work on short programs with choreographer Rohene Ward at the Fox Valley Ice Arena (in Chicago’s west suburbs). We did a couple programs with very different styles – one easier and one more challenging that will take more time to find its rhythm. If I get to compete just once or twice or on short notice, the harder one might not work. (He chose not to provide any details until Orser and Tracy Wilson have seen the programs.)

As far as a free skate, (choreographer) David Wilson and I are still in the thinking stage. We’re waiting for more information about plans for this season.

Wait. You said, “the first time I went to cross the border…”

Brown: (He laughs.) I first tried to do it June 14 at Sault Ste. Marie, Michigan. (Canada’s current border crossing rules for U.S. citizens require an “essential” reason for entry, which can be a job.) I had some letters, including one from my billet family saying they would shop for me during my quarantine, but the day I arrived, the supervisor I needed to see was not working. They told me to get a hotel in Michigan and return the next day, when they deemed me non-essential. I drove back home, collected letters from U.S. Figure Skating, Skate Canada and Skate Ontario and decided to try June 23 at Buffalo, because (U.S. ice dancers) Kaitlin Hawayek and Jean-Luc Baker (who train in Montreal) had successfully gone that way the day before. And I was approved. I totally respect how hard it was to get in.

So you are, in effect, so close and yet seemingly so far from competing again. Can you see a season taking place?

Brown: I think it’s really hard to see that, even trying to be as optimistic as possible. At the end of the day, it’s about safety, about the well-being of the athletes, the coaches, the officials, the judges. You want to make sure everyone feels comfortable, and that it’s in their best interests, health-wise. As much as I want to compete and get out there in front of the fans, I want to do it in a safe manner. There’s no reason to cut corners right now.

What kind of shape are you in now?

Brown: Decent shape, but I would need at least a month of training before I felt I could run a full-out free program, start to finish, without collapsing.

At the end of last season, after several up-and-down or simply disappointing seasons, your performances were a more mature version of the Jason Brown from 2014 and 2015, the skater who had made the 2014 Olympic team with an incandescent free skate, won the 2015 U.S. title and had his best finish (fourth) at Worlds. Where does that put you now?

Brown: It was an incredible end of the year or, as I look at, of the bloc of time I have been in Canada (since June 2018). Brian and Tracy always talk about this 18-month period, the time needed to adapt to new technique and be comfortable with the coaches. It really was a struggle, even in my second season with them. It finally came together after those 18 months.

The way those last two events (nationals and Four Continents) went was a proud moment for me and my coaches. At nationals, I cried in a kiss-and-cry for the first time ever, because it had been such an emotional journey. Then my going to Four Continents a week later and backing it up, so it wasn’t, “Oh, nationals was a one-time fluke.” The technique is in me now.

The one thing that nags me was popping the quad attempt (at Four Continents). But I had the mentality of “I’ll get it at worlds.” Not having the chance is my only regret.

Philip Hersh, who has covered figure skating at the last 11 Winter Olympics, is a special contributor to NBCSports.com/figure-skating.

OlympicTalk is on Apple News. Favorite us!

Thu Jul 2 , 2020
See Full Image Gallery >> BMW just announced a couple different tech initiatives. One is a software update for iDrive 7.0 that will be sent out wirelessly to BMWs equipped with that infotainment software. The second is an expansion of its ConnectedDrive Store, and it’s this second announcement that will […] 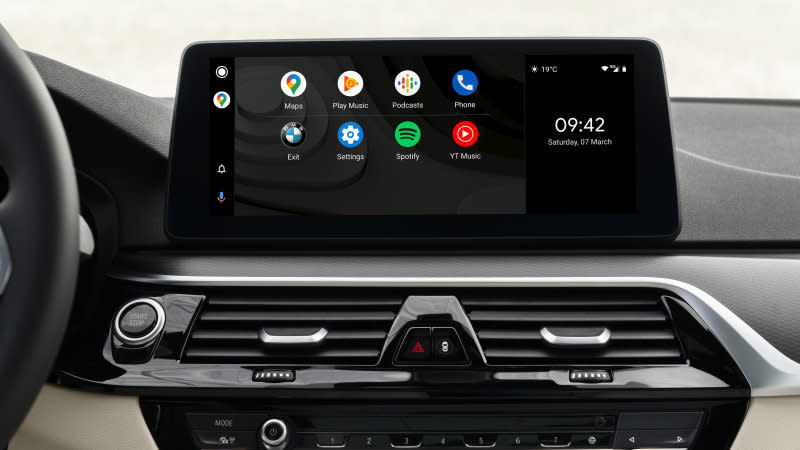