Summer is road trip season, which often means it’s also car maintenance season. If you’ve just driven halfway across the country and back, you’ll want to change the engine oil and rotate your tires. Don’t fret if you don’t have access to a lift — jacking up a car is […]

Summer is road trip season, which often means it’s also car maintenance season. If you’ve just driven halfway across the country and back, you’ll want to change the engine oil and rotate your tires. Don’t fret if you don’t have access to a lift — jacking up a car is easy, quick, and 100% safe if you take basic precautions. Here’s what you need to know.

The only tool you need is a jack. Nearly every car comes with one, it’s usually in the trunk, but there are aftermarket options which are sturdier and easier to use. We recommend using the factory jack if you’re simply changing a flat tire, but it’s wise to invest in a hydraulic unit if you need to crawl under your car on a regular basis.

Alternatively, you can use a set of floor ramps if the wheels don’t need to come off. Floor jacks and ramps are relatively affordable and available at every auto parts store or online. For example, a set of RhinoRamps costs less than $50, while a traditional floor jack rated at 3 tons (6,000 pounds) can be bought for around $100. Jack stands are useful, too, but be careful if yours come from Harbor Freight. In May 2020, the company recalled 1.7 million jack stands that can suddenly collapse due to a defect. It then recalled the replacement stands it gave its customers.

There are other, optional tools that can make your life easier:

What to understand before jacking your car up

First, ask yourself which part of your car needs to go up in the air. For instance, if you need to change your oil, you should be raising the end of the car that houses the engine. For most cars, it’s at the front, but in some, it’s in the middle or at the rear. If you just need to change a tire, it’s the corner that’s flat that needs to get off the ground.

Additionally, keep in mind there are four wheels, so four points where the vehicle’s total weight is distributed. If your car weighs 4,000 pounds, you’ve got approximately 1,000 pounds weighing down each wheel, though the its layout and its weight distribution could alter this equation. Floor jacks and stands vary in weight capacity, so read the fine print carefully before you buy to ensure what you take home is sturdy enough for the job.

Always raise your car on level ground. If you don’t, it could roll or slip off the jack. It’s also best to park it on a hard surface, like tarmac, instead of on grass or on a dirt road.

Step 2: Secure your car in place

Straighten the steering wheel, put the car in park (or in first gear if you have a manual transmission; never in neutral), and firmly engage the parking brake. This keeps it from moving unexpectedly when you’re under it.

On every car, there are specific spots where a jack plate is welded to the body. This is where the jack needs to go, because not every spot under a car is load-bearing. You can find this information in your owner’s manual, or online. Jack points are normally behind the front wheels and in front of the rear wheels; the diagram below is an example.

Step 4: Position the floor jack under the appropriate spot

In our case, it was in the middle of the crossmember. Place the optional pieces of wood on the jack plate to wedge in between the car’s jack point and the jack itself. This minimizes the risk of damaging the vehicle.

Step 5: Slowly raise the jack until it meets the car

If you’re using a traditional floor jack, make sure the release valve is closed, which is typically done by rotating the main lever clockwise. Then, start raising the jack until it’s in contact with the part of the car going up in the air and check that nothing has moved before you go further. Keep an eye on how it comes in contact with the body.

Watch how the car moves as you jack it up and stop immediately if it’s tilting to one side. If everything checks out, raise it high enough so that you have enough space to work. You don’t want your rib cage rubbing against the oil pan, but you also don’t need it eight and a half feet off the ground to change a fuel filter.

Once it’s at the desired height, give the car a quick nudge with your hip to make sure it’s stable.

Unless you’re simply changing a wheel, the jack should be used to raise your car, not hold it up in place while it’s in the air. Place jack stands at the appropriate locations and carefully lower the jack until the car is resting on them.

Step 9: Lower your car back down

If you put your car on jack stands, remember to remove them before you lower the vehicle. If you took a wheel off, make sure you put it back on with the lug nuts hand-tightened (fully tighten them with a wrench once the wheels are back on the ground). Then perform steps five and six in reverse — remember, counterclockwise to open the release valve on a traditional jack, and crank counterclockwise on scissor jacks. Do this slowly!

Eventually, the car will rest back on its wheels and you can remove the floor jack completely. Now, you’re ready to get back on the road.

Griffith Park finally gets the book it deserves. Take a hike with its author

Fri Aug 14 , 2020
Casey Schreiner, author of the bestselling “Discovering Griffith Park,” on one of his favorite trails. (Dania Maxwell/Los Angeles Times) Cresting an overlook on the Condor Trail in Griffith Park, Casey Schreiner wants us to stop to listen to the chimpanzees. “They’re a little bit chattier now than they were when […] 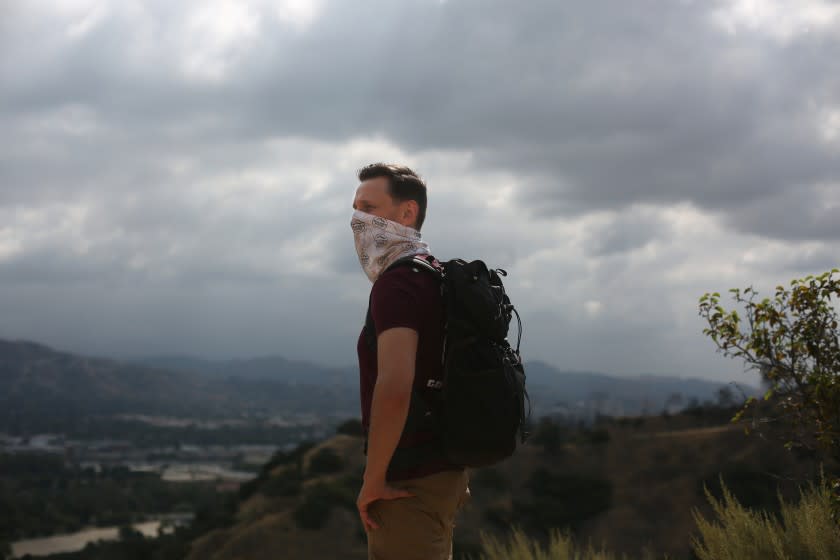