LAPD Officer Toni McBride has faced scrutiny after she fatally shot a man April 22. The discussion partly involves her status as a gun-toting model and her father’s position with the Police Protective League. (Dillon Precision Products) Ten years ago, after a controversial case in which an LAPD officer shot […]

Ten years ago, after a controversial case in which an LAPD officer shot and killed a man armed with a knife, the department offered me a chance to virtually experience what it’s like to make a split-second decision about when to shoot.

I got a crash course on LAPD’s deadly-force policy and then was sent into a video simulator room, where I was handed a service belt with a Glock semiautomatic. Then they started a video in which a series of actors played threatening suspects, and I had to figure out whether or not to shoot.

It wasn’t easy. Deciding when a suspect might be a threat to an officer or other people can be complicated. And I was in a video game, not the real world, where the pressure has to be intense.

In one scene, a suspect in a domestic dispute shot and killed me before I reached for my weapon. In another, I shot and killed a man charging at me with a knife, but my trainer said I waited too long and could have been injured or killed by the suspect.

That last scene came to mind last week when I read a story by my colleagues Jim Rainey and Andrew J. Campa about an LAPD officer who shot and killed a man with a razor-edged box cutter on April 22, just south of downtown L.A. The story quoted use-of-force expert Ed Obayashi, who defended the fatal shooting of 38-year-old carpet installer Daniel Hernandez by 23-year-old officer Toni McBride.

Obayashi called it “a clear-cut justified shooting” and said, “There is absolutely no doubt in my mind this officer was facing an immediate threat to her life.”

I’m no expert just because I had a few minutes of video simulation training, but I see things a little differently. Before I explain what I mean, I should note that the story by Rainey and Campa offered up some interesting history about Officer McBride:

“A slew of online videos show the…officer blasting away at targets, with prize-winning speed and accuracy, on a gun range in the Simi Valley foothills,” said the story. “She cavorted and strutted, sometimes within view of Hollywood glitterati, who used the same firing range to hone the gunplay they would use for movies and TV.”

McBride is the daughter of Jamie McBride, the face and mouth of the Police Protective League and an occasional actor who plays tough cops and street thugs. When the May 25 killing of George Floyd by Minneapolis police led to nationwide demonstrations, Jamie McBride’s response was to put up a Facebook post with a video of former LAPD Chief Daryl Gates, who led the department during some of its most brutal, alienating years. “The CHIEF! Never sell out and back the troops!” McBride wrote.

The sins of the father shouldn’t be blamed on his offspring, and maybe Toni McBride has very different attitudes from her father. But, fairly or not, her status as a gun-toting model and shooting gallery doyenne has brought additional scrutiny to the shooting on April 22, and two lawsuits alleging wrongful death and civil rights violations have been filed against McBride and the city by relatives of Hernandez.

McBride’s attorney told The Times the officer admirably handled a fast-moving incident, but an attorney for the dead man’s family countered, “Do we want police officers to be gunslingers, or to live up to the LAPD motto, ‘To protect and to serve.’”

According to the LAPD account — which includes video from officer body cams and civilian witnesses — McBride and a partner were responding to a call when they came upon an unrelated multivehicle accident. They were told that the driver of a truck was still in the vehicle and was trying to harm himself with a knife.

McBride capably tried to manage the chaotic scene, ordering civilians to move out of the way. She called for backup and asked her partner if they had less-lethal weapons, but no response can be heard on the video. Hernandez exited his vehicle and walked slowly in McBride’s direction, ignoring her calls for him to “show your hands,” “stay right there” and “drop the knife.”

“Drop it,” she said as Hernandez took another step toward her, and she fired twice. Hernandez fell to his knees, bounced back up, and McBride shot him two more times, knocking him down. She then fired twice more. Hernandez, motionless, was handcuffed by another officer. An autopsy found methamphetamine in his system.

By ignoring commands and advancing toward a police officer, Hernandez certainly put himself at risk, and McBride had to quickly decide how to respond.

“She had fear at all times and was shooting at somebody she felt was coming at her and … toward the other citizens who were out there,” said McBride’s attorney.

But when she first fired, Hernandez appeared to be roughly 20 feet or more away from her. If he had a gun, the shooting might be easier to justify, said a career law enforcement official who asked not to be identified.

A box cutter can certainly be a lethal weapon, but from a distance, it couldn’t do much harm. So should McBride have tried harder to de-escalate the situation, possibly by taking cover behind her vehicle?

Sure, she was at risk, but that’s part of the job, and couldn’t multiple officers have subdued a single suspect who didn’t have a gun with force, batons, Tasers, something less lethal? And once Hernandez was down, were the last two shots necessary, particularly given the bystanders who could have been hit if McBride missed?

The law enforcement official I spoke to predicted the LAPD investigation into the matter might find that the shooting was technically within deadly force policy, but that the tactics McBride used could be found in fault.

I contacted a deadly-force expert named Chet Epperson, a retired cop and police chief who served in Illinois and is now a police policy consultant and president of Americans for Effective Law Enforcement. He watched the video and emphasized that he does not know what additional evidence exists.

But based on what he saw, Epperson said it’s fair to ask why additional de-escalation was not attempted, why McBride did not know whether less-lethal weapons were available, why she didn’t take cover behind her vehicle to buy time and why she fired the last rounds after the suspect was down, the threat was diminished, and bystanders were still in danger of being hit.

“Without doing any measurements, there does appear to me to be some distance between the shooting officer and the suspect that has the weapon,” said Epperson.

“He wasn’t up on his hands,” he added about the rounds fired after Hernandez was down. “He wasn’t running at the officer. He didn’t pull a gun out. He wasn’t throwing knives. I would highly question the additional discharge of firearms against a suspect when he’s down, obviously down, not in a fighting stance but in a wounded position.”

It could take up to a year to complete the official review of the shooting, and that’s hard to comprehend. It’s way too long, especially now that deadly force against people of color is under a microscope. And this isn’t the only recent use-of-force case in L.A. County that’s raised questions. A month after the Hernandez shooting, 18-year-old Andres Guardado was shot in the back five times by a Los Angeles County sheriff’s deputy in a case with at least as many unanswered questions.

Sure, it’s easy to second-guess police actions from a safe distance. But when lives are taken, it’s a public duty to ask why, and to challenge the answers.

And even if Toni McBride is found to have acted appropriately, I think that as a general rule, if you want to be a cop who commands trust and respect, it’s not a good idea to be a modern-day Annie Oakley on social media, gleefully mowing down every target in sight.

Sat Jul 25 , 2020
The compounding stresses of the coronavirus pandemic, the sudden transition to remote learning, and the politicization of schools reopening are burning out teachers. “I was on the verge of leaving,” an art teacher from Connecticut, who teaches kindergarten through fifth grade but did not want to be identified out of […] 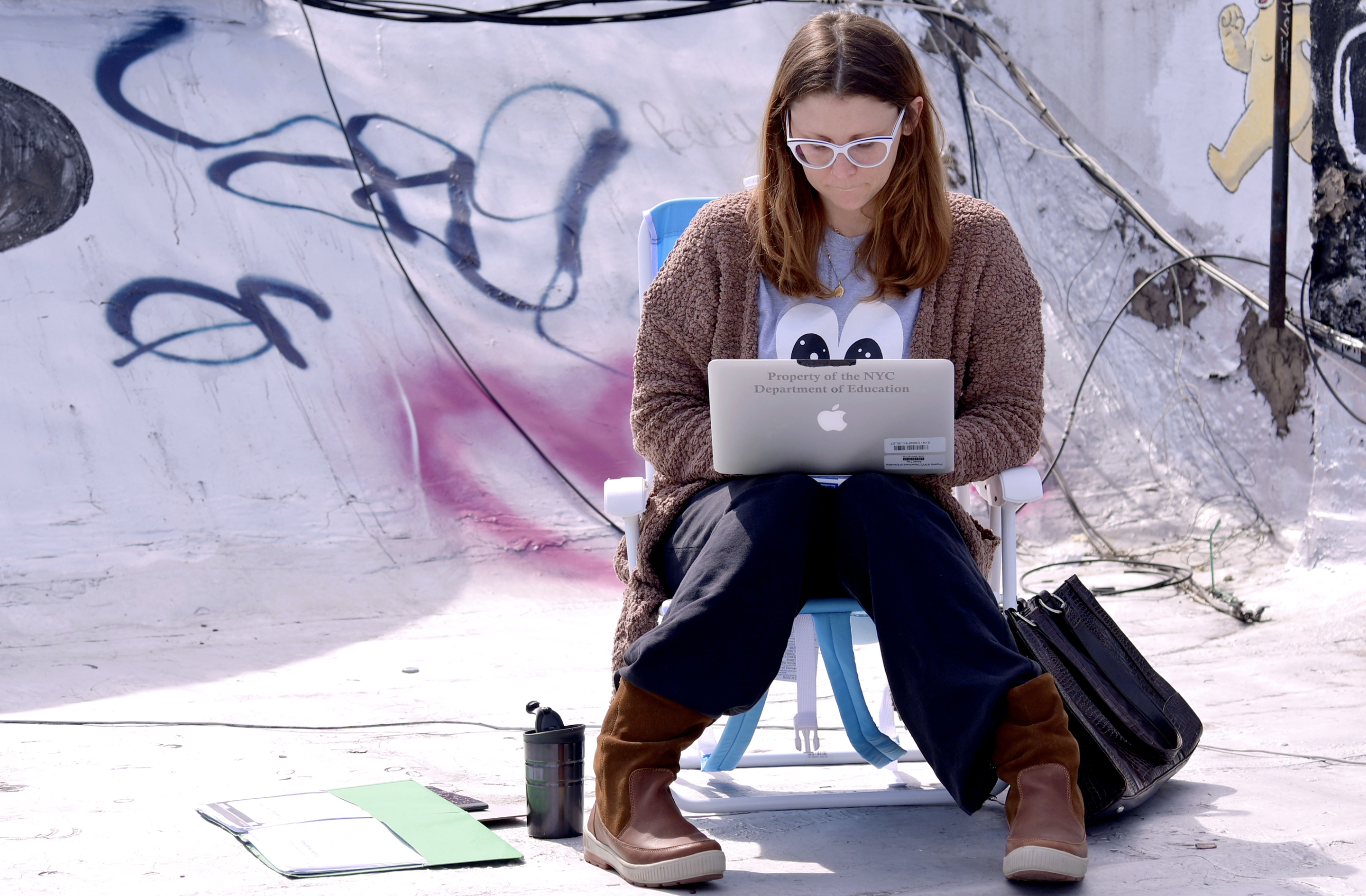