Essex police traffic officer aims speed camera at cars on dual-carriageway If your car has developed a fault, or for consumer advice, turn to Honest John by emailing [email protected] Bend it like Beckham My dad received a Notice of Intended Prosecution (NIP) for speeding. The letter clearly states the offence […]

If your car has developed a fault, or for consumer advice, turn to Honest John by emailing [email protected]

My dad received a Notice of Intended Prosecution (NIP) for speeding. The letter clearly states the offence was on May 21, 2020. The letter’s date is clearly June 14, 2020. I checked the internet and several pages say he should receive the NIP within 14 days of the offence or it is no longer valid. I can’t believe the police have made an error. What should I do? WR

If your father is the registered keeper of the car, you are correct. The Case precedent is Gidden vs The Chief Constable of Humberside. Gidden received a NIP on day 16, due to a postal strike. The prosecution argued that the strike meant their obligation to serve the notice within 14 days was eased. Gidden was convicted in the Magistrates’ Court, appealed to the Crown Court, lost his appeal, but finally had his conviction overturned in the High Court. The ruling is: www.bailii.org/ew/cases/EWHC/Admin/2009/2924.html. Well-known solicitor Nick Freeman used this argument to get David Beckham off a fine in September 2018.

In January I bought a car for cash from a large dealer chain. I later looked at the DVLA website and found the mileage had reduced by more than 11,000 since its 2019 MoT. I returned the car to the dealer and demanded my money back, as it had obviously been clocked; the manual had the most recent service blanked out. What are my chances of a refund and what action should I take? NB

The dealer is claiming due diligence in checking the mileage, but obviously did not check the MoT record. He has to give you your money back and will do so because this is a branch of a large group that cannot afford to be hauled through the courts for selling clocked cars. The Tippexed service manual is proof of contravention of the Consumer Protection from Unfair Trading Regulations 2008. I suggest you write to the dealer principal, copying your letter to the CEO of the dealer chain (I gave the name and address to NB). Write as follows: “I bought an xxxx xxxx, registered xxxxx, with a recorded mileage of xxxx from your Peterlee dealership on January 30. On March 3 I checked on the DVLA website and found the mileage at its last MoT was recorded at xxxx. The details of its last service had also been obscured in the service book. This leads me to believe that the mileage has been reduced by 11,000 and, under the Consumer Protection from Unfair Trading Regulations 2008, under Clegg v Olle Anderson (trading as Nordic Marine) House of Lords 2003 and under the Consumer Rights Act 2015, I wish to reject the car registered xxxxx for a full cash refund. Please facilitate this within seven days of receipt of this letter by telephoning me on xxxxxxx.” Send it by Royal Mail Special Delivery, keep a copy and the certificate of posting, use the reference code to check it was delivered and print out the certificate of delivery, then staple them all together in case you need them in the future to prove you attempted to resolve the matter reasonably without going to law.

I was excited to read in  your column that the future of motoring is “hydrogen fuel cell plug-in hybrids (FCPHEVs)”. But are these the same as petrol/electric hybrids that are now on the same government hit-list as all petrol and diesel engines earmarked for the chop by 2035? MC

No. They run on hydrogen fuel cell-generated electricity or stored electricity. Nothing carbon-based is required. The Mercedes Benz GLC F-CELL has a 211hp electric motor, Lithium-ion battery and PEM hydrogen fuel cell. The H2 tank capacity of 4.4kg gives a hydrogen range of up to 299 miles. Combined hydrogen consumption in hybrid mode is 0.34 kg/100km. Electric consumption is 13.7kWh/100km. Being an FCPHEV gives it the advantage over FCEVs of not having to rely on finding hydrogen filling stations. Unfortunately, MB now seems to be abandoning FCEVs on cost grounds.

I saw a 2001 Mercedes-Benz 320SL listed online for £13,995. Is this a fair price, and would you recommend that I book an independent person/association to carry out a thorough inspection? WF

From the web link you supplied, it looks a very nice car and the price level puts it around that of a very good previous-generation R107 SL, though this R129 version is the better car. If you are in any way uncertain, or afraid to take the risk, you had better employ an independent inspector such as DEKRA or Scotia Vehicle Inspections. If I were buying, I’d physically check the car out myself, look for rust and repairs and, on an R129, pay particular attention to the electrics and the automatic transmission. Make sure every single thing works. If the hard top is on the car you need to have it taken off and check the hood carefully for tears. (A new hood is at least £500 plus fitting.) It seems relatively cheap compared to the other R129s on the page. Use a fridge magnet to check for filler in the bodywork. Look for rust in the bulkhead scuttle vent well and under the rear side windows of the hard top.

My son was involved in negotiations with a dealer in Blackpool for a budget car. As he lives in Edinburgh, he proposed having the car independently assessed by a mechanic and he would decide if he was still interested when he received the report. To ensure that the dealer wouldn’t sell the car in the interim, my son proposed payment of a refundable deposit; the dealer suggested £300 and my son paid by bank transfer. A potential problem was highlighted with possible replacement of the catalytic converter. The dealer suggested a warranty at cost price of £200, but would not cover the first 30 days. My son suggested tweaking the price to reflect the situation and the dealer said he would respond. To his astonishment my son discovered online that the car had been sold, so requested repayment of the deposit. The dealer was uncooperative and said he had been put to a lot of trouble and had sold the car at a reduced price. He hung up on my son having stated that he would keep the whole deposit and has avoided contact since then. What can my son do? FM

Your son made a £300 deposit on a car. The sequence of events led the dealer to believe that your son was not going to buy the car, so he sold it. The proposed warranty could not cover any problem already existing in the car. The dealer must therefore return the £300 deposit to your son. Nothing else. The dealer is not liable to pay for the mechanic’s inspection. Use www.gov.uk/make-money-claim.

For tips and advice, visit our Advice section, or sign up to our newsletter here

Fri Jun 26 , 2020
A crowd of 500 people gathered under an expansive blue sky at the base of a rusty bridge that crosses the Intracoastal Waterway in Belle Chasse, Louisiana, on June 12. Most wore black T-shirts that read “Black Lives Matter” and carried signs echoing the words and names of Black Americans whose deaths have […] 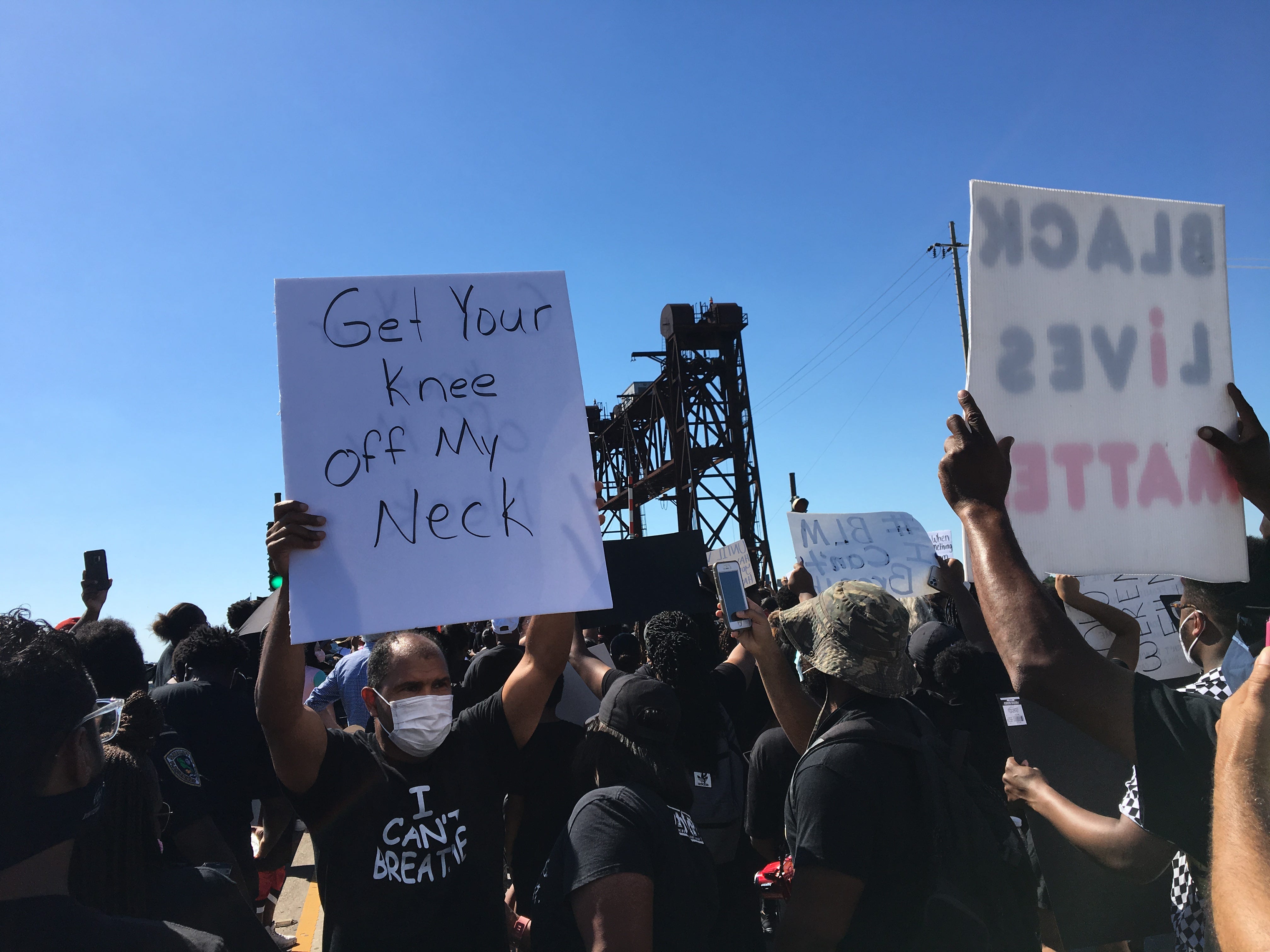