Click here to read the full article. Earlier this week, the cast of 1998’s “The Parent Trap” reunited for the first time since the movie was made. The film’s stars Dennis Quaid, Lindsay Lohan (who played twins Annie and Hallie) and Elaine Hendrix (Meredith Blake) joined Katie Couric to reminisce. […]

Earlier this week, the cast of 1998’s “The Parent Trap” reunited for the first time since the movie was made. The film’s stars Dennis Quaid, Lindsay Lohan (who played twins Annie and Hallie) and Elaine Hendrix (Meredith Blake) joined Katie Couric to reminisce.

Variety caught up with Quaid, who plays Nick Parker in the film, to talk about his memories, what he remembers about meeting Lindsay Lohan for the first time, whether he’d want to do a “Parent Trap” sequel and his memories of the late Natasha Richardson, who played Elizabeth James. Quaid also talks about his new podcast production company Audio Up and teases a new animated podcast series.

It’s been 22 years since the cast of “The Parent Trap” last got together — what was the reunion like?

I can’t believe it, just to see how it has sustained itself over the years and to see how popular it is has been a real joy.

The last time I saw Lindsay was a few years after we shot the film. I’ve seen Lisa (Lisa Ann Walter, who played Cheesy), but the reunion was such a warm feeling. It felt like a wrap party.

Half an hour before we shot the reunion, I looked online and I found a script from the film and sent it to everybody. That’s how Lindsay and I wound up doing that car scene moment because it was one of our favorite scenes.

What are some of your favorite memories from filming the movie?

It was working with Lindsay because she is so fantastic. I remember the first time I met her, she was 11, and it was at her screentest. There were three or four other girls at the time, and she came over to the crafts table and we just talked.

I couldn’t believe she was 11 because she was just the smartest kid that I had ever met. And it was obvious that she was going to be somebody beyond this film.

Working with Natasha is probably one of my most cherished memories. She was vibrant, warm, intelligent and such a giving person. And that was the thing, she was the most important piece missing from the reunion, but it felt like she was there in spirit.

The film is loved by so many people, have your children seen it?

They’ve seen the film at least 30 times. When the movie came out on DVD, it was such a phenomenon, and it became this babysitter movie for children. People would have it on in their houses all the time. It was always playing somewhere and kids would watch it at least 30 times.

Since its release and with the evolution of the internet, the character of Meredith has become an internet icon and a meme. What do you make of that?

She’s the new Cruella de Vil. It was the best casting for her and she plays it with such aplomb.

You were just coming off, “Playing By Heart” at the time, what did you think when you first read the script for the film?

If you’re an actor in Hollywood, you need to remake yourself every once in a while and have a new persona. I started off playing bad boys in my career. I was in a transition in the ’90s of where do I fit in as far as my screen persona went? When I saw “The Parent Trap,” I thought, “Why would they want me to do this?” It wasn’t that I was reluctant, I was just taken aback by it, but my agents thought it was a great idea.

I had met Nancy Meyers and producer Charles Shyer at my agent’s Oscar party, we talked, and I really liked them. I just wanted to go for a ride with them because they were really talented people who knew what they were doing and I had seen their movies.

How did they decide which parent kept which twin, was that ever discussed?

Here’s the mystery about the story because this is ultimately about the parents. They meet on this cruise from London to New York. They consummate the marriage and get off the boat. They have the children and they break up.

I don’t know if they flip a coin…maybe they tossed a coin.

There’s a scene where I ask Elizabeth, “Why did you leave?” and she replies with something really shallow like, “Why didn’t you come after me?”

The kids never see or know about each other for the first 11 years of their life. But it all fits and the story works on that level. There’s been a lot of divorce in our society and there’s this fantasy of kids yearning to put their parents back together again. I actually think the story itself comes from an old German fable which is actually a bit more grisly from what I’ve heard.

You’re keeping busy with your podcast series, “The Dennissance ” and “The Pet Show.” How did you get into podcasting?

I had never listened to a podcast until about three years ago. My friend and co-founder of Audio Up, Jared Gutstadt asked me to be on a podcast, “Bear and a Banjo,” for iHeart Radio. He was making a concept album with T Bone Burnett and Bob Dylan and I found it to be intriguing.

It was the first time a podcast had been used to launch a record. It turned out to be a huge success and ended up being the No. 2 music podcast that year, and we decided to start making more.

We have “The Pet Show” which is a lot of fun, and we have others in the pipeline. There’s one that I’m hoping to launch which will be an animated series. It’s “Nashville” meets “South Park.” Gary Busey plays Uncle Drank, a gulf and Western star who has been on this 30-year bender. Singer Kinky Friedman plays his manager. We’re going to have other country singers make appearances, and I’m going to play Uncle Drank’s blender, Blendee. It’s going to have raucous humor and be raunchy.

If “Innerspace” were to have a sequel set 35 years in the future, would you want to be a part of it?

There may be a version of “Innerspace” reunion coming your way soon. I can’t give it away.

Would you be open to doing a “Parent Trap” sequel?

Let’s name some films and give me a sentence on the first thing that comes to mind. Let’s start with “Suspect”

Liam Neeson is an amazing actor.

The director telling me to tone it done on the kissing scene and saying, “It’s a screen kiss.”

“Postcards from the Edge”

Mike Nichols howling with laughter from the other room.

“The Day After Tomorrow”

Stay where you are, I will come for you.

Fri Jul 24 , 2020
FreightWaves, one of the leading providers of freight data and analytics, has raised $37 million in two rounds of minority investment since April. The latest round was led by Kayne Partners Fund, the growth private equity group of Kayne Anderson Capital Advisors, L.P. Kayne Partners Fund has committed $30 million […] 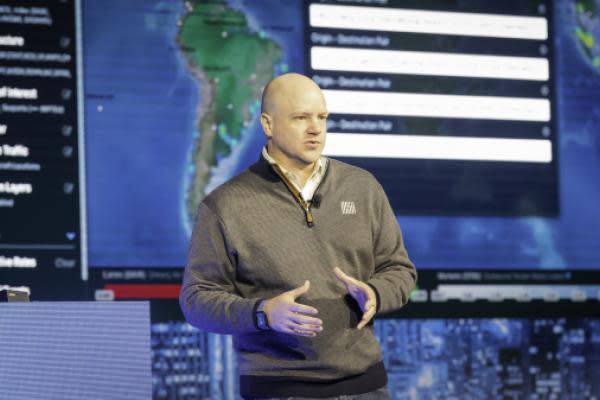