Donald Trump wasn’t halfway through his speech in Tulsa, Okla., and Democratic ad makers in Washington and New York were already cutting footage for an air raid on the slumping president.

They didn’t focus on the president’s curious monologue about his difficulties descending a ramp or drinking water at West Point, the small crowd size of the Tulsa event or even his use of the racist term “kung flu.” Instead, the ads zeroed in on Trump’s admission that he urged officials to “slow the [coronavirus] testing down.”

It’s a reflection of a growing consensus among Democrats about what kind of hits on Trump are most likely to persuade swing voters — and which ones won’t. As in 2016, ad makers are focusing on Trump’s character. But unlike four years ago, they are no longer focusing on his character in isolation — rather they are pouring tens of millions of dollars into ads yoking his behavior to substantive policy issues surrounding the coronavirus, the economy and the civil unrest since the death of George Floyd.

“You can’t chase the Trump clown car,” said Bradley Beychok, president of the progressive group American Bridge. “Him drinking water and throwing a glass is goofy and may make for a good meme, but it doesn’t matter in the scheme of things … What people care about is this outbreak.”

Until recently, it wasn’t entirely clear what, if anything, worked against Trump. From the moment he announced his presidential campaign five years ago, not even the most incendiary material seemed to cause significant damage. Not calling Mexican immigrants “rapists,” not “blood coming out of her wherever,” not “grab them by the p—y” — all of which were featured by Democrats in character-based ads attacking Trump.

By Election Day, most voters didn’t find Trump honest or trustworthy, according to exit polls. But they voted for him anyway. And throughout much of his first term, including his impeachment, Democrats struggled to find an anti-Trump message that gained traction.

Multiple outside groups said they began to test their ads more rigorously than in 2016, using online panels to determine how likely an ad was to either change a viewer’s impression of Trump or to change how he or she planned to vote. Priorities USA, a major Democratic super PAC, alone expects to test more than 500 ads this cycle. Priorities, American Bridge and other outside groups, including organized labor, have been meeting regularly to share internal research and media plans.

“One thing we saw in polling a lot before the coronavirus outbreak is that people didn’t think he was a strong leader or a good leader, they complained about his Twitter,” said Nick Ahamed, analytics director at Priorities USA. “But they had a hard time connecting those character flaws they saw in him with their day-to-day experience.”

Trump’s response to the coronavirus pandemic and recent protests, he said, “really made concrete for people the ways in which his leadership has direct consequences on them and their loved ones … It’s easier to make ads that talk about his leadership than before the outbreak.”

The advertising elements that appear to work, according to interviews with more than a dozen Democrats involved in message research, vary from ad to ad. Using Trump’s own words against him often tests well, as do charts and other graphics, which serve to highlight Trump’s distaste for science. Voters who swung from President Barack Obama to Trump in 2016 — and who regret it — are good messengers. And so is Joe Biden, whose voice is widely considered preferable to that of a professional narrator. Not only does he convey empathy, according to Democrats inside and outside Biden’s campaign, but using Biden’s voice “helps people think about him as president,” said Patrick Bonsignore, Biden’s director of paid media.

But the ad makers’ overarching takeaway from their research was this: While Trump may not be vulnerable on issues of character alone, as he demonstrated in 2016, he is vulnerable when character is tied to his policy record on the economy and health care.

“What we’ve learned form a lot of previous experience … is that quite honestly, people who work in politics can be bad prognosticators in terms of which ad will work,” said Patrick McHugh, Priorities’ executive director. “You see a lot of times the videos that go viral on Twitter … you test those ads, and more often than not they backlash … they can move voters toward Trump.”

For the negative ad industry, the coronavirus has been a bonanza because it inextricably linked both the economy and health care. On the evening of his Tulsa rally, American Bridge, which had already been working on an ad pummeling Trump for his response to the coronavirus, bookended its material with Trump’s acknowledgment that he urged officials to “slow the testing down.”

Biden’s campaign rushed a video onto social media skewering Trump for the admission. And Priorities USA, the Biden campaign’s preferred big-money vehicle, was on TV within days with Trump’s testing remarks in the swing states of Wisconsin, Pennsylvania, Arizona and Michigan.

Trump complained on Twitter that “the Democrats are doing totally false advertising.” But after the Democratic National Committee posted its first TV ads since 2016 — one asserting that Trump had “brought America down with him” and the other a more focused critique of his handling of China and trade — even the president acknowledged the effectiveness of the assault.

“On the campaign they’ll say such horrible things about me. It’s a very unfair business,” he said on Fox News. “But the ad [Democrats] did this morning, it’s a great ad for them.”

In one obvious way, assailing Trump is less complicated for Democrats than it was four years ago. Trump is the incumbent now, and for the first time he has a record of governance. Pointing out historic economic and public health crises in ads is not rocket science.

Trump’s approval ratings, both overall and on his handling of the coronavirus, have tracked downward since March, when outside Democratic groups began running advertisements against him on the issue. A Reuters/Ipsos poll last week put public approval for his response to the coronavirus pandemic at 37 percent, the lowest mark on record.

“There are more voters on the table now than there have been in a long time,” Becca Siegel, Biden’s chief analytics officer, told POLITICO. “Many, many voters who are persuadable and open to hearing these messages.”

And Trump keeps providing fodder. As outside groups began running ads featuring Trump’s “slow the testing down” remark last week, one Democratic strategist said, “Everybody is going to put this into their ads. This is something people are going to see on their TVs … for the rest of the cycle.”

For Biden, it is difficult to argue anything isn’t working at the moment. He is flattening Trump in national polls and running ahead of him in most swing states.

Yet voters still know less about Biden than Trump, according to internal polling from both parties, and there is an undercurrent of tension within the Democratic Party about how much effort to spend attacking Trump versus building Biden up.

In a study based on data from tens thousands of survey participants — and cited frequently by Democrats — researchers at the University of California, Berkeley and Yale University found earlier this month that messages about the lesser-known candidate, Biden, were more effective at persuading voters than messages about Trump.

Echoing the study’s findings, David Doak, a retired longtime Democratic strategist and ad maker, said that while “the race is being decided right now by the negativity towards Trump … what I would do if I were the Biden [campaign] is to try and fill in that favorability, to strengthen what he’s getting there and move his favorability rating up.”

Jimmy Siegel, an ad maker who worked on Clinton’s 2008 campaign and for Michael Bloomberg this cycle, said, “You need more positive Biden stuff” — what another strategist called “more Biden cowbell.”

“I think Democrats have had a theory of the case against President Trump for a while, but it really hasn’t been until the last few months when it started finally getting traction,” said Mark Putnam, the famed Democratic ad maker who worked for Obama and also for Biden before parting ways with the campaign last year. “He almost seemed to have some kind of anti-gravity secret that allowed him to consistently screw things up and yet never pay a political price for it. And with just the way he’s handled one crisis after another in really the worst possible way, it’s finally sinking in.”

However, Putnam said, “That’s only half the battle … We also have to offer an alternative.”

Unite the Country, the super PAC that Putnam is working with, has released several TV and digital ads highlighting Biden’s biography and record on the economy, including a spot featuring Biden’s childhood home in in Scranton, Pa. — complete with the bed Biden slept in as a child that Putnam’s team found stored in the attic when they arrived.

And Biden’s campaign itself began working this month to define the former vice president — and Trump — for a general election audience, releasing two ads as part of a $15 million buy, his first major advertising offensive of the general election campaign.

Just as the outside Democratic groups did, Biden’s campaign tested those ads with online panels, finding versions that used Biden’s own voice performed “dramatically stronger” than those using a professional narrator, the Biden campaign’s Bonsignore said.

In one ad, Biden talks about the economy, offering only an implicit contrast with Trump.

But Biden’s other ad cuts a much sharper contrast — staying with Democrats’ relentless criticism of the incumbent. It includes footage of Trump posing with a Bible outside St. John’s Episcopal Church near the White House after officials forced protesters from the area, as well as an image of Trump’s “both sides” reaction to the deadly violence at a white supremacist rally in Charlottesville, Va. — an episode that has gained new resonance amid the racial unrest surrounding Floyd’s killing.

The ad recalled Hillary Clinton’s first ad of the 2016 general election, when Clinton used footage of Trump encouraging violence at a campaign rally and mocking a reporter’s disability to make a call for unity.

But there was one significant difference from the 2016 attack on Trump. Four years ago, said Tad Devine, who was a senior strategist to Bernie Sanders’ 2016 presidential campaign, issues of character proved irrelevant in general election advertising “because people weren’t voting on it” — there was no connection to draw between Trump’s character and a record of governance that did not yet exist.

This year, he said, “That is absolutely the weakest front for Trump … Things have changed so dramatically, and the connection between the character of the president and that president’s ability to protect people, whether it’s from economic collapse or pandemic, is really important.”

The contrast works, Devine said, because “people are so desperate to turn the page from what’s happening in America today.”

Death of a car salesman looms as dealers go online

Thu Jul 2 , 2020
The Covid-19 crisis has driven the UK’s 4,500-strong franchised car dealer network to a Darwinian junction: adapt to survive or risk extinction. Car dealerships have been open to process sales since early June but demand to splash out on big-ticket purchases has plummeted as the UK enters a huge recession. The Society of […] 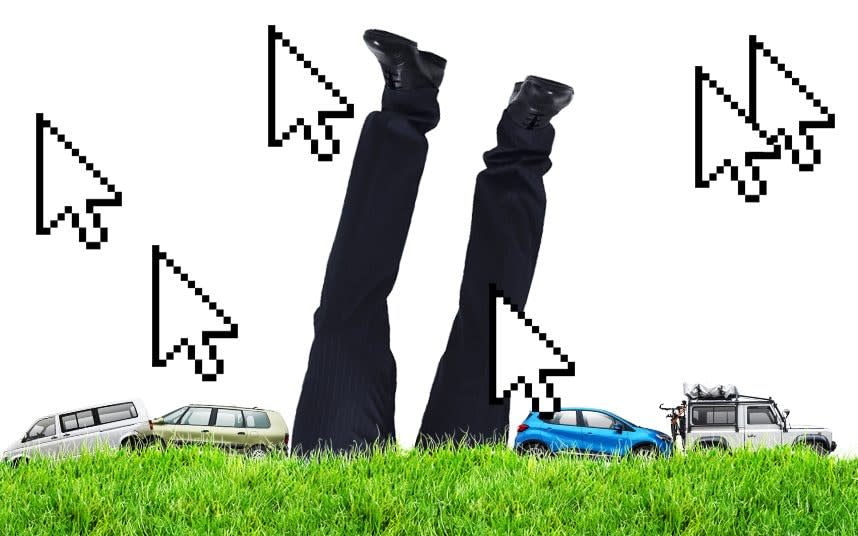