COLUMBUS, Ohio (AP) — Even if it weren’t for her disability and fear of catching COVID-19, Delinda Bryant said getting the necessary postage to cast a ballot this year will be a struggle. Bryant, 63, doesn’t have $10 for a book of stamps, a printer to make them at home […]

COLUMBUS, Ohio (AP) — Even if it weren’t for her disability and fear of catching COVID-19, Delinda Bryant said getting the necessary postage to cast a ballot this year will be a struggle.

“My car needs its transmission fixed, but my utilities are so high I can’t afford it,” the south Georgia woman said in testimony for a federal voting rights lawsuit. “Ten dollars for a book of stamps is a hardship.”

As more states embrace mail-in voting amid the coronavirus pandemic, the often overlooked detail of postage has emerged as a partisan dividing line.

Questions over whether postage will be required for absentee ballot applications and the actual ballots, who pays for it and what happens to envelopes without stamps are the subject of lawsuits and statehouse political brawls.

“Charging money for the right to vote is unconstitutional, whether it’s a penny or a dollar,” said Sean Young, legal director of the ACLU of Georgia, which is representing Black Voters Matter. “Many voters lack internet access. Many voters lack a credit card, which is required to buy stamps online. One voter did not receive his book of stamps for two weeks after he ordered it.”

The postage debate has become vehement in Ohio, where the state elections chief, a Republican, has asked for the authority to pre-pay postage on absentee ballot applications and the ballots themselves. So far, the GOP-led Legislature has resisted.

Opponents of the proposal by Secretary of State Frank LaRose argue that pre-paying postage could lead to more mail-in ballots being requested than used. Voters who requested a mail-in ballot but for whatever reason — choose to vote in person on Election Day will have to cast a provisional ballot so local election boards can be sure they did not vote twice. About 20% of provisional ballots are typically rejected.

During floor debate in June, state Rep. Bill Seitz, a Cincinnati Republican, said it’s also an added expense in a year the virus has ravaged government budgets. It would cost the state $1.5 million on top of the $1.5 million Ohio already is paying to mail ballot applications for November’s presidential election.

“So it would be expensive at a time when we’re facing economic depression, economic problems throughout the state,” he said. “And this is not the time to be needlessly spending money.”

“We always hear the same rhetoric,” said Aklima Khondoker, a staff attorney with the Georgia ACLU. “’It’s too expensive, it’s going to lead to fraud, it’s an administration issue.’ No, it’s not. It’s racism.”

She said postage requirements disproportionately affect people of color, who are less likely to have the income, transportation or time to obtain stamps.

The postage debate has extended this year to include young voters, who have little experience sending and receiving paper mail and visiting post offices. As part of its lawsuit, the Georgia ACLU submitted statements from young voters who had never used a stamp.

Another complication with requiring stamps is knowing how much postage to use.

Election boards are required by federal postal regulations to include in a voter’s packet exactly how much postage is required to return their ballot. Some states, however, require a copy of a valid ID, verification of college enrollment status or notary documentation, and that can add an unknown amount of weight to the ballot, which requires more postage.

Marti Johnson, a spokeswoman for the U.S. Postal Service, said the post office delivers every piece of election mail to its destination — with or without adequate postage.

“We are proactively working with state and local election officials on mailing requirements, including postage payment,” she said in a statement. “In cases where a ballot enters the mailstream without the proper amount of postage, the Postal Service will collect postage from the appropriate Board of Elections.”

Advocates argue that most voters, and particularly voters who fear being disenfranchised, aren’t likely to mail a ballot without postage and trust the system to deliver it.

But Khondoker, of the Georgia ACLU, said the exact amount required is beside the point.

“The stamp issue is not about two adhesive pieces of paper that we put on an envelope,” she said. “It’s about what it means to families and individuals. It’s about an additional sacrifice they have to make to exercise a right that’s fundamental to our democracy, one they’re guaranteed in the Constitution.”

Not all court rulings have gone in advocates’ favor.

In Florida last month, U.S. District Judge Robert Hinkle rejected a motion by liberal groups that would have required free postage for mail-in ballots on the grounds that stamps represent a poll tax. Hinkle compared stamps to the costs voters incur when driving or riding the bus to the polls.

“Postage charged by the United States Postal Service — like the fee charged by any courier or the bus fare for getting to the polls to vote in person — is not a tax,” Hinkle wrote.

Facing a similar legal argument in South Carolina, the state’s Election Commission recently went the other way. It agreed as part of a stipulation to provide prepaid absentee ballots for the November election “regardless of the number of voters deemed qualified to vote by absentee ballot.”

25 Products Made Specifically to Calm Your Anxious Dog

Sat Jul 18 , 2020
Everything from fireworks to thunderstorms can wreak havoc on a dog’s mental and emotional well-being. A recent Pro Plan Veterinary Supplements online survey by Relevation Research found 63 percent of dog owners have pups who display some type of anxious behavior. About half of the respondents, 47 percent, said loud […] 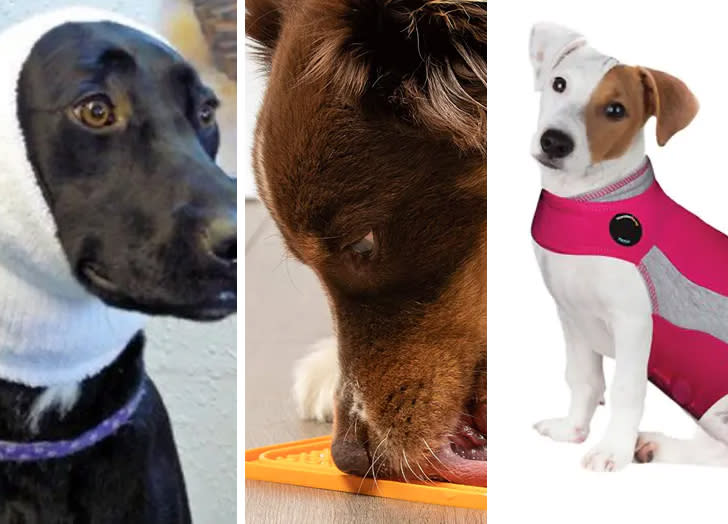