“Any state that is having a serious problem, that state should seriously look at shutting down,” Dr. Anthony Fauci, director of the National Institute of Allergy and Infectious Diseases, said on “The Journal” podcast.

Trump, who has complained that the CDC’s requirements for schools to reopen in the fall are too difficult and expensive, took to Twitter to blame increased testing for the nation’s booming number of coronavirus cases.

Here are some recent developments:

📈 Today’s stats: The U.S. has surpassed 3 million confirmed cases and 132,300 deaths, according to John Hopkins University data. Globally, there have been 12 million cases and almost 550,000 deaths.

📰 What we’re reading: Hundreds of millions of dollars has gone to COVID-19 contractors accused of prior fraud. Those contracts range from masks and medical equipment to janitorial cleaning, video productions and even ferryboat services.

Our live blog will be updated throughout the day. For first-in-the-morning updates, sign up for The Daily Briefing.

Federal health guidelines for reopening schools across the nation will not be altered despite President Donald Trump’s complaints that they are too difficult and expensive, the director of the Centers for Disease Control and Prevention said Thursday.

Vice President Pence said Wednesday that Trump doesn’t “want the guidance to be too tough. That’s the reason why, next week, CDC is going to be issuing a new set of tools, five different documents that will be giving even more clarity on the guidance going forward.”

Documents, yes, easier guidelines, no, the CDC’s director, Dr. Robert Redfield, said Thursday. “Our guidelines are our guidelines, but we are going to provide additional reference documents to basically aid communities in trying to open K-through-12s,” Redfield said. “It’s not a revision of the guidelines.”

Later in the day, White House press secretary Kayleigh McEnany confirmed the current guidelines would not be rescinded but the CDC would will issue “supplemental guidance.” She also reiterated Redfield’s statement that the guidance is not binding and that localities will make their own decisions.

The number of deaths from COVID-19 skyrocketed in Florida with a record-setting 120 fatalities reported Thursday, according to the Florida Department of Health. The previous highest single-day total had been 83. The soaring toll came on a day when Florida surpassed 4,000 deaths during the pandemic. The current total of 4,111 fatalities ranks ninth among states.

An additional 8,935 cases were reported in Florida, pushing the state’s total to 232,718, third in the nation behind New York and California. Florida has added 118,700 new cases in the last two weeks, more than half of the total.

Fauci says some states might need to shut down again

Dr. Anthony Fauci, director of the National Institute of Allergy and Infectious Diseases, says some states seeing booming numbers of cases should consider shutting down again. Leaders cannot ignore the data and push forward with reopening plans, he said. Fauci, one of the nation’s top infectious disease experts, has warned that new coronavirus infections could increase to 100,000 a day if the nation doesn’t get its surge of cases under control.

Students in Palm Beach County public schools will continue learning from home when classes resume next month despite a state mandate to open schools. Under increasing pressure from teachers and local health experts, the seven-member board of county commissioners unanimously agreed to keep classes online only for the district’s 174,000 students until the coronavirus pandemic improves. Florida has seen a surge in cases in recent weeks, and the state death toll surpassed 4,000 Thursday.

Transportation Security Administration officers will be have to change their gloves more frequently and wear face shields when screening passengers as the agency implements changes to prevent the spread of the coronavirus. The come after a whistleblower complaint last month by a TSA official that the agency failed to provide enough protective equipment to personnel who come into close contact with the traveling public.

“I have no doubt whatsoever that our people became Typhoid Marys and contributed to the spread of that virus because TSA senior leadership did not make sure (screeners) were adequately protected,” Jay Brainard, the top TSA official in Kansas, told The Associated Press last month.

California security guard charged with murder after confrontation over mask

A California security guard has been charged with murder and possession of a handgun by a felon in the fatal shooting Sunday of a supermarket customer following a confrontation over wearing a mask. Prosecutors say Jerry Lewis, 50, reportedly entered the market in the Los Angeles suburb of Gardena without a mask and got into an argument with security guard Umeir Corniche Hawkins, 38. After a confrontation, Lewis was fatally shot as he walked away, prosecutors said.

Bail for Hawkins, convicted in 2013 for assault by means of force, was set at $1 million. He pleaded not guilty and could face a sentence of 50 years to life in prison if convicted.

Mississippi Gov. Tate Reeves is warning the public to get tested for the coronavirus if they have been in contact with a state lawmaker. The number of cases linked to an outbreak at the Capitol in Jackson has grown to 36, which includes 26 legislators, according to the state health officials. Many politicians flouted recommendations to wear a mask inside the Capitol in recent weeks. Now, about one in six of Mississippi state lawmakers have tested positive for the coronavirus, including House Speaker Philip Gunn and Lt. Gov. Delbert Hosemann.

Reeves warned that Mississippi’s health care system will be overwhelmed if the state does not change its trajectory on coronavirus cases and hospitalizations: “The fact is that the crunch on our hospital system is not a hypothetical. It is not in the future.”

Teachers feel pressure to return to classrooms in fall

Despite soaring numbers of  COVID-19 cases across the nation, officials are pouring on pressure to reopen schools full time this fall. On Monday, Florida’s education commissioner ordered the state’s schools to open full time in August. U.S. Education Secretary Betsy DeVos on Tuesday criticized plans to offer in-person instruction only a few days a week. And on Wednesday Vice President Mike Pence said the Centers for Disease Control and Prevention is reworking its guidance on reopening schools after President Donald Trump complained the guidelines were too tough.

“Am I going to look at my students as if they are potentially going to kill me,” asked Sarasota (Florida) High teacher Mary DeArment, 59. “I hate that.”

Are you ready for some football? Some high schools gear up despite pandemic

A large number of high school football teams across America, including in hotbeds such as Florida and Texas, are moving forward during the pandemic despite the risks. California, however, is among the states still undecided; the California Interscholastic Federation is set to announce a decision July 20. High school teams in Tennessee are barred from any contact drills until a COVID-19 state-of-emergency expires Aug. 30, and no decision has been made about the football season.

Arizona has joined Florida, Texas and several other states feeling the strain of surging COVID-19 cases on its health care system. Ominous records fell Tuesday – 3,421 inpatient hospital beds were occupied by suspected and confirmed COVID-19 patients; 871 ICU beds were filled;  2,008 emergency room visits were logged. Rapid case increases and hospitalizations have made Arizona now among the worst hot spots in the nation for COVID-19. Health officials caution people to stay home unless necessary to leave and to wear masks in public.

“Arizona is grateful for the women and men on the front lines of this pandemic,” Gov. Doug Ducey said. “We’re grateful for all of our citizens who are being responsible.”

Shelter-in-place order issued for U.S. base in Japan

A shelter-in-place order was issued at the U.S. Naval Air Facility Atsugi in Japan because of an ongoing investigation of positive coronavirus cases, the base announced Thursday on its Facebook page. Atsugi, about 20 miles southwest of Tokyo, is home to about 10,000 servicemembers, support staff and family members.

“This shelter-in-place directive has been put in place to safeguard the community and prevent any future spread,” the post said. “Further guidance is forthcoming.”

Vaccines won’t be only answer; closing in on COVID cure

Four months ago when COVID-19 first arrived in the United States, health care workers relied solely on intravenous fluids, fever reducers and ventilators. Today, there are two approved therapies shown to make a difference in COVID-19, and 150 treatments and more than 50 antivirals are being tested in people. Vaccines, when developed, won’t work for everyone. But researchers are getting closer to being able to identify which patients are likely to do better with which kind of therapy.

“Once somebody develops a treatment for the virus, everything will go away,” said Daniel Batlle, a kidney expert from Northwestern Medicine and professor of medicine at Northwestern University in Chicago.

California reported 149 coronavirus deaths Wednesday, the highest single-day death toll since May, according to the Los Angeles Times. Before that, the previous high was at 132 deaths. Los Angeles County officials reported 65 new coronavirus deaths Wednesday. “Our cases are rising. The rate of infection is increasing. And the number of hospitalizations are up. And today, we’re even seeing a small increase in the number of deaths,” Barbara Ferrer, the Los Angeles County director of public health, said Wednesday.

The county has 2,496 new confirmed cases. Los Angeles Mayor Eric Garcetti during a news conference Wednesday said that more than 50% who tested positive for the coronavirus are under 40 years old.

Atlanta Mayor Keisha Lance Bottoms issued an order late Wednesday requiring residents to wear a mask in public. The list of states that mandate masks is growing, but Georgia is not on it. Masks must also be worn at the Hartsfield-Jackson International Airport. Gatherings of more than 10 people are also prohibited. Bottoms’ announcement came days after she announced that she tested positive for the coronavirus.

“We will continue to take active measures to help slow the spread of COVID-19 infections in Atlanta,” Bottoms said in a news release. “Public health experts overwhelmingly agree that wearing a face covering helps slow the spread of this sometimes deadly virus.

As COVID-19 cases and deaths spike in Texas, Houston Mayor Sylvester Turner canceled the Republican Party’s in-person convention that was scheduled for next week. “The public health concern for our first responders, convention workers, and those who would have attended weighed heavily in our decision making,” Turner said on Twitter. The convention was scheduled to take place from July 16-18 at at the George R. Brown Convention Center in downtown Houston.

“Houston is a hot spot right now in a global pandemic and we cannot have thousands of people gathering inside the George R. Brown,” Turner said at a news conference Wednesday. The mayor said the city of Houston looks forward to hosting future conventions at a safer time.

Everything we know, including playable heroes

Thu Jul 9 , 2020
Square Enix, Marvel, and Crystal Dynamics teased the existence of their Marvel’s Avengers game for years before its official unveiling at E3 2019, referring to it only as “The Avengers Project” and leaving fans to speculate as to what form it might take. Now that we’ve seen the game in […] 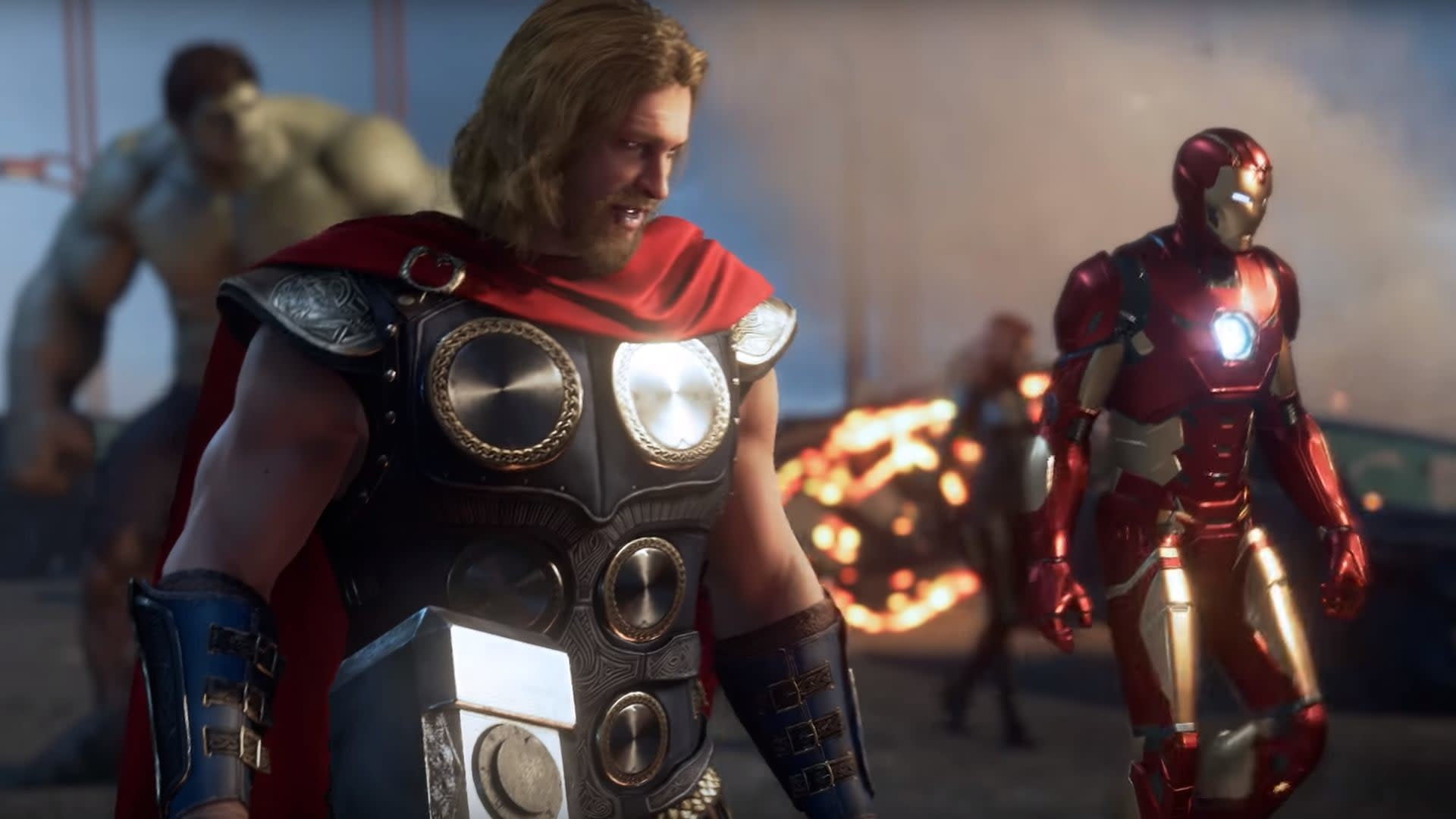