EPA For many, it felt like summer was cancelled as soon as Matt Hancock said as much on ITV’s This Morning back in early May. “I think that’s likely to be the case,” the health secretary answered when asked if sunny season would be off the agenda for the first […]

For many, it felt like summer was cancelled as soon as Matt Hancock said as much on ITV’s This Morning back in early May.

“I think that’s likely to be the case,” the health secretary answered when asked if sunny season would be off the agenda for the first time since the Second World War.

But there are now glimmers of hope that something could be salvaged as Britain’s lockdown restrictions continue to ease. Here are your questions answered…

Will I be able to go on holiday this summer?

This is contingent on several factors: the current Foreign Office blanket ban on all international travel being lifted; the host country being willing to accept tourists from the UK; no quarantine being imposed upon arrival or return to the UK; the ability to get to the airport; and the ability to fly or otherwise travel to your chosen destination.

While the FCO travel ban is still in place, the government is expected to announce this will be relaxed from 6 July.

After nearly three months of staying completely grounded, easyJet operated its first post-lockdown flight on 15 June (a domestic service to Glasgow). Other airlines are following suit, confident that the introduction of a traffic light system (determining which countries are “safe” and therefore don’t require quarantine measures) will soon make international routes possible again.

You might think that, as the “sick man of Europe”, Britons won’t be welcome elsewhere; but for a number of countries, UK visitors make up a significant proportion of their tourism market overall, and they’re keen to have us back. Spain, for example, has already opened its doors to British holidaymakers as of 21 June, without the need to self-isolate on arrival.

Italy reopened its borders for travellers from the UK and the 26 EU member states as of 3 June, and Croatia has been inviting tourists in since May.

Will I have to quarantine when I get there?

This largely depends on the country in question. Quarantining is generally implemented in countries with a low infection rate for people arriving from a country with a high infection rate (although this doesn’t hold true in the UK’s case). For example, New Zealand is “closed to almost all travellers” and demands that all arrivals self-isolate for two weeks. The country has one of the lowest infection rates in the world and a Covid-19 death toll of just 22 overall.

France is currently imposing quarantine in retaliation for the UK making French visitors to Britain self-isolate for 14 days, but it is believed to be somewhat voluntary in nature.

However, there are already a number of countries that will allow Britizen holidaymakers in without any quarantine requirements, including Spain, Italy, Portugal Turkey, Germany, Croatia, Belgium, Sweden and Switzerland.

The list could potentially grow if the government announces, as expected, a relaxation of the quarantine rules for certain countries from 6 July.

Will I have to quarantine when I come home?

At the moment the answer is yes – a 14-day quarantine was introduced on 8 June for all arrivals into the UK, including Brits returning from abroad.

The quarantine was put in place indefinitely, but on Wednesday, 1 July, the government is expected to say that the current rules will be relaxed on 6 July for a range of destinations.

Simultaneously, the Foreign Office no-go warning and the need to quarantine will be removed for travellers from a range of countries regarded as “safe” by the Joint Biosecurity Centre – which was set up to coordinate the government’s response to the pandemic.

The centre is categorising countries with a “traffic light” system. Each country is rated green, amber or red, depending on the prevalence of coronavirus, the trajectory of the disease and the centre’s assessment of the data’s reliability.

Quarantine will apply only to nations rated red.

Will anything be open if I go abroad?

It depends on where you go, but in many cases, yes. Plenty of countries across Europe are easing lockdown measures, with non-essential shops and attractions reopening.

For instance, in Venice, the famed Doge’s Palace reopened on 13 June, along with most souvenir shops, cafes and restaurants. The Leaning Tower of Pisa opened at the start of June.

Many attractions in France and Spain are open, including the palace at Versailles and the Guggenheim in Bilbao, though social-distancing measures are limiting visitor numbers and online bookings are generally required.

I’m booked but no longer want to go – can I get a refund?

Most tour operators have cancelled holidays for at least the next couple of weeks as the FCO blanket travel ban put them in a tricky position. For example, Tui was forced to can all packages until 10 July, while Jet2 Holidays has cancelled everything until 14 July.

Where the company has cancelled the trip, you’re entitled to a full refund within 14 days (though in reality it’s likely to be a much longer wait).

However, if your holiday is still scheduled to go ahead later in the summer, pulling out now would mean you forfeit any money you’ve already paid out, as your cancellation falls under “disinclination to travel”.

If you have particular health concerns it might be worth getting in touch with your travel insurance provider, although many of them have changed their terms and conditions to disallow any claims associated with Covid-19.

Contacting the holiday provider and asking to rebook for a later date next year might be your best bet. Tui is offering anyone booked up to 31 August 2020 to postpone without penalty.

Can I go on staycation?

At present, there are certain conditions under which you can stay overnight somewhere. One of these conditions is if you are a person living alone or a single parent with children under 18, in which case you’re allowed to pick one household to form a “support bubble” with and are permitted to stay the night at their home.

On 23 June, the prime minister announced a further lifting of lockdown measures in the UK, which states that from 4 July, up to two households will be allowed to stay overnight together “in self-contained accommodation”, as long as social distancing guidelines are followed.

Many English hotels are gearing to reopen from around this time in July – for example, the The Pig hotels brand is opening some properties from 4 July – complete with stringent new cleaning measures.

Just be aware that things might be a little different – breakfast buffets are likely to be scrapped, while spas could require guests to get changed in their rooms to avoid overcrowding of changing rooms.

Northern Ireland will be a day ahead, with hotels, pubs, restaurants and tourist attractions all able to open with suitable social-distancing measures.

Scotland aims to open to visitors on 15 July. At present, travel restrictions in Wales will be lifted on 6 July and self-contained accommodation will be able to re-open on 13 July.

For anyone without a car, travelling any distance will remain difficult until leisure trips by train are once again permitted.

How can I stay safe while travelling?

At the risk of sounding like a broken record, it’s the standard: “Wash your hands regularly for 20 seconds” advice. This is particularly important while in transit – at the airport and on a flight, train or ferry – because you’re coming into contact with a lot of new people. Take hand sanitiser with you where possible, as it’s easier than requesting permission to go to the loo to wash your hands (now necessary on a Ryanair flight). Wear a mask in enclosed spaces, and steer clear of anyone coughing or otherwise looking unwell.

If you really want to minimise human contact during the journey, opting to drive is probably the most effective means of avoiding others.

Will it be expensive to go on holiday this summer?

But those booking separate flights and accommodation as opposed to packages may find air fares are pricier than normal due to reduced capacity.

The Independent’s travel correspondent Simon Calder noted of easyJet’s first flight after being grounded for 11 weeks during the pandemic: “Fares on the few flights that are operating can be punishingly high: I paid £175 for the one-hour hop [to Glasgow].”

Can I get travel insurance to cover coronavirus?

Yes – but only for the cost of medical treatment, rather than cancellation.

There are still providers of new policies around, but many are excluding cover for Covid-19. One of the largest providers, Columbus Direct, says: “We are no longer able to offer cover for claims arising from, or related to, coronavirus.”

But Staysure says: “If you develop Covid-19 while on holiday and need help, you’ll be covered as long as you have declared your pre-existing conditions.” Saga is also offering coronavirus cover.

Policies bought before mid-March may still cover you for coronavirus-related claims. If you have an annual policy, your insurer may or may not allow you to renew with the same degree of cover.

For visits within the European Union, the EHIC scheme is still in operation for British travellers to the end of the year and will provide medical treatment on the same basis as local people in public hospitals across the EU.

Is it safe to go abroad?

It’s completely dependent on where you go. Many countries in Europe have managed to flatten the curve and reduce coronavirus infection rates far more successfully than the UK by using methods like early lockdown and comprehensive track and trace programmes. In fact, with the world’s third-highest death rate, it could be argued that the UK is a riskier place to be than most other countries.

It’s worth being vigilant at the airport and on the aircraft (or train, boat or any other preferred mode of transport) – taking measures such as regular hand washing and wearing a face covering – and likewise while abroad if you venture into busy, enclosed spaces. But in many cases being on holiday shouldn’t be any more dangerous than being in the UK, especially now that non-essential shops and other amenities are opening up here again.

What do the new quarantine rules mean for my travel plans?

Mon Jun 29 , 2020
Our editors independently selected these items because we think you will enjoy them and might like them at these prices. If you purchase something through our links, we may earn a commission. Pricing and availability are accurate as of publish time. Learn more about Shop TODAY. Summer is finally here, […] 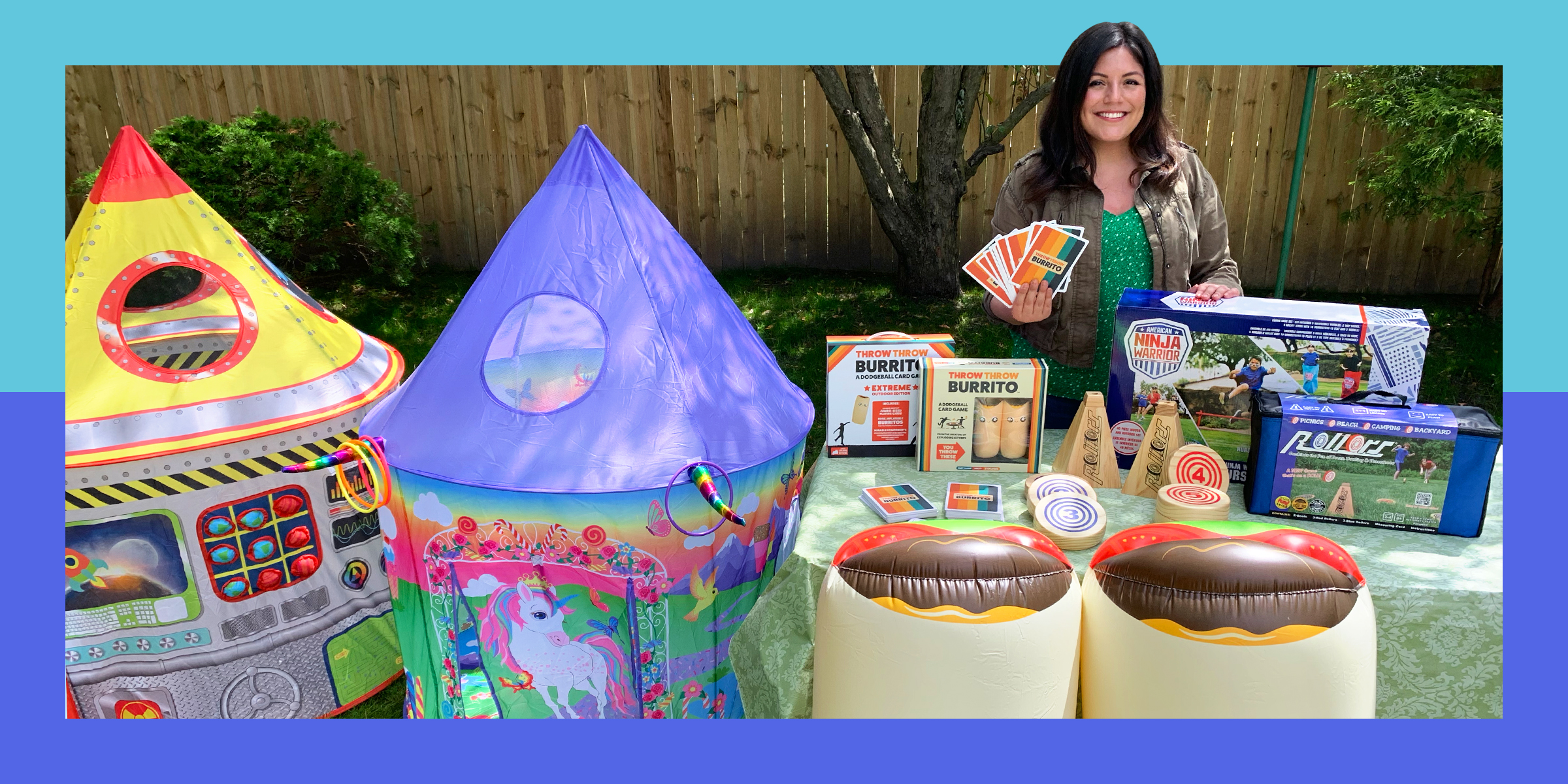