The nation’s toughest clean-air mandate on trucks was approved Thursday by the California Air Resources Board. In effect, the board ordered manufacturers of medium-duty and heavy-duty commercial trucks to begin selling zero-emission versions in 2024, with 100,000 sold in California by 2030 and 300,000 by 2035. “This is a bold […]

The nation’s toughest clean-air mandate on trucks was approved Thursday by the California Air Resources Board.

“This is a bold step we’re taking today,” said air board member Judy Mitchell, adding it is a daunting challenge, given the public investment that will be necessary for buyer incentives and charging infrastructure.

The mandate is intended to cut air pollution and push the state toward ambitious greenhouse gas reduction goals — 40% below 1990 levels by 2030 and 80% below by 2050.

Environmentalists, health advocates, climate action supporters and others voiced strong support at an online hearing Thursday before the vote. So did makers of electric trucks and buses.

“California is once again leading the nation in the fight to make our air cleaner, becoming the first place in the world to mandate zero emission trucks by 2045,” Gov. Newsom said in a statement. “Communities and children of color are often forced to breathe our most polluted air, and today’s vote moves us closer toward a healthier future for all of our kids.”

Representatives of traditional manufacturers, 95% of whose products are powered by diesel fuel, opposed the mandate and suggested it will be impossible to meet the air board’s timeline.

The mandate is “flawed,” said Jed Mandel, president of the Truck and Engine Manufacturers Assn., an industry group. “There is no charging infrastructure, there is inadequate incentive funding available” for buyers and zero-emission trucks “cost more than traditional fuel trucks,” he said.

As it approved the mandate, the board pushed infrastructure and incentive funding questions into the future.

Mandel suggested the program be delayed for two years, until 2026, to allow more time for truck-specific charging systems to be installed and for the consideration of policies to encourage the purchase of such vehicles: state incentives for buyers and a mandate on fleet operators to buy a set percentage of zero-emission trucks.

The air board will conduct a detailed survey of fleet operators with more than 50 trucks that do business in California to help determine what additional policies are needed to boost demand. The mandate takes in trucks ranging from pickups that can haul three-quarters of a ton to semi trucks that fully loaded weigh 80,000 pounds. The air board said about 75,000 such trucks are sold each year.

Dawn Fenton, government relations head for Volvo Group, said the company is committed to moving quickly into the zero-emission truck market but “we doubt the market’s readiness to absorb the volumes proposed in this regulation.”

Supporters of the mandate argued that California can’t meet its greenhouse gas goals if diesel trucks are not eventually phased out.

“The sooner we move, the sooner the skies will clear and people’s health will improve,” said Andrea Vidaurre, policy analyst at the Center for Community Action and Environmental Justice, based in Jurupa Valley near Riverside.

She emphasized that freeways, ports, distribution centers and rail yards tend to border low-income areas, increasing the health risk for people living there.

Diesel trucks contribute nitrogen oxides, particulate matter and other pollutants proven to cause lung damage, asthma, and cancer, among other serious health problems.

Several other states, most in the Northeast, plan to adopt the air board’s mandate, known as the Advanced Clean Truck initiative. “There’s clearly a national interest” in reducing pollution, said Katy Dykes, commissioner at the Connecticut Department of Energy and Environment, said Thursday.

Transportation is the largest greenhouse gas contributor in the state, pumping out more than a third of the human-produced total. Industrial and electrical power sources are second and third.

Battery electric and hydrogen fuel-cell trucks produce no vehicle emissions, although if the original source of energy is nonrenewable power plants, they still have a carbon footprint. That’s why the state also aims for 60% of electricity be produced by solar, wind and other zero-carbon sources by 2030 and 100% by 2045.

The state figures that 50% of medium-duty trucks and 30% of big rigs sold each year will be zero-emission by 2030.

Medium-duty electric trucks — mainly, large vans and box trucks with no semi-trailer — are expected to succeed faster than electric semi trucks because range requirements for their hauling jobs are lower and they can be charged at a depot overnight.

Many new players compete in this segment, including Rivian and Chanje. Calstart, a clean transportation industry group, said 169 different zero-emission commercial models will be available by the end of the year, compared with 95 in 2019. Amazon has invested in Michigan-based Rivian and said it plans to buy 100,000 electric delivery vans from the company over the next several years.

All major truck manufacturers are developing electric trucks, powered either by batteries or by hydrogen electric fuel cells. That includes Daimler’s Freightliner brand, Volvo, International’s Navistar as well as Paccar’s Peterbilt and Kenworth.

Toyota and Kenworth have begun a pilot program at the Port of Los Angeles, funded in part by California taxpayers, with 10 fuel-cell trucks. A start-up called Nikola breaks ground this month on a factory in Arizona to build fuel-cell semi trucks. Tesla announced an electric semi truck in 2017, but manufacturing plans remain on ice.

The start-ups will benefit, but the traditional manufacturers “will have a hard time dealing with this,” Antti Lindstrom, commercial truck market analyst at IHS Markit, told The Times.

While alternative energy trucks might make financial sense for fleet owners on a long-term cost of ownership basis, he said, the upfront cost of such trucks is far higher: $125,000 for a diesel semi-truck trailer is a rough industry rule of thumb versus more than $200,000 for a zero-emission equivalent, depending on the range and underlying technology.

The current lack of charging infrastructure and paucity of incentives for buyers are serious problems, Lindstrom said. And even if they are addressed, with the state in a serious budget crisis, “who is going to pay for it?”

Building out a truck-charging infrastructure is essential, air board member Barbara Riordan said. She voted for the mandate but noted that truck manufacturers such as Volvo, taking in state grants for electric-truck pilot programs, are complaining about a lack of charging stations. The state needs to “make sure we’re not creating problems we can’t overcome,” Reardon said.

Board members barely mentioned California’s budget shortfall, which stands at about $54 billion, largely due to effects of the COVID-19 pandemic.

Why 2021 truck is different

Fri Jun 26 , 2020
The redesigned 2021 Ford F-150 made its public debut Thursday night during an online prerecorded event hosted by actor Denis Leary and streamed on YouTube, Facebook and Twitter.  “There’s nothing more all-American than a truck that helps you get the job done,” Leary said during opening remarks. “The best just got even better […] 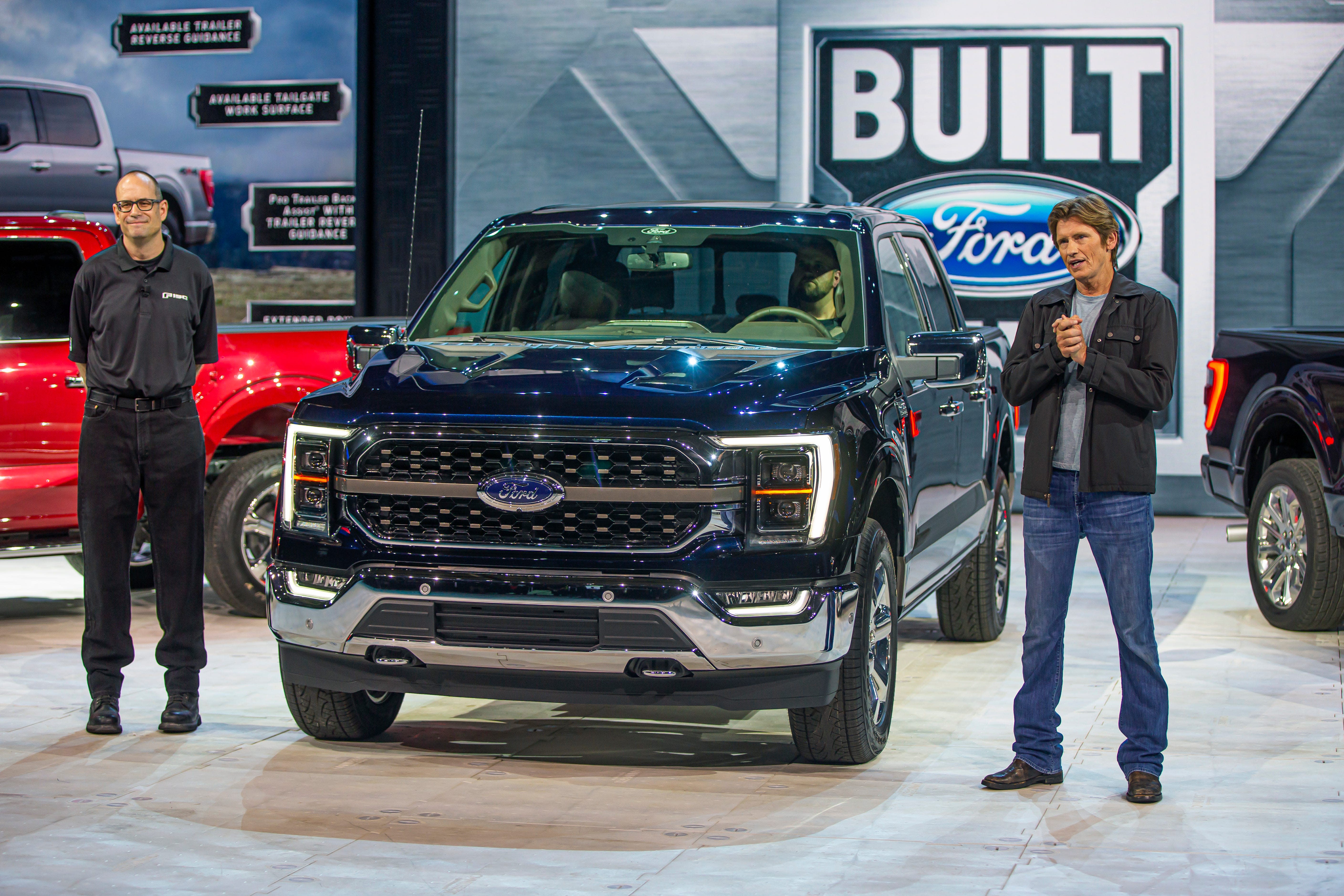