Black scientists are embracing the hashtag movement that forced the nation to take a hard look at systemic racism. As #BlackLivesMatter remains a rallying cry across the country, Black researchers and physicians are using tags including #BlackBirdersWeek, #BlackInAstro, #BlackInNeuro and #BlackInChem to lift up the achievements of their peers and call out the discrimination they face […]

Black scientists are embracing the hashtag movement that forced the nation to take a hard look at systemic racism.

As #BlackLivesMatter remains a rallying cry across the country, Black researchers and physicians are using tags including #BlackBirdersWeek, #BlackInAstro, #BlackInNeuro and #BlackInChem to lift up the achievements of their peers and call out the discrimination they face on a daily basis.

Racism has long been an issue in academia. Black scientists report high rates of both subtle and overt forms of workplace discrimination and, according to a 2019 study, are less likely than their white peers to receive funding for their research. Research published in April via the Proceedings of the National Academy of Sciences shows that underrepresented groups are innovative at a higher rate than their majority peers but their achievements are often overlooked.

So Black birders, astronomers, botanists, physicians and neuroscientists, many of them women, have taken to Twitter and Insta to draw attention to the challenges they face.

In the summer of being proudly #BlackAFinSTEM (as one popular hashtag puts it), can tweeting make a difference?

We talked to founders of six social media movements to see how racial inequality manifests in the science world and whether candid conversations on the internet can change people’s attitudes.

One of its founders: Chelsea Connor, 26, herpetologist from the Commonwealth of Dominica

When a Black bird-watcher shared a video of a white woman calling the police on him, and saying that she was being threatened by “an African American man,” it made national news. The video didn’t surprise Connor, however.

“For so many people who aren’t Black, they’re like, ‘Wait, this happens?’” she says. “Yeah, we’ve been saying this, but now people are paying attention.”

Connor, with the support of organizations like The National Audubon Society, co-founded #BlackBirdersWeek in late May to stand in virtual solidarity with the birder, Christian Cooper, and connect fellow naturalists.

In one livestream, panelists told personal stories about “birding while Black,” a shorthand used to encompass the discomfort felt and unprovoked suspicion raised when someone is working in the field. For example, one speaker shared a story of a police car following him while he was outdoors wearing binoculars to birdwatch .

“You have to go to such a length so people know you’re out here and not up to anything,” says Connor. “No one should have to explain why they’re existing in a space that they should be allowed to exist in peacefully.”

Since starting the hashtag, Connor says she’s already seen a change in behavior: Allies are less hesitant to speak up in support of Black scientists online.

When Connor reacted to an insensitive comment made about race in a discussion about roundworms that turned into a “Worm War,” non-Black allies rallied to her side. That, she says, was new.

“I didn’t have to worry about the burden being just on me,” she said.

Walker remembers being 10 years old at Adler’s Planetarium in Chicago and learning that because of the change of gravitational pull and her petite size, she’d be weightless on other planets. She was mystified. Now, she’s a NASA summer intern .

Though she still describes herself as “a really tiny person,” the astrochemist and planetary scientist is not shy. For years, she’s been advocating for Black scientists, particularly women, who routinely face racism and discrimination for “walking into a room and being Black.”

Walker says that people make assumptions about her, that she’s “less than,” “subpar,” “angry” and “ghetto,” because she speaks AAVE, African American Vernacular English.

“So oftentimes for me, personally, people often automatically assume (things about me),” she says. Walker hopes that #BlackInAstro week, which showcased a number of astronomers of color, can start to eliminate bias.

Since she started the hashtag in late June, Walker said she has seen progress. Students have reached out to her, saying they plan to follow her example of communicating with faculty members about the struggles BIPOC (Black, Indigenous and people of color) face. Some lauded Walker’s “bravery.”

One of founders: Tanisha Wiliams, 35, postdoctoral fellow in botany at Bucknell University from Washington, D.C.

Growing up, Williams knew of two Black people with a wealth of plant knowledge: George Washington Carver and her great grandmother.

Her great grandmother, Grace Alice Hawkins, “knew the different remedies for medicines that she learned from her grandmother and great grandmother who were slaves and some were Native Americans,” Williams says. “We have this really complex family origin.”

Now, she is trying to raise awareness of her field and the challenges that come with “botanizing” while Black.

During the social media campaign for Black and Indigenous botanists and allies, which launched in early July, she discussed how she’s had great opportunities in her field, like when she built neighborhood gardens with communities in Capetown, and not-so-great experiences, like when she was followed while doing work.

“I make sure that I carry pepper spray,” Williams says. “A lot of people think, ‘Oh, nature. It’s so peaceful,’ which it is. But being a person of color adds an extra layer of weight.”

So has the social media chatter about race and botany challenged stereotypes? Williams says yes: Other botanists are taking note of the need to listen to and connect with botanists of color. At the recent annual Botanical Society of America Conference, organizers added a new event: A BIPOC mixer.

Says Williams, “It was nice to see all of these beautiful Black and brown faces on the Zoom call.”

Powell and Paro were inspired by the #ShareTheMicNow movement, where Black activists took over the Instagram pages of white celebrities, to launch a similar campaign for the medical field.

Paro, who is Hispanic, agreed. “If you, yourself, haven’t experienced (racism), it’s very easy to believe that there’s nothing wrong,” she says.

Powell and other Black physicians had live-streamed conversations about the myriad ways racial bias festers in healthcare, from people always assuming she’s a nurse and being asked to show her ID wherever she goes,  to the reality that Black patients don’t know to seek medical counsel for topics like fertility.

In one particular Instagram Live, Powell and a specialist talked about how Black women are “least likely to receive care for their fertility,” she says. “Black females are just trying to make it and thinking about fertility almost seems like a luxury.”

“After that Live, I got so many messages from women who were like “I’m going to see my doctor and talk to them about my fertility. I didn’t even know it was OK to do this,’” Powell says.

She believes white fertility doctors got something out of the chat, too.

“I think that opened up their eyes a little bit in terms of ‘Why are my Black patients seeing me so late?’ It probably offers another level of compassion for these patients.”

When you think of a scientist, who do you see? Growing up, Dukes only envisioned white men.

“I thought they were all Albert Einstein and Bill Nye,” Dukes, now a PhD student of neurobiology at the University of California Irvine, says. “I never saw a Black scientist.”

As a first-generation American and college student whose parents immigrated from Trinidad and Haiti, Dukes didn’t get much guidance when it came to applying to schools, seeking scholarships and choosing careers.

She wants to make sure other Black students get the mentorship they need when it comes to choosing a career in science, and then pursuing their studies.

“Especially now, in the wake of all of the police brutality and white supremacy, being the only Black person in the lab as everyone seems to go about their days as if everything’s normal (is particularly challenging),” says Dukes.

With #BlackInNeuro week – which launched in late July and was sponsored by a number of science institutions including Stanford Biosciences and Harvard’s Division of Medical Sciences –  the goal was to showcase neuroscientists of color and to foster relationships within the field.

“I just felt like it was really important for us to have a way to highlight ourselves, but also to build a community,” Dukes says.

One of the founders: Devin Swiner, 26, PhD candidate in chemistry and biochemistry at Ohio State, from Prince George’s County, Maryland

Swiner has long had a love of science, and also for lipstick. “I have an affinity for purples,” she says.

That’s how the PhD candidate in chemistry got the nickname “MAC scientist” (referring to the makeup brand), which has become the name of her blog that aims to uplift women of color in STEM fields.

“A lot of times with women that are in science, especially Black women in science, they are pigeonholed,” Swiner says. Through her continued advocacy, and through the forthcoming #BlackInChem week (starts Aug. 10) she co-organized, she wants to challenge that notion.

Wed Aug 5 , 2020
MADRID (Reuters) – Former king Juan Carlos’s sudden exit is only temporary, he told friends from aboard a jet carrying him away from Spain, La Vanguardia newspaper reported on Wednesday, as confusion mounted over the ex-monarch’s plans. “I’m not on holiday and I’m not abandoning Spain. This is just a […] 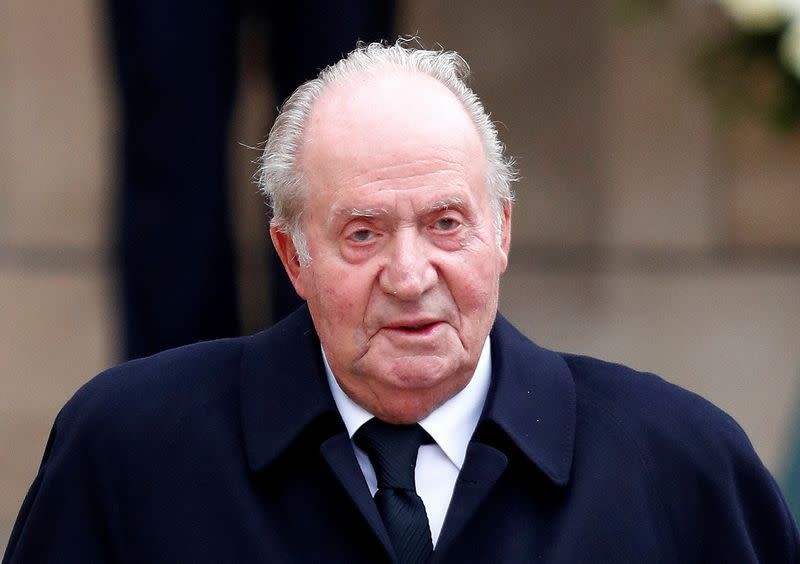