LeBron James had just finished a 30-minute workout and lay on the court wearing sweatpants just a shade darker than the gray in his beard. From a pocket he pulled out a plastic wristband imprinted with a Lakers logo and the outline of Mickey Mouse. It’s called a MagicBand. For […]

LeBron James had just finished a 30-minute workout and lay on the court wearing sweatpants just a shade darker than the gray in his beard. From a pocket he pulled out a plastic wristband imprinted with a Lakers logo and the outline of Mickey Mouse.

It’s called a MagicBand. For tourists visiting Walt Disney World, it is a way to get around, pay for things and get into one’s hotel room. For the inhabitants of the NBA’s “bubble,” it’s one of the keys to keeping them safe from the coronavirus.

The MagicBand also serves as a medical tracker, and players, coaches, reporters, referees and NBA officials alike all must wear them any time they are out of their rooms — that and a mask and a credential, except when playing, coaching or exercising.

Players scan their MagicBand when they leave their hotel, holding it against a sensor that glows green and plays a jaunty tune if the player is safe to proceed. It connects to a daily online questionnaire that asks for COVID-19 symptoms and records temperature and oxygen saturation levels. If anything is amiss — a missed COVID-19 test, no temperature log that day — the sensor turns blue.

James wrapped the band around his wrist and locked it into place. Then he scooted toward his teammates who were warming up for a scrimmage. He wasn’t playing that day and would sit on the bench as the loudest fan in the building. He had to be since outside spectators are forbidden.

The NBA is attempting to finish its season while sequestered at Walt Disney World. The league invited its top 22 teams along with 10 media outlets, including The Times, plus a handful from its broadcast partners to chronicle its experiences in this environment.

It’s an experiment that takes the willingness of the bubble’s inhabitants to submit to stringent protocols, to provide almost invasive amounts of information, and to agree to near-constant surveillance.

Three weeks ago, Richaun Holmes of the Sacramento Kings had barbecue and lemon pepper chicken wings delivered to the Yacht Club resort. It’s one of 33 hotels at Disney World, three of which are housing the teams.

When the driver arrived, Holmes went out to meet him. Once Holmes returned, security gave him the bad news. He’d inadvertently walked off campus and would face a 10-day quarantine.

“I wasn’t really too aware of the borders,” Holmes said. “… They just kind of let me know they wanted to be as safe as possible and had to enforce the rules.”

For 10 days Holmes could not leave his room. Food was brought to him. For workouts, his team sent him an exercise bike and a punching bag.

“I tore that room up,” Holmes said pleasantly after he was released. He seemed to be smiling as he discussed his quarantine workouts, but with a mask it was hard to tell.

(It’s a problem throughout campus, where greetings must be more exaggerated to compensate for half of everyone’s face being hidden.)

Holmes’ chicken incident struck fear into everyone. What if the borders weren’t properly defined? What if, while going for a run around the campus, you stepped out of bounds and had to re-enter quarantine?

Having been confined to my 300-square-foot room for seven days upon my arrival, I had no interest in a second, longer quarantine. Running was out. Sitting by the pool in socially distanced chairs was much safer.

For the first few weeks, this place had a summer camp vibe. Teams began arriving June 7 and their quarantines lasted only 36 hours. There were DJ parties and reunions and video games; players happily displayed the fish they’d caught from a lake full of them.

One pleasant surprise was the opportunity see friends from opposing teams over and over again.

“It’s actually refreshing,” Lakers guard JR Smith said. “Get to see people, get to actually see how people are doing, see how their families are doing.”

The Lakers and Clippers share a hotel, the Gran Destino Tower of the Coronado Springs Resort, with six other elite teams. They have separate meeting and meal rooms, where a server behind a Plexiglass shield takes your plate and loads it up at each buffet-style station. But the teams share other common areas, such as hotel restaurants.

Like Smith, Toronto coach Nick Nurse appreciates being able to see friends so frequently. Usually, the blur of constant travel makes contact difficult. “Now you’re bumping into them every time you turn around,” Nurse said about an hour before the Lakers played the Raptors.

The Raptors were the designated home team. During the fourth quarter, James hit back-to-back three-pointers and glared into what normally would be the opposing team’s crowd. Instead, his eyes darted around as he looked upon just a handful of socially distanced people.

“I was trying to put myself in a road environment,” James said. “This was the Raptors’ home game. So taking and making big shots on the road floor is something that I relish.”

Serious work was being done in the bubble too. Seventy-five percent of the NBA’s players are Black and they didn’t want to lose the momentum that had built around the demands of protesters and social justice advocates to end racism in America.

In the weeks before the games restarted, players used news conferences to discuss Breonna Taylor, a 26-year-old emergency medical technician who was killed in her home by police in Louisville, Ky. It was not a coincidence — they’d talked about doing this as a group. Some players participated in a video conference with Taylor’s mother.

Players decided as a group that they would kneel during the national anthem, adopting the protest against racism and police brutality started by former NFL quarterback Colin Kaepernick.

“I hope we continue to make Kap proud,” James said.

Only five of the 22 teams in the bubble have Black head coaches, but their white counterparts have been vocal allies inside the bubble. The coaches have worked with Bryan Stevenson of the Equal Justice Initiative to learn more about issues of racism. They’ve all worn pinsthat say “coaches for racial justice.”

“I just think this is not a time to be neutral,” Orlando coach Steve Clifford said. “Everybody has to make a decision about ‘do I want to be part of trying to change this and make it better or not?’”

Major League Baseball opted to not play in a bubble and, with its players given more freedom away from the ballpark, already has suffered a couple of coronavirus outbreaks. So far the bubble environments have worked for the NBA, the WNBA and Major League Soccer, which is sequestered in a different part of Disney World.

The NBA has not announced a positive test among players since July 13 and before that, only two players who entered the bubble tested positive out of nearly 350.

Everybody living here and workers who don’t must be tested every day. Bus drivers who shuttle people between the residences and games post signs that announce, “I’ve been tested daily!” It is up to each person to remember to do it — a skipped test results in a warning or sometimes a quick quarantine.

There are questions about just how long this will work. Like anyone, players miss their families, friends and pets.

Brook Lopez, a center for the Milwaukee Bucks, joked that he considered sneaking his cat, Poupin, into the bubble. Lopez’s devotion can’t be understated. When he played for the Lakers, he hired a car service to ferry Poupin (pronounced like the mustard Grey Poupon) from Los Angeles to Fresno, where his mom lives, when his neighborhood was evacuated due to the Skirball fire.

Children are a bit more complicated. Families aren’t allowed to visit yet, and some players’ kids — angry, sad or confused to see their fathers leave after months at home — ask during check-in calls when dad is coming home.

Their coaches can empathize. Brooklyn coach Jacques Vaughn has carried a small bamboo plant with him to practices and games as a metaphor for how they must face the challenge of the bubble.

“We’re going to have to be extremely flexible, adaptable and resilient,” Vaughn said. The bamboo is all those things.

Flexibility is a trait NBA families must have anyway, but the bubble tests it even more.

The Clippers have had four players leave the bubble or arrive late because of the deaths of loved ones.

“Guys have life going on,” Clippers coach Doc Rivers said. “Whether it be a family problem, a kid problem, a wife problem or anything. There’s issues that come in these guys’ lives. We give guys days off all the time but no one really notices.”

Here, though, tending to a family emergency means leaving the bubble, whose rules don’t allow for a quick departure and return.

My hamlet in this world is on the edge of the bubble.

Twice I’ve walked out of my room without my MagicBand and had to sit at my door until a kind hotel employee wandered by and let me into my room.

Our hotel shares a lobby and a gift shop with the Gran Destino, but reporters aren’t allowed into either. We can go to the mail room, a cavernous warehouse filled with dozens of palettes loaded with water bottles and Gatorade. Deliveries here have included couches, refrigerators and arcade games. And wine. Lots of wine.

After three weeks of reporters being confined to the hotel, practice spaces and arenas, the NBA opened a few activities to them. Three of us booked a pontoon ride and we celebrated like it was a trip to Rome.

“The only thing that’s hard is being away from your loved ones,” said Rob Pelinka, the Lakers general manager and vice president of basketball operations.

One night Jayson Tatum, a forward for the Boston Celtics, read a book to his 2-year-old son, Deuce, on FaceTime. “He was excited to see that his dad had [the same] book that he had for his nightly routine,” Tatum said.

Deuce’s mother sent copies of five of Deuce’s favorite books into the bubble. Tatum couldn’t recall all the titles, but one did stand out: “Daddy Loves You.”

Tue Aug 11 , 2020
From Autoweek Lucid, one of the few electric car makers that looks like it’ll actually produce an electric car, announced this morning that it expects to get a range of 517 miles when the EPA certifies the range of its luxury car later this year. 517! That is way more […] 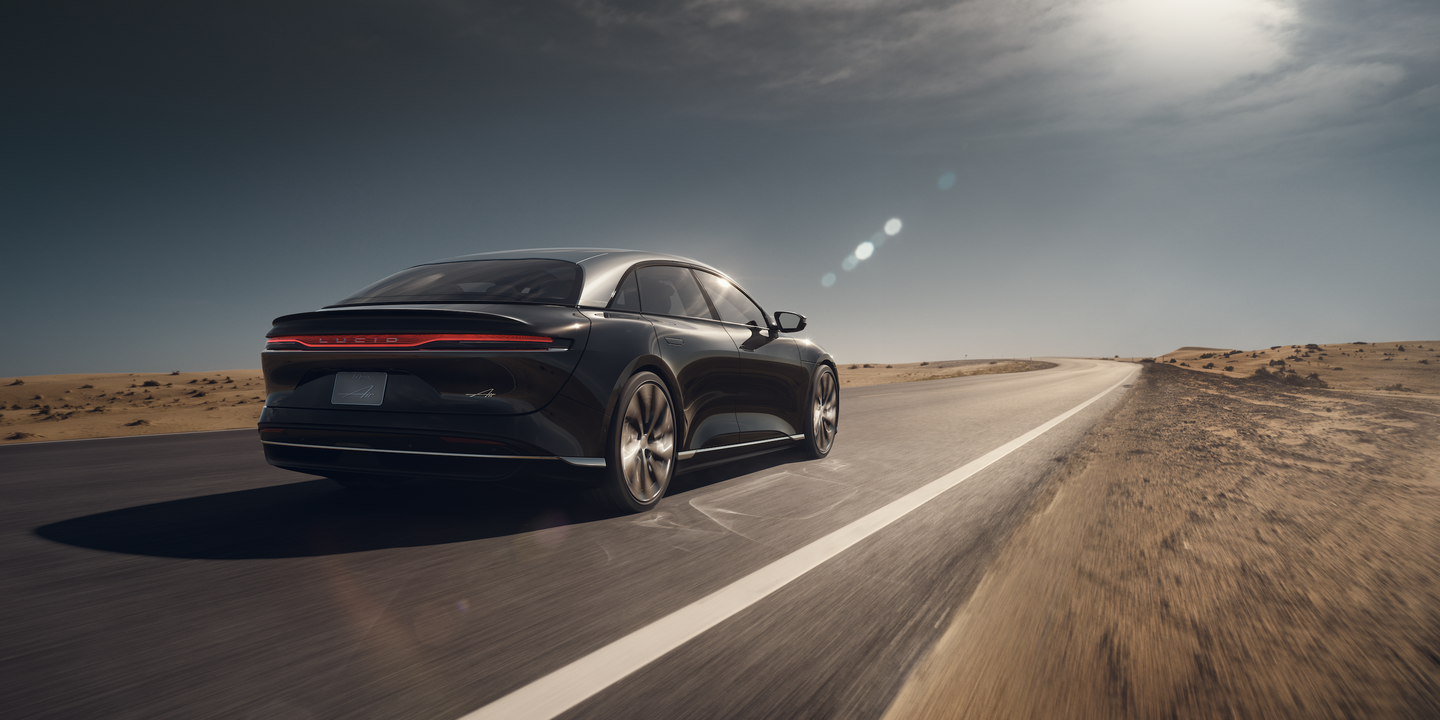