“Beat it, little f***er,” Detective Zachary Baro, leader of a Fort Lauderdale SWAT team unit, can be heard saying after officers shot “less lethal” projectiles at a protester. The protester was walking away after tossing a tear gas canister back at the line of police.

A few minutes later, another officer, Jamie Chatman, came up to Baro behind the police line and asked if his body camera was off. Baro replied — incorrectly — that his camera was in “stand-by” mode and not recording. The two officers then began laughing and joking about the people they had shot with rubber bullets.

“I got the one f***er,” the other replied amid laughter.

George Kirkham, a former police officer and professor emeritus at Florida State University, condemned the behavior captured on the footage.

“This is serious misconduct. This is people with badges acting like thugs,” Kirkham said. “It’s like a cancer. If you let it go, it will spread.”

Asked for comment, a spokeswoman for the Fort Lauderdale police said the department would have to review the footage.

After publication online, Fort Lauderdale Police Chief Rick Maglione said in a statement: “Your story shows less than 3 minutes of an 8 minute and 43 second long video. The entire video clearly demonstrates our officers were under attack by a group of people who chose to use violence instead of peace to antagonize the situation. Although the language is extreme, and offensive to some, our officers were dealing with the chaos of a developing situation.“

Maglione did not respond to questions about whether Baro and Chatman had been placed under internal investigation or removed from duty.

The officers’ conduct was revealed in hours of footage provided by the Fort Lauderdale Police Department in response to a Miami Herald public records request. The footage bolsters protesters’ accounts that police aggression sparked the first documented confrontation between police and protesters.

Marchers hurled plastic water bottles after Officer Steven Pohorence rushed into a crowd of protesters and pushed a kneeling woman in the head. Police responded with a round of tear gas. Still, body camera footage shows that even after that, protesters quickly moved to reestablish peace.

“Please I am begging you, we’re peaceful,” one man can be heard yelling.

“Do you see this?” another man asked to the line of riot police pointing to the protesters taking a knee in the street. “We are going to stop this. We are going to be the generation that brings peace.”

After a few tense minutes, video shows police started to throw tear gas at the group again. Within 15 minutes of Pohorence shoving the woman, Baro had emptied his six-chamber rubber bullet launcher and had to reload, he can be heard saying in his body camera video. (Pohorence was charged with misdemeanor battery on Tuesday.)

“If you need it, give me a target,” Baro yelled to other officers from behind the line of police.

The comment stuck out to Robert Drago, a retired lieutenant colonel at the Broward Sheriff’s Office, who reviewed the footage.

“If you’re not seeing a threat, why are you asking for a threat?” Drago said. “That would almost lead you to believe that they were indiscriminately firing.”

Baro said in his incident report that he was firing rubber bullets at protesters throwing tear gas canisters and other objects.

“In an effort to stop officers and innocent people from being hurt, I targeted these violent subjects with my 40mm less lethal launcher,” Baro wrote. “I deployed less lethal rounds targeting lower abdomen and the large muscle groups of the legs in an effort to deter their violent actions.”

In the report, Baro does not record his comments to other officers. He does say that he was struck in his left thigh by a rock “about the size of my fist” and that he saw protesters throwing “rocks, fireworks, smoke bombs, and water bottles containing an unknown yellowish liquid.”

Chatman said he was struck by a half-stick of dynamite, according to his incident report. Video shows an explosive blowing up at officers’ feet. His report does not indicate that he was injured.

Kirkham said internal affairs should investigate the conduct of Baro and other officers in the video, particularly given his position as a SWAT team leader.

“I understand what it’s like to have that adrenaline. I’ve been in a riot situation,” Kirkham said. “But that does not excuse that kind of verbiage and behavior. It suggests that the police think they can do whatever they want and get away with it.”

“It’s unprofessional. They shouldn’t be laughing and joking about shooting and potentially hurting people,” said Philip Sweeting, former deputy chief of police in Boca Raton. “It reinforces the public’s distrust of the police. It shouldn’t be tolerated.”

Drago also criticized the behavior of Chatman, the officer who asked Baro if his body camera was off.

“It shows intent and then he makes inappropriate, unprofessional statements,” said Drago. “It’s not a carnival. This isn’t hit-three-times-and-get-a-stuffed-animal. It doesn’t seem like these officers had public safety in mind at all.”

Christina Currie, an attorney and chair of the Fort Lauderdale Citizens’ Police Review Board, said Chatman asking if the body camera was off posed a “grave concern.”

“It was pretty obvious the officers were comfortable about talking about turning the camera off,” Currie said. “It didn’t feel like the officer wearing the camera felt shocked about hearing that question. There need to be clearly articulated consequences for violations.”

Fort Lauderdale police policy on body cameras states that: “Once the [camera] is activated to record an interaction, it shall remain on until the event has ended.”

City Manager Chris Lagerbloom said in a statement that he was “troubled” by the footage uncovered by the Herald.

“While I am a huge supporter of the hard work of our police force, I would not want the actions of a few to taint the public’s perception of the dedication and professionalism of the Department as a whole,” Lagerbloom said. “I can understand the intensity of the moment captured on body camera footage as the officers were clearly under attack. … The language the officers used, and sentiment expressed is not consistent with what the public expects from our police force.”

He said he had asked the chief to “look into the matter.”

As the clash intensified and police tossed gas, small groups of protesters retaliated: first with plastic bottles, then by tossing tear gas canisters back at police, and finally with fireworks and rocks. Officers said in their reports that those agitators then used peaceful protesters as human shields.

Outside the parking garage at Southeast First Avenue and Second Street, officers shot dozens of rubber bullets and tossed tear gas at kneeling protesters, including LaToya Ratlieff, a non-profit grant writer, who testified before a congressional subcommittee on Monday. Detective Eliezer Ramos shot Ratlieff in the face with a rubber bullet while she was peacefully demonstrating. She suffered a fractured eye socket.

While Ramos said in his official report that he was aiming for someone behind Ratlieff who had been throwing tear gas canisters, footage taken from various angles shows a cloud of tear gas so thick it’s impossible to make out anything happening behind Ratlieff. (Footage from Ramos’ body camera started after he shot Ratlieff. )

After Ratlieff was shot, protesters returned to the intersection chanting “Hands up! Don’t Shoot!”

Police maintain it was the protesters who started the violence by jumping on an unmarked police vehicle stationed at the mouth of a public parking garage around 6:50 p.m. Officer Stylianee Hayes, who was driving the black 2019 Toyota Camry, felt her “life was in imminent danger,” according to her official incident report. She said she was so worried for her safety that she did not turn on her body camera.

“She came over the radio screaming for help. She was being surrounded,” Maglione, the chief, told the Herald a few days after the incident.

A nearby officer on a motorcycle who was present at the moment Hayes called for help did not make an emergency call of his own. None of the hours of body camera footage released by police, nor the more than 100 photos and videos taken by photographers on the scene and reviewed by the Herald, show anyone touching Hayes’ vehicle. Nor was Hayes’ 6:51 p.m. call for backup the emergency distress call of a terrified officer described by Maglione and dozens of officers in sworn incident reports.

“Send me a few more units please, they’re starting to surround my car,” Hayes said, according to a BSO recording of her dispatch. A few moments later she repeated the request: “They’re jumping on my car. Send me units.”

Dozens of nearby officers responded. Footage suggests a few arrived on the scene in time to see Pohorence get pelted with water bottles, but not in time to see what set the protesters off. Police thought they were responding to a violent “mob,” according to their reports.

The footage did not show a force that was well-prepared.

In his report, Baro did not mention the fact that his gas mask was leaking early on during the clash, likely impairing his vision. He can be heard sniffing and repeatedly cursing in the footage, as another officer helps him adjust the mask. “Your whole mask is f***ed up, dude,” the second officer says. “It’s getting on your head backwards.”

Baro wasn’t the only one having trouble.

“This sh** ain’t doing sh**. It’s in my eyes,” said another officer fumbling with his gas mask on video. Another officer burned her fingers as she tried to move a smoking canister with her hand.

Thu Jul 2 , 2020
Sitanan Satsaksit was on the phone to her brother early in the evening on 4 June when he told her to hold the line. Wanchalearm, also known as Tar, was handing over a few dollars for meatballs at a stall opposite his home in the Cambodian capital, Phnom Penh. Then […] 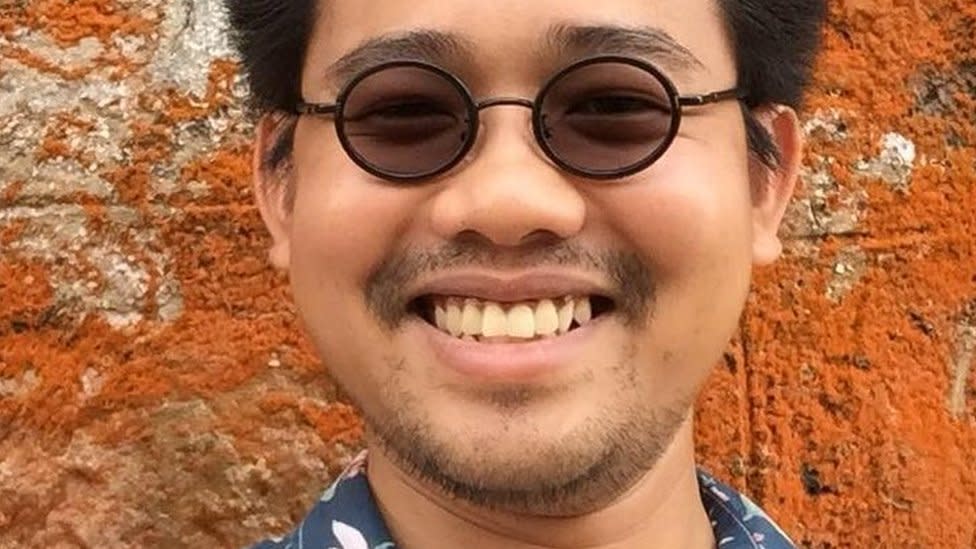