Amid the market’s wild roller coaster ride, one fact has become abundantly clear: COVID-19 is a game-changer. With the number of new cases spiking, the resumption of normality is fading farther off into the distance, taking hopes of a V-shaped recovery along with it. That said, regardless of the recovery’s […]

Amid the market’s wild roller coaster ride, one fact has become abundantly clear: COVID-19 is a game-changer. With the number of new cases spiking, the resumption of normality is fading farther off into the distance, taking hopes of a V-shaped recovery along with it. That said, regardless of the recovery’s shape, some argue that the investing landscape has been altered for the foreseeable future.

Against this backdrop, investment strategies will need to take the new reality into consideration, focusing on the names poised to emerge from the crisis as the ultimate winners. Even though this might feel like guesswork, the Street’s pros can help steer investors in the right direction.

To this end, we used TipRanks’ database to get all the details on three Buy-rated stocks flagged by analysts as positioned for gains in a post-COVID environment.

As one of the top providers of networking and communications equipment, Adtran helps communications services companies manage and scale services that connect people from all over the world. With COVID-19 making residential broadband access a necessity, some analysts see this name as a key beneficiary of the global pandemic.

MKM Partners’ Michael Genovese reminds investors that during the firm’s virtual idea dinner on March 14, he laid out the case for ADTN, with COVID-19’s impact only supporting his belief that the stock is a top pick. “In our view, the Adtran story has gotten even better post COVID-19 since home Broadband has gone up in importance. We believe Internet 3.0, with a good portion of human work and social life occurring online, is here to stay. We see a renewed Telco focus on Wireline and on the Edge of the network where Adtran plays,” he commented.

When it comes to its Fiber products, the last few years have seen the company place a significant focus on this aspect of the business, with it revamping its PON capabilities and offering Fiber platforms with innovative SDN and Cloud features.

According to Genovese, these efforts have already paid off. “Over the past year, Adtran has successfully transitioned its largest copper customers, CenturyLink and DT (DTE), into large fiber customers. Adtran’s 1Q20 its Fiber revenues were up 26% year-over-year. Last month, ADTN announced a win with DT to add significantly more Fiber over the next several years,” the analyst stated.

Adding to the good news, the company revealed BT Openreach had chosen it to help it make multi-gigabit services available to 20 million homes in the UK. It should be noted that in the UK, Huawei equipment can only account for 35% of the Broadband Access network. As Genovese points out, to limit its use of Huawei products, BT has turned to other providers like ADTN.

“According to our checks, Adtran could see more than $10 million in sales from BT Openreach in 2Q20. We believe the contract with BT is long-term and worth hundreds of millions of dollars over time. Adtran also recently revealed a Fiber win with a U.S. Tier 1 we think it is Verizon, with revenues expected to ramp in 2021,” Genovese explained.

Given the fact that the Tier 3 market is stronger than it has ever been and that the stock is trading at an attractive level, the deal is sealed for Genovese. As a result, the four-star analyst maintained a Buy rating and $16 price target. This figure puts the upside potential at 50%. (To watch Genovese’s track record, click here)

Turning now to the rest of the Street, opinions are split almost evenly. 3 Buys and 2 Holds add up to a Moderate Buy consensus rating. At $14, the average price target brings the upside potential to 30%. (See Adtran stock analysis on TipRanks)

Next up we have Sirius XM Holdings, a leading audio entertainment company that offers a platform for subscription and digital advertising-supported audio products. While shares have underperformed the broader market since February 19, several factors could help SIRI take off post-pandemic.

Citing recent comments from CFO David Frear as well as an improved outlook for new car sales in the U.S., J.P. Morgan analyst Sebastiano Petti sees SIRI’s long-term growth prospects as being even stronger. “We are increasingly bullish on the fundamentals of the legacy SIRI business as auto sales improve from April’s trough and churn/conversion rates come in better than initially expected exiting 1Q,” he explained. The above also supported the firm’s decision to make it the top pick in June’s Spectrum of Opportunity report.

All of the above prompted Petti to bump up his estimate for EBITDA by 3%, with the figure now landing at $603 million. On top of this, the analyst also trimmed his call for 2020 SIRI self-pay net losses to 925,000, from the previous estimate of -1.11 million. What drove this revision? Better-than-expected new and used auto sales in the second quarter.

“We see potential upside to our 2020 self-pay net add estimate given the likelihood for 2020 SAAR over 12.5 million following May’s better than expected results, continued dealership re-openings, and pickup in economic activity. In mid-May, SIRI’s CFO noted that new car sales were 35% below the prior year with used car sales trending ~20% lower year-over-year – better than declines of 55-60% at the time of 1Q earnings. Consistent with management commentary at the JPM TMC conference, we now look for better churn and conversion rates in 2020 with the former benefitting from a sharp decline in vehicle related churn,” Petti added.

Unsurprisingly, Petti continues to give SIRI his stamp of approval. Along with an Overweight rating, he keeps the price target at $7. Should the target be met, a twelve-month gain of 19% could be in store. (To watch Petti’s track record, click here)

Looking at the consensus breakdown, 5 Buys, 3 Holds and 1 Sell have been issued in the last three months. This means that SIRI gets a Moderate Buy consensus rating. Based on the $6.51 average price target, shares could surge 11% in the next year. (See Sirius XM stock analysis on TipRanks)

Focused on developing and manufacturing therapies derived from mammalian cell culture, Avid Bioservices wants to help improve the lives of patients. Despite the fact that some healthcare names have experienced major COVID-related disruptions, the pandemic has actually created opportunities for this company.

After a recent conference call, Craig-Hallum’s Matt Hewitt tells clients that “Avid Bioservices is the top name that we would be buying.” The four-star analyst points out that while there was an equipment issue in the previous quarter, this has been addressed, with the piece of equipment now running properly again.

Most important, however, is the increased demand the company is witnessing thanks to COVID-19. “While some pharma/biotech companies have delayed clinical trials, this hasn’t affected any of the products that Avid manufactures, with some customers actually requesting a greater amount of material. Additionally, Avid has increased its inventory of key inputs, helping to minimize supply disruption,” Hewitt explained.

It should also be noted that prior to the pandemic’s onset, capacity was tight, so customers may want to take care of this sooner, something that stands to benefit CDMO’s backlog, in Hewitt’s opinion. “There may also be an opportunity for the company to produce treatments or vaccines for the coronavirus, as long as they are antibody-based (not viral vector-based),” the analyst added.

On top of this, in May, the company broke the news of its partnership with Aragen Bioscience. The collaboration enables CDMO to offer customers Aragen’s cell line development expertise, while Aragen is able to direct customers to Avid for their process development and manufacturing requirements.

Weighing in on the implications, Hewitt stated, “While this announcement may have been ignored by many investors, we view it as a key addition to the company’s platform… As several other CDMOs offer cell line development services (Catalent launched a new technology back in November), we believe this partnership helps fill a key gap in Avid’s service offerings, with cross-sales already beginning to take place. Longer term, we see the potential for more partnerships like this to be signed, particularly for finished dose manufacturing.”

According to Hewitt, the growing demand also means that CDMO could expand its manufacturing capacity sooner than he originally expected. It also doesn’t hurt that its CEO search is set to wrap up soon, with the appointment potentially acting as a catalyst for shares.

In line with his bullish take, Hewitt reiterated a Buy rating and $10 price target. This target conveys his confidence in CDMO’s ability to climb 40% higher in the next twelve months. (To watch Hewitt’s track record, click here)

Thu Jul 2 , 2020
Lost Corvettes Brittany Chang/Business Insider A historic collection of 36 classic Corvettes saved from dilapidation after being hidden underground in a Manhattan garage for decades will soon be given away in a nationwide sweepstakes.  Corvette Heroes is hosting The Lost Corvettes sweepstakes that will be giving away the cars that […] 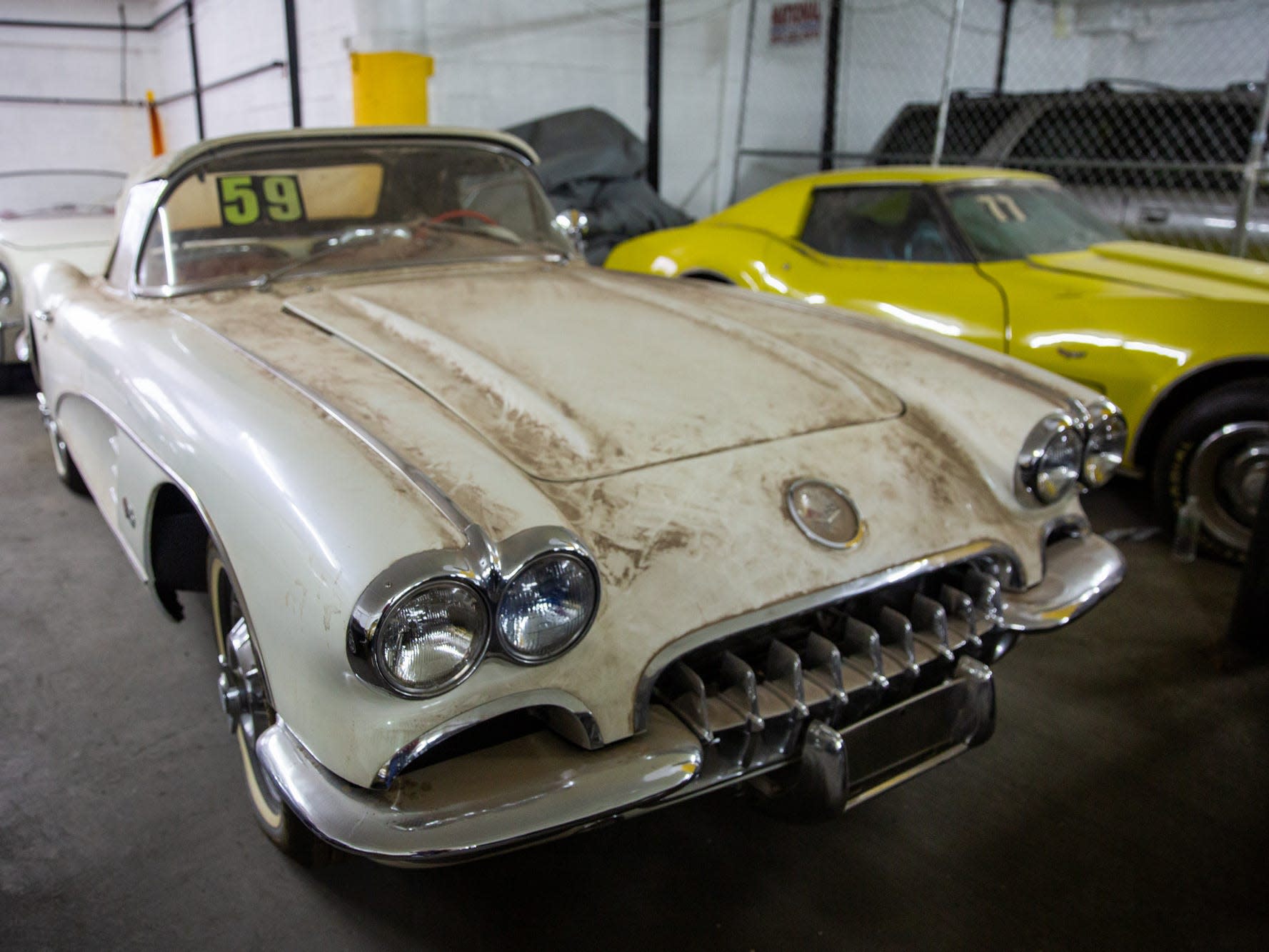