The Twin Cities are bursting with political yard signs. They’re not campaign signs — those are tellingly few. I’ve seen more faded blue holdovers from 2016 than support for presumptive Democratic nominee Joe Biden or President Trump. No, the signs dotting my neighborhood and absolutely swarming the next neighborhood over […]

The Twin Cities are bursting with political yard signs.

They’re not campaign signs — those are tellingly few. I’ve seen more faded blue holdovers from 2016 than support for presumptive Democratic nominee Joe Biden or President Trump. No, the signs dotting my neighborhood and absolutely swarming the next neighborhood over aren’t about voting, per se. They’re about policy, principles, identity, and they’re almost entirely left-wing. While I’ve never been fond of the phrase “virtue signaling” — its contempt is often unfair — used literally, it’s an apt description of what’s happening in our metro’s front yards.

I decorated my college-era car with bumper stickers, but when that car died, my political signage impulse went with it. Though hardly shy about my views, I’ve never considered a yard sign. The people around me may have very different politics from mine, and I worry this sort of impersonal political engagement might get in the way of our neighborliness.

But clearly many of my neighbors don’t share my qualms. As signs multiplied in recent months, I began wondering four things: Is this only a local trend? Where did the most popular sign originate? Is there a right-of-center analogue? And what’s the thought process behind putting such signs in your yard — which is to say, what does this phenomenon tell us about the state of our country?

The current batch of signs, it should be noted, is not the Twin Cities’ first. When I moved here in 2013, mere days after Minnesota began issuing same-sex marriage licenses, rainbow signs were in vogue. “All are welcome here,” or, “Love is love,” they said.

Once Trump was elected, attention shifted to immigration and refugee policy, and a new sign appeared. In English, Spanish, and Arabic, it announced: “No matter where you are from, we’re glad you’re our neighbor.” An NPR story from the time reported this sign was popping up nationwide, often distributed by churches. Smaller political moments and holidays occasioned other signs, too. The death of Philando Castile at the hands of police in a nearby suburb was followed by a slew of “Black Lives Matter” and “Justice for Philando” signs. “Blessed Ramadan” signs (used by non-Muslims) are a seasonal option. I think there’s a Christmas one, but I can’t quite remember it now.

Yet none of these have replicated the popularity of the sign du jour: “In this house, we believe…”

This sign is everywhere. In predominantly white, progressive, upper- or middle-class neighborhoods, it’s rare to find a block without one — or five. (Anecdotally, though I’m not the only one to make this observation, I’ve never seen “In this house” at a home I know to be occupied by people of color. My majority-minority neighborhood, with a large population of first-generation immigrants, has markedly fewer signs than the mostly white neighborhood to the west.) When a red, white, and blue version appeared, as if on cue, for the Fourth of July, I briefly considered there might be a subscription service which everyone knew about but me.

What I find fascinating about “In this house,” beyond its ubiquity, is that it’s functionally a creed, a dense statement of political and even metaphysical belief.

Every line has a major dogma in view, and to correctly interpret the entire statement requires a high degree of political knowledge, just as something like the Apostle’s Creed points Christians to larger theological doctrines. The commentary about climate change, evolution, and/or vaccines intended by “Science is real,” for example, cannot be gleaned from the text itself. “Women’s rights are human rights” does not mention abortion or suffrage or sexual assault, though it certainly seems intended to address all three.

By creedal standards, this is one for the true believers, and, like religious creeds, it is a complete package of orthodoxy to be received, not dissected. There are no political “Protestants” among yard signers. No one displays an “In this house” sign with half the list struck out. If you’re in, you’re all in.

Back to my four questions.

The first was the most easily answered: “In this house” (and similar signage) has gone nationwide. An informal poll I conducted with friends around the country returned reports of the same sign proliferating in Austin, Los Angeles, Chicago, Indianapolis, Boise, Santa Fe, Richmond, Charlottesville, Pittsburgh, Baltimore, and many smaller cities, towns, and suburbs. The only friend who said she hadn’t seen “In this house” lives in Lynchburg, Virginia, home of Liberty University and located in a county that voted 71 percent for Trump in 2016.

The sign’s origin story was easily discovered, too. Written by a woman in Madison, Wisconsin, for her own yard, the design with colorful typography went viral in the “Pantsuit Nation” Facebook group following Trump’s victory. Now there are cross-stitch versions, poster versions, shiplap versions, and pandemic face shield versions. (The format has also been co-opted by Disney and Harry Potter fandoms, naturally.) A business in Portland offers “In this house” as a flagship product among a full slate of “signs for justice.”

The right-wing analogue question is more difficult to settle. Friends in Virginia and Texas reported seeing a few “Back the Blue” signs in politically mixed suburban and bedroom communities. There are conservative variants of “In this house” available online, but they’re rare in real life:

When Republicans want to announce their politics, they seem to prefer bumper stickers over yard signs; campaign signs over broader political statements; and, sometimes, a certain ambiguity over precise messaging. The American flag, which these days can equally communicate generic patriotism or a patriotically correct slam on the Black Lives Matter movement, is a favorite.

That apparent interest in ambiguity (deniability?) was on my mind when I read the results of a Cato Institute/YouGov survey published last week. The poll found a growing majority of Americans across party lines have political views they are afraid to share because of the reaction they anticipate from those who disagree. Though fear of political backlash is rising across the board, the further someone moves to the right, the more likely she is to self-censor.

A quarter of Democrats at all levels of education worry they could lose their jobs over their politics, the survey found, but fully 60 percent of high-education Republicans — those in the professional-managerial class — think their politics could “harm them at work.” The same poll shows that fear is not unfounded: A third of “strong conservatives” support firing business executives who donate to Biden, and 50 percent of “strong liberals” would do the same with Trump. The desire to punish and insulate oneself from political difference isn’t universal in America, but it’s certainly mainstream, particularly on the left.

Perhaps predictably, as likely all my conversation partners would fall into the survey’s “strong liberal” category, this fear was not much in evidence when I interviewed a handful of Twin Cities residents and an online acquaintance from Ohio about their display of “In this house” or signage like it. On the contrary, several expressed a sense of relief in having few or no known conservatives in their social circles who might take umbrage with their signs.

“I’m lucky,” said Chelsea, who lives in Saint Paul. “I don’t have a large family I feel the need to mollify, [and] I work in a progressive company.” She doesn’t invite anyone to her house who doesn’t affirm her signs’ doctrines, Chelsea told me, describing this as a matter of “fundamental morality,” not mere politics. “We live in a bubble,” said another Saint Paulite, Laurie. “It is unlikely that visitors to our house will disagree with our signs.”

Why display them? The universal reason was virtue signaling in that literal sense. Laurie’s next-door neighbors are refugees, she said, and “we wanted to signal to them that we were welcoming.” Chelsea’s family, too, wanted to “identify ourselves as friendly and safe” while sending a message to “people who may not be sympathetic that this neighborhood will stand up for people who need it.” She recounted overhearing passersby cite her sign as evidence that “this neighborhood is nice people.” Another neighbor, Tiffany, had her family and students of color in mind, while George in Ohio displayed “In this house” because “those with differing political or societal views aren’t always welcomed with open arms,” and a sign struck him as a good, pandemic-friendly option to say otherwise.

Every person I spoke with said they expect to keep their signs up long-term. Biden’s election will not make them feel less necessary. They would only come down after massive societal change, which seems to mean after those “people who may not be sympathetic” are either converted to the creed, rendered politically powerless, or die off.

Is that mindset meaningfully different from ordinary politics? After all, every political movement seeks victory. Adherents of every political ideology want to grow their ranks. Every political party tries to take power from its opponents. And the signaling of yard signers seems sincerely intended to be virtuous — George, a Lutheran Christian, called his sign a “theologically-driven” effort to love his neighbors well. These are not Václav Havel’s greengrocer, submissively putting up signs reflecting the dominant political ideology because if they “were to refuse, there could be trouble.”

Maybe I’m still uneasy about these signs because I’m simply not a “sign person.” Temperament may be coloring my judgment here. But I don’t think that’s all it is. Regardless of the intent and content of the messaging displayed, I find something troubling, disordered even, in a society so fixated on politics and signification of political loyalties.

Signs often serve as a warning to some as much as a welcome to others. They can become one more means of isolating ourselves from those who think differently in our homes, our relationships, and, of late, our workplaces. They can serve as an announcement that we are not the wicked to be disavowed and deplored, though of course we know (or should know) that line of division is not so neatly drawn; it does not skirt the perimeters of our hearts.

And the parable of the greengrocer reminds me that a wholesome political society — unlike the totalitarianism of which Havel wrote — does not expect its citizens to thus advertise their politics. In our recent history, heavy political signage has not corresponded with political health.

“Just so,” sign owners could retort, “and our signs look forward to a day when signs are unnecessary.” Perhaps, but I worry about how we’ll get there. Whatever their meaning and motive, signs strike me as an escalatory move, and I don’t know how much more escalation we can take.

More stories from theweek.com
New Lincoln Project video imagines what it’s like to wake up from a coma in 2020
Now a Category 1 hurricane, Isaias approaches the Bahamas
Conservative propaganda has crippled the U.S. coronavirus response

What We Know About Fort Hood Soldier Vanessa Guillen’s Highly Suspicious Death and Disappearance From a U.S. Army Base

Fri Jul 31 , 2020
Photo credit: U.S. Army From Seventeen Vanessa Guillen, a 20-year-old Private First Class (PFC) soldier for the United States Army, disappeared on April 22 at Texas’s Fort Hood Army base. She was later found dead. Guillen’s family believes officials at Fort Hood are covering up what happened to her. A […] 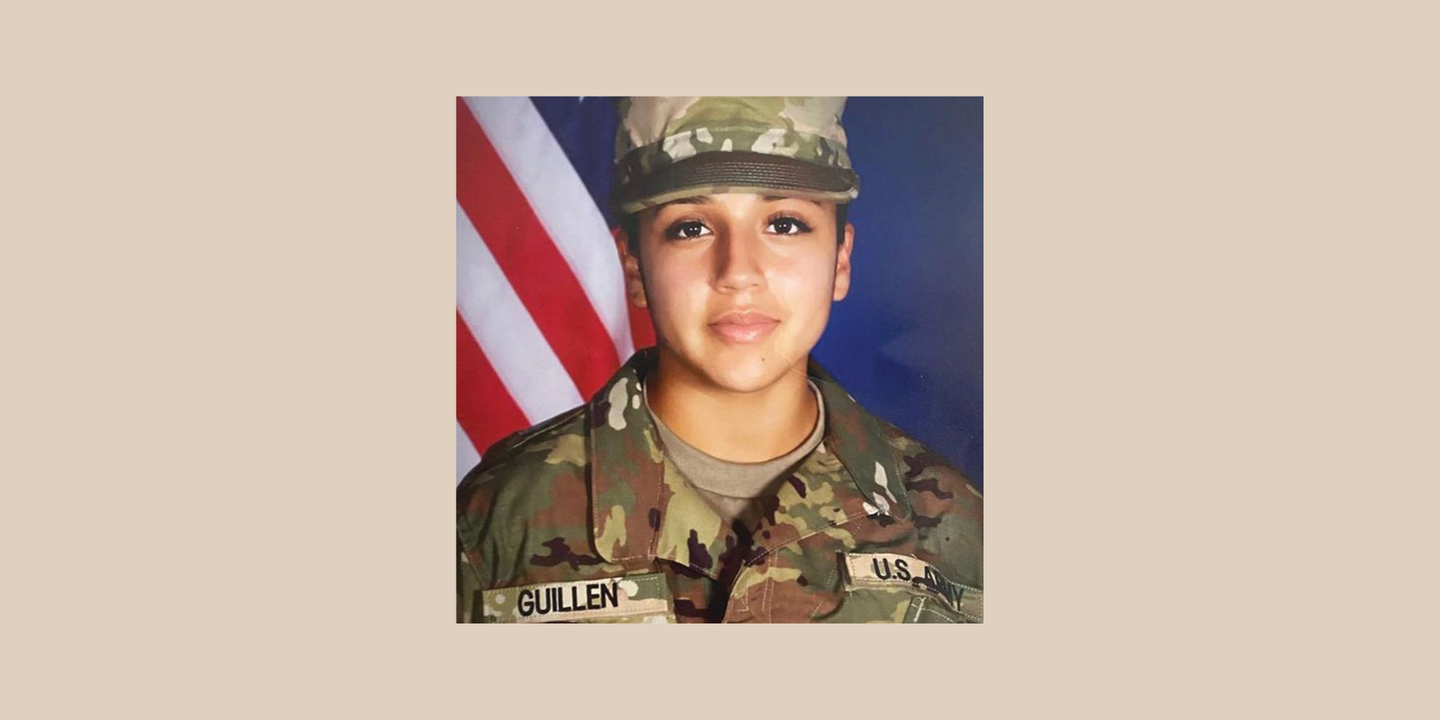