Developer and art collector Martin Margulies’ foundation has announced it will make a significant gift to help artists weather the impact of the COVID-19 pandemic. Margulies will donate 400 works of art from his extensive collection to national nonprofit organizations that support working artists but have seen donations shrink because […]

Developer and art collector Martin Margulies’ foundation has announced it will make a significant gift to help artists weather the impact of the COVID-19 pandemic.

Margulies will donate 400 works of art from his extensive collection to national nonprofit organizations that support working artists but have seen donations shrink because of the pandemic. The organizations, which have not yet been identified publicly, can then sell or auction off the pieces to promote, exhibit or otherwise support the artists with whom they work.

The effort will focus on organizations that have been hit the hardest financially, the foundation said.

“These 400 works have been assembled from the early years of my collecting activities,” Margulies said in a statement released by the foundation. “We are happy to be of some help to artists who do not have dealers and need support at this time. All proceeds from the sale of these artworks will go to help artists.”

Margulies organizes exhibitions from his renown collection at a vast Wynwood warehouse he retrofitted three decades ago. The Margulies Collection, which has been closed because of the pandemic, said it is readying exhibitions for next season and plans to reopen to the public this fall.

A national arts group will use a $250,000 gift from developer and arts patron Jorge Pérez’s family foundation to establish a unique award to benefit people working in the field of public art.

Americans for the Arts said the Jorge and Darlene Pérez Prize in Public Art & Civic Design will be awarded annually to an artist, a public-art administrator or a civic designer working to incorporate art into public places and spaces across the country. The group said it’s the first award of its kind.

The award will consist of a grant package worth over $50,000, including a cash stipend, financial support for continued learning and discussion about their work with national leaders in the arts and allied fields. The winner will be announced during the 2020 Miami Art Week in early December.

Applicants can take a pre-assessment to determine eligibility and apply by visiting Americans for the Arts’ application page at americansforthearts.

This year’s application deadline is August 14. A selection committee composed of representatives from Americans for the Arts, The Jorge M. Pérez Family Foundation, the Public Art Network Advisory Council and other outside representation will pick the winner.

Miami’s billionaire “condo king” has increasingly turned to philanthropy as he reduces his day-to-day role at The Related Group, which he co-founded. In March, he donated a dozen works by Latin American and U.S. Latino artists to the Museo Nacional Centro de Arte Reina Sofia in Madrid, along with a $500,000 cash gift to be used by its curators to acquire additional works by Hispanic or Latino artists.

Last year, Pérez announced an annual program of $1 million in grants to visual arts groups in Miami, a pair of new annual art prizes and a $1 million gift to benefit 20 local non-profit groups focused on culture and the arts.

He also inaugurated a new private exhibition space in Miami’s Allapattah neighborhood, Espacio 23, to showcase his art collection. The Pérez Art Museum Miami, or PAMM, was named for him after he made a substantial donation of art and cash.

While most local museums remain closed, some galleries and art spaces are coming back to public life. Others are staging virtual showcases, talks and auctions. Here are a few of the options on tap:

▪ July 8: Just an hour later, at 7 p.m., the Museum of Contemporary Art – North Miami hosts “I am a Man,” a virtual conversation with two award-winning Miami Herald journalists, columnist Leonard Pitts Jr. and visual journalist Carl Juste, about Juste’s newly installed public artwork on the MOCA Plaza. The virtual panel will be moderated by Donnamarie Baptiste and aired live on Zoom. Information at mocanomi.org; click on “events.”

▪ July 9: NSU Art Museum Fort Lauderdale and the Consulate of Japan in Miami are hosting a lecture by James B. Levy on Japanese Kaiju toys and contemporary art. It launches at 6 p.m. on the museum’s YouTube Channel. Information at nsuartmuseum.org

The museum also has launched its new online catalog with more than 2,000 artworks.

▪ July 15: Oolite Arts hosts a virtual film festival of Miami-made cinema featuring 12 short films at 7 p.m. The three-minute shorts were made during two weeks of quarantine. Information at oolitearts.org.

Like many other local galleries, Coconut Grove’s LnS Gallery is now open by appointment. Its next show is “Summer Highlights” featuring the work of 22 artists. Check out online studio tours with Tim Buwalda, Natalia Garcia-Lee and William Osorio, at lnsgallery.com.

ICA-Miami is hosting a variety of films, talks and educational events online, along with its monthly First Fridays program. Information at icamiami.org.

What's in a nickname, mascot or sports tradition? Sometimes tinges of racism

Fri Jul 3 , 2020
Washington Redskins owner Daniel Snyder is shown before a game against the Buffalo Bills on Nov. 3, 2019, in Orchard Park, N.Y. (Adrian Kraus / Associated Press) The “Gator Bait” chant had long been a staple of college football, a way for Florida Gator fans to taunt opposing teams. As […] 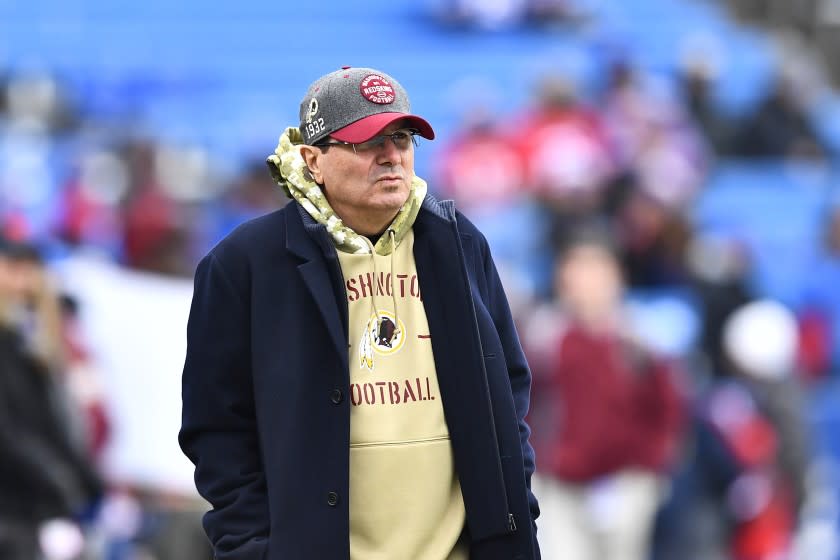