Click here to read the full article. LONDON — She may be a young British blonde with a glam job in media, questionable coworkers and a natural writer — but she’s no Bridget Jones. She’s Margot Jones, fashion editor at the fictional magazine Haute, and she’s got a lot more […]

LONDON — She may be a young British blonde with a glam job in media, questionable coworkers and a natural writer — but she’s no Bridget Jones. She’s Margot Jones, fashion editor at the fictional magazine Haute, and she’s got a lot more on her mind than weight loss, chardonnay and unrequited love.

Jones is heavily pregnant, and not sure whether she can trust the young woman who’ll be her maternity leave replacement, the insecure and ambitious Maggie Beecher. To add to her woes, Jones’ best friend has just lost a longed-for baby and, inexplicably, refuses to return her calls and texts.

Unlike Bridget, who never held back, Margot also harbors a few guilty secrets.

The two rivals — Margot and Maggie — are the central characters in Harriet Walker’s debut novel, “The New Girl,” (Hodder & Stoughton) a pacy, suspenseful read that takes in female rivalry, envy, pain and the inevitable feelings of paranoia and guilt that come with taking temporary leave of a beloved — and covetable — job.

“The New Girl” is also a story of the moment: Walker takes on knee-jerk commentary, bullying and harassment on social media; the fragility of mental health, and the feelings of terror and isolation that penetrate anyone’s life, at any time, no matter happy, healthy and successful they may be.

The book has its darkly comic moments, too, in the form of a Champagne-chugging p.r. and Haute’s editor in chief “Moff,” who tells the plain, striving Maggie, “We’ll make you fabulous — plenty of Photoshop” ahead of her first fashion shoot.

Walker, who studied English at Cambridge University and is currently fashion editor at The Times of London, said she drew partly from her early career working in the fashion closet at British Glamour (now an online-only publication, with a much smaller closet) and experiences writing for Vogue, The Independent and other British media.

Fashion, though, is really just the backdrop. Guilt, fear and female dynamics — personal and professional — are what Walker had wanted to address. She said she started writing — for fun — eight months into her maternity leave, and finished “The New Girl,” after returning to The Times, having secured a two-book deal.

While Margot Jones may struggle with leaving work and becoming a mother, Walker says she did not.

“I didn’t have a difficult maternity leave at all, although it’s hard, and I was surprised by how much guilt I felt — about everything. I felt guilty because I was missing my job; guilty for not being at work and for not doing it right with my daughter. Then, I was aware of people who couldn’t get pregnant or who’d had miscarriages,” Walker says, adding that she also felt under pressure to be grateful “all the time” for having had a baby.

Walker also wanted to highlight the fractious online environment, which is why the book is peppered with some chilling Twitter exchanges. Walker — like anyone who expresses an opinion on social media — has been the subject of vicious attacks for articles she’s written, including a recent one about trying to work at home, under lockdown, with a small child.

Trolling, she says, has become a fact of life. “You have to expect someone you don’t know to be unpleasant to you online at some point in your life — or on a regular basis. It’s something we all have to deal with, especially as journalists. There is a rabble waiting on Twitter.”

In the book, Walker says she wanted to amplify “that feeling of someone watching you and constantly looking over your shoulder and noting down the things you’re doing wrong,” and writing in Twitter exchanges was a useful vehicle for that.

Walker certainly isn’t alone in speaking up about the free-floating anger online; lack of considered, nuanced debate, and tolerance for different opinions and points of view.

Earlier this week, fellow authors including Margaret Atwood, J.K. Rowling, Salman Rushdie and Martin Amis — as well as many American writers and creatives — signed a letter decrying “cancel culture” and online shaming, where those with potentially unpopular, or non-conformist opinions, are gagged by online bullies. The letter was published on Tuesday in Harper’s Magazine.

Walker says during lockdown and the anti-racism protests, her experience living and working in London has so far been one of “supreme friendliness, with lots of people smiling and chatting from a distance and inventing excuses to say ‘Hello.’ But then you go online, you get a real sense of what this [crisis] has done to everyone’s mental health.

“People are so angry and quick to fight and find offense, whether rightly or not. There’s a lot bubbling under, and I think Britain is in such a weird place at the moment. We’re a divided country, and I don’t know how you fix that.”

Walker, who is still working from home and caring for her daughter with help from her journalist husband, says her next book also looks at female dynamics — and the role that online exchanges have in people’s daily lives.

“It’s not set in fashion, but it’s about a similar demographic of women who are navigating friendships, and whether they bring positives, or negatives, into your life. It also has to do with a similar digital conversation, and how women ‘exist’ online as well. It’s similar — but not a sequel.”

She plants that idea toward the end of “The New Girl.” Margot’s enigmatic best friend, Winnie, talks briefly about “the things people will do online that bear no correlation to their real-life behavior; the things they will say virtually, when they don’t have to see the expressions of those on the receiving end.”

For now, Walker is focused on promoting “The New Girl,” which comes out July 9 in the U.K. With lockdown, it hasn’t been easy.

Walker says she spent 18 months excitedly counting down the days until the U.S. launch in the spring, but then when it happened, there were no bookstores open. Only supermarkets and pharmacies.

Even though lockdown restrictions have eased in the U.K., she won’t be celebrating the launch this week, or any time soon.

“I think the only party you can have at the moment is just like three people standing a meter and a half away,” she says. “So we’re shelving that until, hopefully, when the paperback launches in February.”

And by then the Champagne and chardonnay will — hopefully — be flowing again. 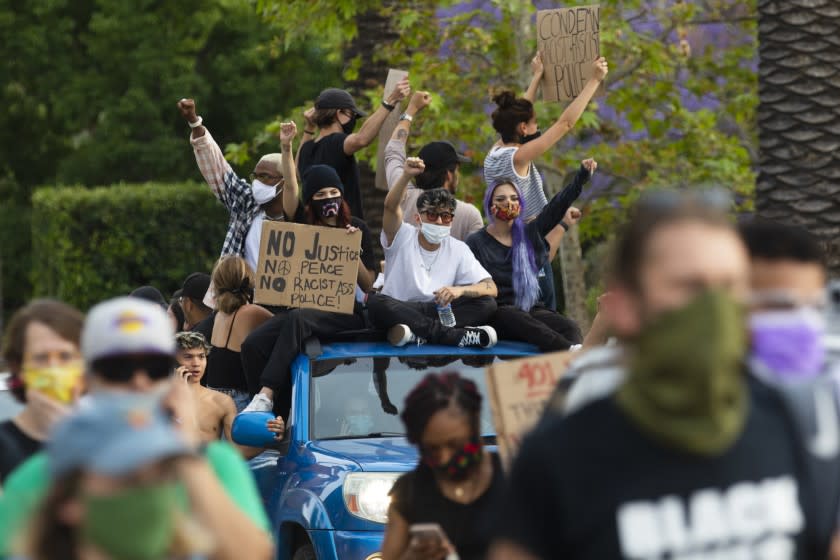