See Full Image Gallery >> The Venza is back. The lifted, wagon-esque crossover that disappeared five years ago was weird, but in a good way, forging its own path by walking a fine line between car and crossover. Yet it also never caught on and was discontinued without being replaced. […]

The Venza is back. The lifted, wagon-esque crossover that disappeared five years ago was weird, but in a good way, forging its own path by walking a fine line between car and crossover. Yet it also never caught on and was discontinued without being replaced. Well, at least not immediately. The 2021 Toyota Venza that emerges after effectively taking a generation off is still weird, but in a totally different way.

This time around, the Venza is a normal-looking crossover in a sea full of them. The new hook? It’s a hybrid, and a hybrid only. Instead of creating its own segment through design, Toyota is taking closer aim at the segment it failed to embrace last time: two-row midsize crossovers, which today feature the likes of the Honda Passport, Hyundai Santa Fe, Ford Edge, Chevrolet Blazer and Nissan Murano. None of those models offers a hybrid powertrain, though.

That raises the question: What makes Toyota think it can succeed with a hybrid-only model? The RAV4 Hybrid is the answer. It’s flying off dealer lots to such an extent that it actually outsold the standard gas-only RAV4 in June. Toyota crossover buyers appear to have a thirst for hybrids, and Toyota is only happy to oblige with another. (That the Venza was already in development for Japan as the next-generation Harrier must have made the decision even easier.)

In addition to sales success and better fuel economy, the RAV4 is a better driver as a Hybrid, with slightly quicker acceleration and its exclusive XSE trim level. Toyota has eliminated that hybrid-or-not choice for the Venza because its engineers and product planners believe this is the superior powertrain in every way. We won’t get to find out otherwise, either. The Harrier’s base 2.0-liter naturally aspirated four-cylinder, which is shared by the Corolla and Lexus UX, is understandably a no-go in America for a midsize crossover. And there are no plans for a more powerful, gas-only option, nor a plug-in “Venza Prime,” either. Toyota firmly quashed the possibility.

Thankfully, the Venza’s hybrid system is a good one. It’s a familiar one, too. Toyota has repurposed the RAV4 Hybrid’s powertrain for duty here, bringing along the 2.5-liter four-cylinder and trio of electric motors. The one powering the rear wheels effectively gives the Venza standard all-wheel drive. The one difference is battery makeup. In the RAV4 Hybrid you get a nickel-metal hydride pack, whereas the Venza uses a lithium-ion battery pack. Toyota says this is due to the RAV4 being built in Kentucky, while the Venza/Harrier is built in Japan.

This hybrid system has been re-tuned for the Venza, but operates in practice just like RAV4 Hybrid’s and even boasts the same 219 combined horsepower rating. Fuel economy is almost identical to the RAV4, as the Venza returns a manufacturer-estimated 40 mpg city, 37 mpg highway and 39 mpg combined. Those numbers are spectacular for the vehicle’s size and absolutely demolish its non-hybrid competition in terms of efficiency.

When we get to design, the Venza argument starts to take a wrong turn. It looked perfectly fine in photos of the Limited trim online, but our XLE test car was a rude surprise. To be blunt, it looks like two people designed the car without talking to each other, one for the front and one for the back. In the front, it’s tall, bulbous and round with a strange shield-like grille tacked on above the horizontal-slatted grille. The look is definitely worse in white, as photos of other colors depict a more acceptable appearance. Those fake vents in the bumper are also awkward and out of place.

It’s perfect from the rear doors on back, though. A taut, muscular line bulges out of the rear quarter panel that leads into the thin taillights and sharp rear leading edge on the hatch. It’s quite striking with the full-width red bar and long spoiler that juts out over the sloping rear window. That rear window slopes so much that the Venza’s chief engineer, Toshiaki Kojima, went so far as to say the Venza had coupe-like styling. Toyota is not going full German and calling this crossover a coupe, but it’s not shying away from that sporty design language, either.

As a direct result of this style-over-utility design choice, the Venza has just a touch less cargo space (36.3 cubic feet behind the second row) than the RAV4 (37.5 cubic feet) despite being 5.7 inches longer overall. Rear legroom is identical as well, but that says more about the RAV4 given their equally generous amount. Thankfully, the Venza’s roofline doesn’t cut into rear-seat headroom enough to be bothersome unless you’re especially tall, but the optional Star Gaze fixed glass roof does. It drops rear headroom by a significant 2.1 inches. That said, it isn’t just a plain old glass roof. Like roofs of several high-end Mercedes, Star Gaze basically frosts the glass on command to keep the sun’s rays out. There’s a shade that can be closed, too, in case you want to completely block out the sun’s heat.

It’s a cool, premium feature and just one of many elements that help the Venza make the claim of being a style choice over the RAV4 (unlike the exterior). Contrast stitching, luxury-like piping, well-placed bright accents, and premium materials abound, making it look and feel more like a base Lexus than a Toyota. The doors are covered in multiple, separate pieces of soft-touch surfaces; its two-tiered dash design screams luxury, and the dominating center stack is a pretty sight to see with its curved center console. Toyota keeps giving its cars better interiors, and this is the best of the new bunch so far.

The big dash-top screen is the interior’s centerpiece. It measures 8 inches on the LE and XLE, but a 12.3-inch unit is optional on XLE and standard on Limited. It’s identical to the one that so impressed in the Highlander. With either screen size, Apple CarPlay, Android Auto and Amazon Alexa come standard. There’s an additional display in the gauge cluster measuring 4.2 inches in the LE and 7 inches in the others. In general, the Venza’s tech offerings are up-to-date with the competition, and if it were quicker to respond, the 12.3-inch system in particular would be a standout.

Less successful are the touch-sensitive buttons for the climate and audio systems found on the two upper trim levels. Unlike in the LE, there are no knobs or physical buttons. It makes for a clean, modern look, but tapping a painted icon on a glossy panel to turn up the volume or temperature is quite simply inferior to turning a knob or pressing a button you can find by touch — rather than looking away from the road. Controls like these were annoying with Cadillac CUE, MyFordTouch and a variety of other brands that tried something similar years ago … it’s no more successful or user-friendly here.

The Venza may look like a sporty crossover, at least from the rear, but it’s not an invigorating crossover to drive. Toyota doesn’t provide a 0-60 mph estimate, but the RAV4 Hybrid gets there in 7.8 seconds. A Venza is approximately 130 pounds heavier than the RAV4 Hybrid — it should therefore be even slower, putting it well in the rearviews of most competitors. At least it feels quicker off the line than numbers may suggest due to the electric motors, but like all Toyota hybrids, there’s plenty of droning under full acceleration that does little to convey a sporty intent.

Toyota says it was able to improve the ride comfort over the RAV4 through a newly tuned suspension. All the underpinnings are extremely similar, though. The Venza rides on the same TNGA-K variant of Toyota’s corporate platform and even shares the RAV4’s 105.9-inch wheelbase. Road imperfections and potholes are soaked up admirably, and highway cruising is both quiet and comfortable. However, the wind and road noise is not reduced to Lexus-quiet levels of serenity.

At no point does the Venza ever encourage the driver to push it through a winding road. The rear electric motor does a bang-up job of keeping the front wheels from being overwhelmed, but this is no performance-oriented all-wheel-drive system. The eco tires give up quickly, and you can really feel the heft of the tall body around corners. Look at an Edge or Blazer if you want something that’s a bit more fun and lively to drive, because the Venza is for somebody with their priorities centered around fuel economy and comfort.

The driving position matches its character. You sit up high and look over a long, imposing hood. Visibility is decent out the slanted rear window, but the Limited trim brings a rearview camera mirror for an even better view out.

When the Venza goes on sale this September, it’ll start at $33,645 for the base LE trim. An XLE (the one we drove) is $37,175, and the top Limited trim starts at $40,975. All those prices are higher than the RAV4 Hybrid in equivalent trims, but Toyota sees the Venza as the more premium offering. You’re paying for the styling (better and worse), near-Lexus grade interior, a better ride, and the ability to add premium features like the Star Gaze roof, head-up display and big 12.3-inch screen.

Compared to others in the midsize class, though, you’re getting a crossover with less backseat room, average cargo capacity and slow acceleration. It gets vastly better fuel economy, which is what Toyota is really banking on here. If efficiency is king, the choice will be obvious. If anything, the biggest roadblock will be the RAV4 Hybrid sitting next to it on dealer lots.

Cancer or coronavirus? I survived one Big C but now I'm living in fear of another

Wed Jul 22 , 2020
A radiologist examines mammograms on a lightbox: Rex/Shutterstock “Excuse me Mrs Meyer; dark skin is always difficult.” Like clockwork, the phlebotomist mouthed the standard German excuse for why she was going to keep sticking needles into my arm, in her persistent quest for blood. I’d opened my mouth, ready to […] 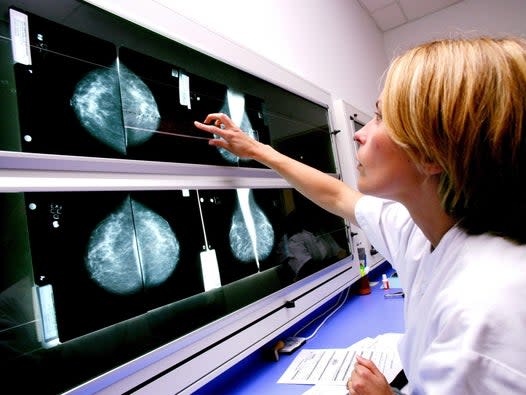